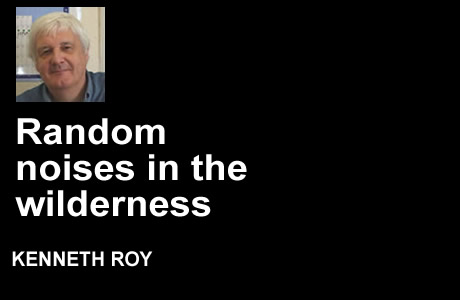 Metaphors of the morning
Uncharted territory. A mapless no-man’s-land invoked by politicians who haven’t a clue what’s going to happen next. That’s pretty well all of them. A particular favourite of our very own first minister, who uses it habitually in media interviews.

Shark-infested. One to look out for is Farage, which is noted for its acute sense of smell that allows it to detect Remainers in the water from miles away. Farage swims through the ocean with its mouth open wide, filtering large quantities of political plankton.

Back burner. The bit at the back of the stove where the UK and Scottish governments, overwhelmed by the constitutional crisis, have conveniently shoved their policies. From the back burner, some will be kicked into the long grass, never to be seen again.

Shock of the morning
The nation is still reeling at the news that the Scottish cabinet 'met on a Saturday', an unheard-of occurrence indicating the gravity of the situation.

Sayings of the morning
'I’m not racist, but I just think they should all go home’.
'Not all Brexiteers are racist, but all racists are Brexiteers’.

An independent Scotland’s currency of the morning
Either the pound or the euro. It changes from day to day according to the whim of the first minister. There is, however, a possibility that Scotland will soon have its own currency, the European-sounding Nico. 'Packet of fags, please’. 'That’ll be 50 Nicos, pal’.

Kezia of the morning
We await the current wisdom of the Scottish Labour leader. On Friday she was rejecting any idea of a second independence referendum, claiming reasonably enough that it would lead to further turmoil. Twenty-four hours later, after a chat with her trade union chums, 'all options’ were suddenly open. For vision and consistency, you just can’t beat oor wee Kezia.

Metamorphosis of the morning
Johnson, who celebrated victory by playing cricket with the brother of the late Princess of Wales, thus confirming his reputation in Sunderland as a man of the people, now describes himself as 'a liberal Tory’. It can only be a matter of hours before he is proclaiming his new-found credentials as 'a One Nation Tory’.

Joke of the morning
Nothing has yet superseded the speech of Uriah Gove – widely renowned as the nastiest bit of work in Westminster – following the ritual beheading of the obscure martyr Dave Cameron.

Statistic of the morning
UK GDP will be 6% lower in 2020 than it would have been if the UK had stayed in the EU (Source: Economist Intelligence Unit).

Mystery of the morning
Why newspapers are still commissioning opinion polls. The Sunday Post was so impressed that, in the immediate aftermath of Brexit, 59% of the Scottish electorate were supporting independence, it splashed the figure across its front page. It seems the editor of the Sunday Post, Francis Gay, has still not grasped what is axiomatic: that if an opinion poll says one thing the opposite is invariably true.

Amnesia of the morning
Farage’s claim that the great revolution was achieved 'without a shot being fired’. How quickly Jo has been forgotten.