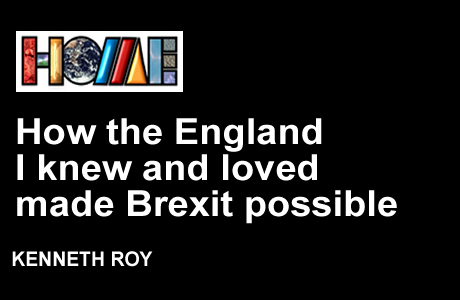 I
'Isn’t history beautiful?’ – Marine Le Pen to Nigel Farage after his speech in the European Parliament, 28 June 2016

Twenty years ago, in June 1996, I came to the end of a year-long assignment for the
Observer (newspaper), a series of weekly despatches entitled, with embarrassing over-statement, 'Kenneth Roy’s Britain’. It amounted to nothing more than a collection of sketches from a different location every week; for various reasons it was not the happiest experience. But it did give me an opportunity to travel more or less the length and breadth of a country that had until then been largely unfamiliar to me. I saw a lot of England.

The events of the last week have sent me scurrying back to those articles, a body of ancient work in journalistic terms, which had been anthologised in a short book. I was looking for clues to the present condition of England, a country now exposed to the world’s ridicule and disdain, yet a country that I chronicled with critical affection week after week in a newspaper.

Had I, during those random travels, missed something about the essential condition of England? The alternative seemed barely conceivable: that it had metamorphosed in some profound way between the summer of 1996 – the last summer of Conservative rule before the advent of Tony Blair’s cool Britannia – and the summer of 2016 – the summer of Brexit, Farage and Johnson – without anyone really noticing.

I wasn’t completely blinkered (I can say that now, having re-read the book). Clues there were. But I was a poor detective. I made no attempt to find a pattern in them; I failed to discern how beautiful history is made.

II
One evening in the winter of 1995-96 I arrived in Castleford, a small ex-mining town in Yorkshire, without a plan. It was not quite 7 o’clock – I noted the time – and the streets of Castleford were deserted. I went to a taxi office and asked if there was anything happening, anywhere I might go for amusement or distraction.

They suggested the dogs, so I went to the dogs and collected my sketch for the week. On the way there, I was impressed by the sight of smart-looking modern factories and 'enterprise parks’ on the periphery and I remember thinking that, despite initial appearances to the contrary, there was some activity in Castleford – that it hadn’t been left behind after all. But the absence of any visible sense of community impressed me too; I wondered where all the redundant miners drank, for the few pubs were empty, miserable dens. Castleford might have been the most dispiriting place I encountered in all of England.

I went to a second ex-mining town, Spennymoor – part of young Tony Blair’s constituency, as it happened – to meet an artist whose work I admired, Norman Cornish, an ex-miner himself, and asked about his painting of a fish and chip shop, O Eddy’s, that I’d seen in the Laing art gallery in Newcastle-upon-Tyne. Mr Cornish explained that O Eddy’s had been demolished long ago. They’d built a car park on the site.

Without stepping out of Spennymoor, Norman Cornish had created a metaphysical universe through his work, painting the faces of the miners and their wives and giving them a spiritual quality. There were no pits left. Mrs Thatcher had seen off the coalfield of County Durham too. Mr Cornish lamented the loss of companionship in the mining community; he felt it keenly.

After leaving him, I noted down the names of the factories on the outskirts – Electrolux, Thorn EMI, etc – just as I had on the road to the dogs at Castleford, and again lazily reassured myself that everything was all right.

In Newcastle itself, I spent a meditative afternoon in the Silent Room of the 200-year-old Literary and Philosophical Society, a room guarded by the statue of Trotter Brockett, a local philosopher. The people at the Lit and Phil instructed me in the history of the institution. They said it had been the product of an age of inquiry, in which intelligent people were excited by ideas and restless to extend the boundaries of knowledge. We discussed what had happened to that spirit of inquiry and they assured me that it had been formalised in higher education. I was a little sceptical.

That night, the streets of the city were packed with young people, many incapably drunk, spilling out of clubs and bars. The hysteria in the air may have been slightly disturbing, now that I come to reflect on it.

In Manchester, the ‘shock city’ of Victorian England, where Friedrich Engel’s experience of working in his father’s cotton factory helped to inspire the Communist manifesto, the gay village in Canal Street was being stalked by drug barons from Salford – 'virtually untouchable’ according to the local press – and one estimate put the value of the illicit ecstasy trade at £100,000 a week. Manchester felt close to anarchy; I wondered in print why any criminals in modern Britain should be 'virtually untouchable’ and invited the chief constable to do something about it. I didn’t hear back.

The most desperate place I visited was Castle Vale, an estate on the edge of Birmingham. In 1969 they had moved 20,000 people from the Edwardian slums of the city centre to the site of a former aerodrome and dumped them there in 34 high-rise blocks, badly built and ruinously expensive to heat. I picked a hazardous route through broken glass and pigeon droppings to the only shopping centre, whose gable end was plastered in BNP slogans. Castle Vale, a ghetto of poor whites, had long been targeted by the far right as a fertile recruiting ground.

An 'action trust’ had recently taken over the running of the estate from the city council. Unemployment was 26%, more than half the pupils at the local school left without a single qualification, and the health of the population was so wretched that a quarter of the houses had had to be physically adapted. Ten years later, curious to know what had become of Castle Vale, I discovered that £200m of public money had been lavished on it but that it remained an area of multiple deprivation.

Among my rural excursions, I have a special reason for recalling Diss, a market town in Norfolk, where that melancholy observer of the English scene, John Betjeman, had once enjoyed a drink in the Jolly Porter. My newspaper had paid me no expenses for weeks; I was running short of money and phoned the newsdesk in desperation from a call box (that was how it was done in 1996). Then I asked someone for directions to the Jolly Porter. She replied that the old woman who owned it had had a fall and retired. The pub had been demolished and they’d built a cement works on the site. A car park in Spennymoor; a cement works in Diss – it made no difference; everywhere I went, it felt as if I had just missed England.

Diss wasn’t much of a market town any more, and over a pub lunch I heard ruddy-faced regulars in Barbour jackets talking contemptuously of London and of the metropolitan opinions in newspapers and on the BBC; they had no time for any of them. I wondered why people who could afford Barbour jackets were so resentful, considering that, to this outsider, Diss felt like an agreeable place to live – more agreeable, certainly, than the tinderbox of Castle Vale.

But I must have sensed something about Diss. It was snowing quite hard and I ended the piece by observing that it seemed to be settling on the local office of the Child Support Agency and on the claimants’ letterbox of the DSS.

So many clues pointing in so many directions, yet I didn’t make much of any of them. Nor, however, did anyone else.

III
Now I look at the results of last week’s referendum. Of the places I have mentioned, only Manchester voted decisively to Remain; and even there, four out of every 10 were for leaving.

In North Norfolk – the local authority area of Diss – the Leave vote was 59%; I imagine the ruddy-faced regulars, now grown old, were among the keener opponents of the European Union. In Wakefield – of which Castleford is part – it was 66%; whatever the branch factories and the enterprise parks did for the people, it clearly wasn’t enough. In Tony Blair’s old constituency, the home of Norman Cornish, it was 61%.

Birmingham also voted to leave, though much more narrowly; one can only surmise how the electors of Castle Vale may have contributed to that outcome. And Newcastle, to the dismay of many on referendum night, was only marginally Remain; earlier this week, not far from the home of the Lit and Phil, a huge banner appeared. 'Stop the immigration, start the repatriation’, it read. In these ways, what Marine le Pen calls beautiful history has been made.

Next edition of the Scottish Review: 30 June 2016
Subscribe Today