I
Just before the holidays, the literary critic Stuart Kelly telephoned out of the blue with an unusual request. Would we mind if he recommended the Scottish Review for a Creative Scotland grant? We didn’t mind. It was, admittedly, a bit of a nerve on our part: SR has been among the fiercest critics of Scotland’s arts funding agency, whose first chief executive was moved to write a long letter of complaint and self-justification. (He was soon gone.)

As Mr Kelly explained it, the proposition had a certain appeal. The serious press in Scotland, what’s left of it, had so reduced the amount of space it devoted to literary criticism that the intellectual life of the country had begun to suffer. At the same time a gap in the market had been created, a gap that the funding agency intended to fill with some cash – I have forgotten how much. It proposed to use the money for the encouragement of 'emerging critics’.

It was Mr Kelly’s opinion that the Scottish Review and Bella Caledonia should split the loot, which would then be passed on to the 'emerging critics’ in the form of editorial fees. It was a neat combination: SR, politically non-aligned and non-ideological; Bella, one of the more thoughtful of the many nationalist publications. There seemed to be no harm in the idea and possibly some good. While we would take pleasure in publishing new talent, our continued existence was unaffected one way or the other. We could go on writing nasty things about Creative Scotland in the certainty that if we were punished for our ingratitude, we would simply press on.

He was soon back in touch with the news that Creative Scotland had declined his pitch on our behalf. Rather it had decided to give all the money to one of its existing clients, the quarterly Scottish Review of Books, edited by my old friend Alan Taylor.

I was neither surprised nor disappointed. On the one occasion in the distant past when I accepted public money – I was editing a theatre magazine at the time – the literature director of the Scottish Arts Council, Trevor Royle, subsequently imposed a condition that I should appoint a committee of approved persons to oversee the arrangement. Better die than be supervised by a committee. We chose death. Now, many years later, I could all too easily envisage the same sort of complication.

Nevertheless, I couldn’t help feeling that an opportunity had been missed. A modest grant to two non-mainstream titles would have represented a slight but welcome diversification of Scottish cultural policy. Instead we are left to marvel at the confirmation of Alan Taylor's pivotal role in literary Scotland and the extension of his magazine’s considerable powers of patronage.

II
After our rejection by Creative Scotland – on which I intend to dine out for some time – I read with more than usual pleasure the excoriating critique of 'Scotland’s arts police’ by James MacMillan in a recent edition of the Spectator magazine. The point of the piece was to expose the tiny group who control or influence cultural policy in Scotland, most if not all of whom eagerly buy into the nationalist project.

Alan Taylor didn't rate a mention, but most of the usual suspects were there, including the leading critic who knows few if any people in the arts who believe in the continued existence of the UK; the columnist on the same paper who wants portraits of Liz Lochhead and James Kelman in the Scottish National Portrait Gallery in place of fuddies like Allan Ramsay; the far-left 'publisher and activist’ who advocates a 'social audit’ of all government officials and public employees in an independent Scotland – a truly sinister thought; and the coterie of academics who sit on all the right judging panels and decide which authors, poor sods, are deserving of public support.

In this climate, according to James MacMillan, J D Fergusson is now rated greater than Matisse, Hamish MacCunn greater than Mahler, Alasdair Gray greater than James Joyce, while the revered journalist Neal Ascherson enjoys the same uncritical esteem formerly accorded to the late Queen Mother: ie, it is bad form to criticise his work and those who do so – Andrew O’Hagan is a guilty party in this respect – run the risk of personal invective from his more ardent supporters.

Similarly, any impugning of the good name of Alasdair Gray is beyond the pale, even (or especially) after his famous attack on English 'colonists’ who work in Scotland, apparently for the exclusive purpose of furthering their careers. No-one pointed out at the time – I wonder why – that the main colonist in Dr Gray’s sights, the theatre director Giles Havergal, is not English (he was born in Edinburgh, the son of Dr Henry Havergal, former principal of the Royal Scottish Academy of Music and Drama) and that he devoted most of his working life to the Citizens’ Theatre. Whatever one thought of his management of that institution – not a lot in my case – it was transparently absurd to label him a colonist (or even English).

I find it impossible to reconcile the present Alasdair Gray with the amiable version I knew in the 1970s, when he was more renowned as an artist; a splendid triptych of his hung about the house on long-term loan and I produced one of his early plays (no Arts Council grant for that either). He was an endearing character then. How endearing now? I wouldn't know. But It is disturbing that someone whose public utterances stirred up so much anti-English prejudice – even if that was not his intention – has somehow become the cultural icon of the nationalist movement – 'a man of the people, writing for the political realities and aspirations of the new Scotland’, as James MacMillan describes his standing with the cultural commentariat.

More disturbing still, though it is difficult to know how much credence to give it, is the claim that teachers have been coerced into promoting Scottish literature regardless of its quality. It is right that Scottish literature should be taught in schools. Far too little of it was taught in the past. But if James MacMillan is correct that there has been government meddling in the selection of texts, it is time to worry about the politicising of the curriculum. He quotes Stuart Kelly’s view that, in this new Scotland, 'the primary function of studying Scottish literature is to discover its vexed relationship to the constitutional settlement' – a notion that Mr Kelly rightly condemns as crass. But the academic community is muted on this point. The teachers themselves talk in off-the-record whispers, if they talk at all. These are symptoms of the new Scottish malaise.

III
James MacMillan’s article implicitly poses a larger question about freedom of expression in nationalist Scotland. If the intellectual left have, almost without exception, committed to the SNP’s vision of an independent nation, where does that leave their critical faculties, individually and collectively? Opposition, the little it amounts to, comes from a handful of right-leaning unionist commentators producing too much copy for their own sanity. Meanwhile, such deluded schemes as the named person are introduced virtually unopposed (the Scottish Review was not only the first publication to challenge it, but for a long time the only one – as the parents gratefully acknowledge).

Humiliatingly for Scotland, it was left to a bench of judges in London to expose an obvious affront to human rights. From north of the border, there had been mostly silence: another symptom of the new Scottish malaise.

This is the nature of the malaise: it seems that everyone has too much to lose by challenging an increasingly monolithic political establishment, particularly when the most influential voices in the arts and media have allowed themselves to become cheerleaders for that establishment. Is this really how a healthy democracy should function? Journalism works best when it is scrutinising and challenging the established order, not meekly acquiescing; the same is surely true of fiction, poetry and the performing arts. But in Scotland the normal rules of engagement have been turned on their head: if we know what is good for us, we sing from the same patriotic song-sheet, picking up our allotted crumb from the breadboard of Creative Scotland, hoping for a good review from Alan Taylor, hearing no evil, seeing no evil, until the last dissenter has been strangled with the last rolled-up copy of the Sunday Herald.

Best, I think, to be an outsider in this suffocating society, and leave the state-subsidised emerging critics to my old friend Alan Taylor. 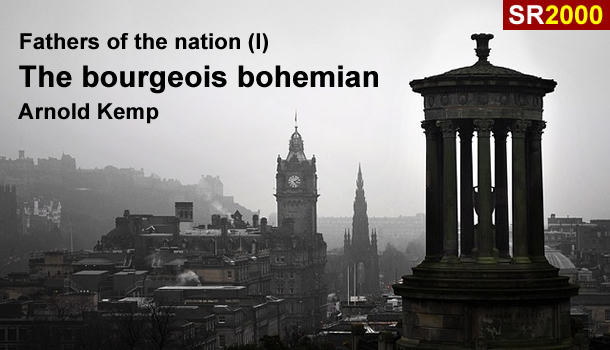 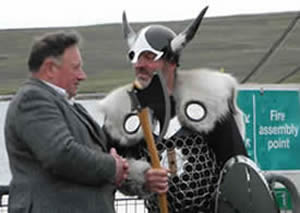 A clash of cultures on Lerwick pier
Photograph by Islay McLeod

Next edition of the Scottish Review: 31 August 2016
Subscribe Today