Three of the key figures in the tangled politics of Lockerbie have now died within four years of each other: Abdelbaset al-Megrahi, the only person ever to have been convicted of the bombing (died 2012), Lord Fraser of Carmyllie, the Lord Advocate who initiated the criminal proceedings against al-Megrahi (2013) and Tony Gauci, the chief prosecution witness (a few days ago). To say that all three left unanswered questions would be one of the under-statements of our time.

Gauci was the owner of a clothes shop in Malta called Mary’s House. It was alleged that on 7 December 1988, a fortnight before the atrocity, al-Megrahi bought some clothes and an umbrella from his shop, that the clothes were wrapped round the device which brought down flight 103, and that al-Megrahi, a former head of security at Libyan Arab Airlines, collaborated with an official of the airline to breach the security at Luqa Airport and get the device on the first stage of its journey as an interline bag to Frankfurt.

But how reliable was Gauci? His credibility took a battering four years after the trial in a remarkable newspaper interview with Lord Fraser. The words attributed to Fraser – he never denied using them – were: 'Gauci was not quite the full shilling. I think even his family would say he was an apple short of a picnic. He was quite a tricky guy. I don’t think he was deliberately lying, but if you asked him the same question three times he would just get irritated and refuse to answer’.

When his successor as Lord Advocate, Colin Boyd, read this assessment of the Crown’s star witness, he asked Fraser to clarify his opinion of Gauci; others, including Tam Dalyell and al-Megrahi’s counsel, William Taylor QC, spoke out more strongly. If Fraser did clarify his opinion, the world was not made aware of it at the time.

Three years later, however, he gave Gauci a friendlier character reference in a television programme about the Lockerbie case: 'I have always been of the view, and I remain of the view, that both children and others who are not trying to rationalise their evidence are probably the most reliable witnesses and for that reason I think that Gauci was an extremely good witness’.

How this statement could be reconciled with his earlier disobliging view of the witness, Fraser did not divulge. But the remarks received little attention, for the story had moved on dramatically: al-Megrahi was now on his way home to Tripoli, released from a Scottish prison on compassionate grounds, having been diagnosed with terminal cancer, after serving eight years of a life sentence for mass murder.

Fraser’s re-evaluation of Gauci as 'an extremely good witness’ looked ridiculous on close scrutiny. When the Scottish Criminal Cases Review Commission had a detailed look at the case, it concluded that there was 'no reasonable basis’ for the judges’ opinion that the purchase of the clothes from Mary’s House took place on 7 December; the commission decided that they have must have been bought on some unspecified date before then.

This was an encouraging finding for the many defenders of al-Megrahi (myself included) who believed that 7 December was the date of his only visit to Malta. But in 2014, in a documentary for American television, Ken Dornstein, whose brother died at Lockerbie, produced evidence which undermined the case for al-Megrahi’s innocence. During 15 years of patient investigation, Dornstein discovered that al-Megrahi had been in Malta in the weeks leading up to the bombing, and that he had company: a Libyan bomb-maker, Abu Agila Mas’ud, who was among those who greeted him on his return to Libya.

With that revelation, somehow overlooked by the Scottish prosecutors, the Lockerbie story became murkier than ever.

There is a fourth 'we shall never know’ that can be stated with a sense of growing probability: that with the passage of time, and as the important players in the saga continue to fall off their perches, we shall never know the truth about Lockerbie.

Ian Jack will be writing in the November edition of the Scottish Review, online tomorrow (Tuesday). SR Daily returns on Wednesday with the latest instalment of David Torrance's American journey

The media pen at a Trump rally can be an uncomfortable place. We’re easy to spot, what with the cameras, lights, computers and cables. Normally, we’re smack-bang in the middle of the hall to give us the best position to film the candidate. This makes us the focus of those who believe Donald Trump when he claims that the media is biased. It makes us easy targets.

I’ve tried engaging with the people who shout. They have a grievance and I’d like to hear what it is – but they just want to talk over me. At first it was just calls and chants of ‘Do your job’, then it moved on to cries of ‘You suck’ while we were broadcasting. Now they openly swear and hurl abuse. I asked one woman if she was aware of my work: the reports on TV and the blogs I’d written. She admitted she had not, it didn’t matter: ‘The media is all anti-Trump’, she said dismissively.

Suspicion of the media is not confined to the Republicans – it’s just where I’ve spent most time. A recent Gallup poll revealed that only one in three Americans have ‘a great deal’ or ‘a fair amount’ of trust in the media.

Attacks on the media from US politicians are nothing new. Lyndon Johnson thought the media spent too much time highlighting the realities of the Vietnam war rather than accepting the rosier official version. Richard Nixon believed the media was biased against him and sent his vice president, Spiro Agnew, on the attack. In a famous speech, he called the news media ‘the nattering nabobs of negativism’.

There’s always concern about how the American media cover politics, but Donald Trump has taken this to a new level. His open hostility to the media, calling them ‘dishonest’ and ‘liars’ and claiming they are rigging the election for his opponent. He used to call out reporters individually.  Now it’s everyone. And that creates a mob mentality, a collective invective against journalists who become perceived as the enemy.

The atmosphere towards the media is poisonous, and it’s getting worse. It is a tactic of political intimidation.

Famously, four years ago a senior figure in the Romney campaign told the media: ‘We are not going to let our campaign be dictated by fact-checkers’. It’s not a surprising position given that campaigns spend millions of dollars telling voters what they should believe. And neither side wants to hear things that could paint its candidate in a bad light.

The Trump team has taken its own steps to sidestep the ‘crooked’ media. It has begun broadcasting an evening show on Facebook where partisans can talk unchallenged, unfiltered and unhindered. It’s picking up an audience in the tens of thousands. It has a place in the media landscape. But here’s the worry. Politics in the US has become tribal.  It’s nasty and bitter and people seek out media outlets which confirm their views rather than challenge them. They want to work with their own ‘facts’.

Strong democracies need a robust media which challenge the powerful, question campaigns, and – yes – even check facts. It may make candidates uncomfortable. It may lead them to incite and fire up their supporters. But it’s a job that needs to be done. And no matter how loud you shout, how angry you get – we’re not going to go away. 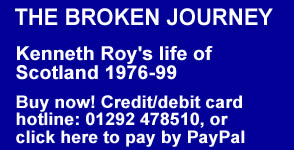