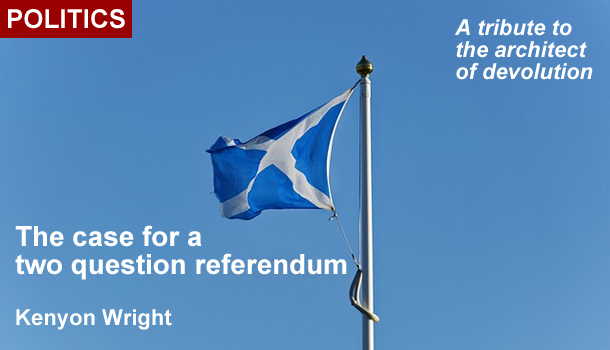 Kenyon Wright, chair of the Scottish Constitutional Convention, who is often described as the architect of devolution, died last week at the age of 84. A supporter of the Scottish Review since its inception in 1995, he wrote for the magazine on many occasions. As a tribute to Kenyon Wright, we republish here an article which appeared in early March 2012 at the start of the referendum process.

If 'politics is too important to be left to politicians', then so certainly is Scotland's debate on her future governance. It is time for us all to stand up and be counted.

I appeal to all Scots, of all parties and none, to ensure that the unique opportunity of the next two years is not squandered or lost, but offers us a real, widely debated and carefully thought-out choice for our nation's future. First, reaffirm the 'Claim of Right for Scotland' which was the founding principle of the Constitutional Convention and is now the policy of the Scottish parliament, accepted by all parties except the Tories.

That Claim is simple. It acknowledges 'the sovereign right of the people of Scotland to determine the form of government best suited to their needs'. It is no dusty historical document. It is of startling relevance, for it denies the right of Westminster to interfere in, or have authority over, Scotland's constitutional choices.

The referendum must be planned, shaped, and implemented in Scotland, including what question or questions should be asked. Our government should indeed listen carefully and with genuine respect to all voices, including those of Westminster, but in the last analysis the decision is ours, not theirs. We should expect every party that endorsed the Claim of Right to support that fully.

Second, we should, I believe, in the consultation process up to May, strongly support the proposal to have two questions on alternative detailed proposals, both to be fully developed in Scotland over the next year or so. One will of course be independence. The second should be full autonomy or home rule for Scotland within what would have to be a reformed union. (Let us please bury for ever the terrible name 'devo max' which not only sounds like a detergent, but perpetuates the idea which Scottish history rejects, that power is graciously handed down from above, rather than lent by the people. 'Power devolved is power retained'.)

Whatever your views, you surely recognise that there are many in Scotland, like me, who will face a real dilemma if we have to say simply yes or no to independence, with the cold comfort of a condescending 'offer', 'say no and we will give you something better'. Where have we heard that before?

But even if Cameron's gracious offer is sincere, it misses the point. The movement that created the Scottish parliament was 'made in Scotland'. When Scots voted in the referendum of 1997 they knew they were voting not just for a transfer of powers or for a mini-Westminster, but for a parliament that had been designed, conceived and carefully planned over six long years of vigorous and often heated debate. I should know, I bear the scars. It was to be a parliament, we said, 'radically different from the rituals of Westminster; more participative, more creative, less needlessly confrontational – a culture of openness'.

That vision has to some extent been fulfilled, but it is time to move on. The point is – and this is what Cameron does not seem to get – that Scotland's parliament was not a gift of Westminster. Home rule was home-made. It must stay that way.

After the 'process' questions are settled, and if as I believe and hope, we achieve the two-question referendum, we have a more important common task, to spell out clearly what each option would actually mean in detail. We need time for a national debate over the next two years to ensure that when Scots vote, we do so with a clear understanding of what we are voting for either way, and how different either is from Westminster's ways.

This unique opportunity will not recur again in our generation. We cannot let it fail.

But Kenyon never got his two question referendum. There was only one question – independence or the status quo