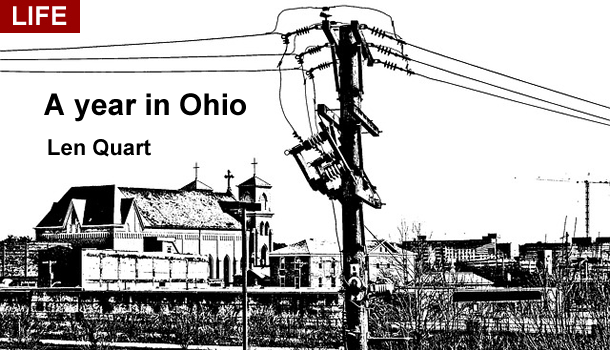 In 1960 I left New York to become a graduate assistant in history at Ohio University, a school nestled in Athens – an Ohio valley town, obviously no relation to the august ancient city-state ruled by Pericles. It was the first time I had left the city for an extended period, and I entered a landscape and social world as different from New York as one could find.

Ohio University (established in 1804) had about 10,000 students and was centred in a depressed rural region of southeast Ohio – part of Appalachia. It was an area of sombre green hills, stark wood-frame houses, and abandoned strip mines that scarred much of the landscape. The university itself was the main supplier of jobs in the region. And Athens was a relatively prosperous, middle-class town well placed in a river valley, and dominated by the college campus that, in a friend’s words, 'had grace and dignity, and looked the way I thought a university should look.'

While the town with its steeples, cupolas, and towers had a great many comfortable homes, the other towns and villages in the area resembled the impoverished, ramshackle rural small communities of Dorothea Lange, Ben Shahn, and Walker Evans’s luminously despairing 30s’ photos. On Saturdays the inhabitants of the towns and small farms would arrive in their banged-up pickup trucks to sell their produce and drink in Athens’ bars, where fights would sometimes break out, and boarded up windows could be seen the next day.

My first memory of Athens was arriving on a Sunday morning, walking the silent, alien cobblestone streets and feeling a sense of profound loneliness and homesickness. I missed the familiar signposts of my New York life: no stolid art deco apartment houses or tenements with stoops, fire escapes and pigeon coops; no honking traffic and wailing police sirens; no bohemian cafes and Irish bars; and no varied and arresting street dramas that gave me so much pleasure.

The first week was painful – I lived in a dank rented room with cardboard walls. It was the size of a large closet and was part of a seedy private home owned by an aged alcoholic couple, whom I could hear wheezing and coughing all night long. That week turned me in on myself, and I indulged in bouts of despair, self-pity and sentimental fantasies about leaving Ohio immediately and returning to the Bronx, which suddenly seemed idyllic – the very same world that I had wanted so much to escape from.

But I was young – 21 years old – and my moods were constantly shifting, turbulent and extreme. Almost by magic, I abruptly left the closet-sized room I inhabited (I found a dark, basement hole of an apartment) and embraced, and was in turn embraced by, a large band of people – writers, painters, sculptors, activists, intellectuals, even an idiosyncratic professor or two – white and black – who came from a variety of places and backgrounds. I still was parochial and smug, and invidiously compared every Ohio experience to its New York parallel, but though I found it hard to admit to myself, I liked being there.

The group of people I got to know was less parochial and more variegated than my New York friends. Among them were my roommate, a solemn, austere, wire rimmed-glasses-wearing Afro-American pacifist and philosophy student; a young, wan, laconic, working-class, hard drinking Beat writer from Dayton who had already knocked out a few unpublished novels; a handsome, articulate, brooding Afro-American cellist – an Athens native with great talent and much submerged anger; a curly-haired, navy-vet surrealist poet, who liked to hop on freight trains; and a languid, bisexual female philosophy graduate student from Oxford, Mississippi who loved Faulkner and talked boozy metaphysics. There were countless others, and though I’ve lost touch with almost all of them, their faces and behavioral tics and patterns remain indelibly embedded in my memory.

In retrospect, the Ohio year was a memorable one. I clearly paid too little attention to my university courses, because I seemed to find time to actively work with my roommate and a few liberal Protestant ministers to lead a social movement that racially integrated the dorms, write embarrassingly sophomoric essays for the literary magazine, and appear on a college radio show with a maverick anthropology professor discussing political and social issues (much too authoritatively). It was all very heady and burnished my fragile ego, and I became enamoured with the role of the melancholy, alienated, left-leaning New York intellectual, which my Ohio friends perceived me to be. I even wrote, at the time, an inflated, adolescent personal essay in which I saw myself as 'the Ahab of Ohio, pouring forth torrents of gloom and negation,' while sitting drinking beer in a local bar.

It was relatively easy to see oneself as an outsider (and at the same time a member of this loose community of artists and deviants of all kinds) when faced daily with a world dominated by provincial and anti-intellectual middle-American values. Beer guzzling, hard-partying fraternities and sororities and weekly football games dominated the school’s life. On fall weekends the games were turned into Busby Berkley-style production numbers with pep rallies, marching bands, and corps of manic cheerleaders doing back-flips.

The crowning rite was Homecoming Day – a day when raucous returning alumni tried to recapture their college years. Thousands of them appeared in the stadium wearing derby hats, drinking out of hip flasks, and bellowing adolescent cheers. They looked just like comic stock characters in Hollywood films that depicted crass businessmen and their wives (eg, Shriners, Rotarians) out on the town for the evening.

The feelings of social alienation that I had felt in the Bronx and at City College were magnified many times over by the Ohio experience. But I gained pleasure and some courage from the feeling of being so different than this world of Midwesterners I saw as variations of SinclaIr Lewis’s Babbit.

I was even investigated by the FBI for asking pointed questions at a screening of a right-wing film that condemned protestors at a House Un-American Affairs Committee hearing. Since I had never been a member of any radical organisation (being always wary of political certitudes and party lines), in the end the FBI absolved me of any 'red' taint.

My being at odds with dominant American values in Ohio gave me a clarity that living amid New York's many complex subcultures had not. It was 1960, and the conformist obsession with material success and social status that characterised the culture of the 50s was still in ascendancy in the Midwest. So when I inveighed against the country’s cultural and political complacency – the general unwillingness to stand up against its dominant norms – I had a sense of being on the side of virtue. At the same time, these buoyant feelings allowed me to hide from my own uncertainty by having an enemy outside myself to blame for the anxiety that plagued me. In New York I always suffered from unease – an intense self-consciousness about my own behaviour – social and even intellectual – that at times paralysed me.

Exhilarating though the year was, I left Ohio to return to New York without regrets. It made me feel good becoming a minor luminary in a place where people treated me as the 'New York intellectual', despite my tendency to exaggerate my feelings for effect and pretend to know more than I did. But I felt the need to return to the anonymity of New York and test whatever talent I had in a larger, more competitive arena. As it turned out, I was returning to the city a relatively more confident and self-aware individual, and for the first time I understood something about the nature of America through direct experience rather than by merely reading books and newspapers.

Of course it took many more years for me to become less anxious and insecure – it was never a simple process. There were moments where I felt my psyche to be extremely fragile, but luckily they were never sustained. A year was not enough time to truly transform myself, but that year at Ohio plainly made a difference in my life, and left indelible memories.