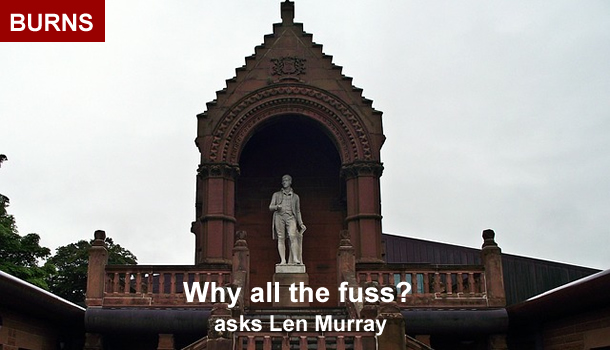 Why all the fuss about Robert Burns? And there is a fuss, a fuss reserved for Burns. We have produced other towering literary figures like Allan Ramsay, Sir Walter Scott, James Hogg the Ettrick Shepherd, and the incomparable Robert Louis Stevenson. But we don't make a fuss about any of them.

And we don't make this fuss about any other notable Scot from any other field of activity. Think of all the great Scottish inventors: John Logie Baird, Alexander Graham Bell, Joseph Lister, Alexander Fleming, James Watt and John Dunlop. The list is endless. During that wonderful golden age of Scotland, the Scottish Renaissance, the age in which Burns lived, we gave the world its leaders in just about every discipline known to man. We were the most literate nation on earth. But we don't make a fuss about that.
Perhaps a part of the answer to the question: 'Why all the fuss?' lies in the genius of Burns.

For he was a genius; multi-sided and of many moods. In his writings we see the whole cosmos of man's experience and emotion, from zenith to nadir; and mankind are born and beget their kind and die; but every time he wrote he did so with a simple beauty that no other has achieved.

Till a' the seas gang dry my dear, And the rocks melt wi' the sun. And I will luve thee still my dear, While the sands o' life shall run.

There are 30 words in that verse and every one a monosyllable. No other poet or writer could use simple words to such effect.

There is no greater poetic tale than 'Tam o' Shanter'. Nor is there any greater satire than 'Holy Willie's Prayer'. And surely the most mournful couplet in any language comes from 'Ye Banks and Braes': And ma fause lover staw ma rose But ah he left the thorn wi' me.

The image of the lassie pregnant and now deserted by the father of the child has never been painted more poignantly.

Who else could find inspiration for a wonderful piece of philosophy from an upturned mouse’s nest:

The best laid schemes o’ mice and men gang aft agley And lea’e us naught but grief and pain.

And only Burns could sit in church and watch a louse crawling on a lady’s bonnet and write: Oh wad some power the giftie gie us to see oorsels as others see us.

Or what about his love songs? Ae fond kiss and then we sever. Words written to Agnes McElhose, Clarinda, in 1791 after they parted and as she was about to set sail for the West Indies. Walter Scott would say of that song that it contained the essence of a thousand love tales. Nancy would write in her diary for 6 December 1831: 'This day I shall never forget. Parted with Burns in the year 1791 never more to meet in this world. Oh may we meet in heaven'.

Or 'John Anderson my Jo', a song that illustrates the genius of Burns better perhaps than any other. For he took what was a bawdy ballad wherein an old lady complains of her ageing husband’s declining virility and he transformed it into surely the greatest hymn to the love between a man and a woman as they grow old together.

The emergence of Burns is all the more remarkable when you look at the age in which he lived. In August 1745 the seven men who landed at Moidart the previous month raised the standard of the royal house of Stuart at Glenfinnan. A torch was thrown on the smouldering embers of the Jacobite movement and they burst into a flame that would last only eight months until it was crushed by the Hanoverian Army at Culloden on 16 April 1746.

The generation which followed Culloden, Burns's generation, was swept by a tide of Anglophilia as all things English were embraced. It began as a trickle in 1603 with the union of the crowns and it became something of a flood after 1707 when the two parliaments were conjoined in the midst of rioting in all the major towns in Scotland. The Kirk proclaimed a national day of mourning to mark what it called 'the humiliation' of our country.

But that tide of Anglophilia did almost irreparable harm to the nationhood of Scotland. For it swept aside much of the language and the heritage of this country. The tide swelled after the slaughter of Drumossie Moor and it reached its high water mark in 1782 with James Craig's New Town of Edinburgh. The sycophantic Craig created a perpetual memory to the family who had presided over the greatest carnage in the history of Scotland when he named the streets of his new town after them.

And so we have George Street, Charlotte Square, Frederick Street and the rest.

And the drawing rooms of the houses in the New Town preferred the new English language and the new English ways. James Beattie, professor of moral theology at Marischal College, Aberdeen, himself a poet of some repute wrote: 'Poetry is not poetry unless it is written in English'.

That was the age in which Burns lived and wrote and that was the society in which his works appeared.

Thankfully he did not think that way and so he wrote most of his poetry in his native Ayrshire tongue. He proved the dignity of his native lowland Scots, and he showed how superior it was to the English tongue by then so commonly preferred. But there is much more to Burns than just his poetry or the language in which he wrote. What mattered much more to him were what he called 'Auld Scotia's Meltin' Airs' – the traditional folk songs of Scotland. These were things which he cherished and he patched and cobbled and polished until he had made them into things of lasting beauty.

Without Burns we would belong to a nation with little traditional song and without him the nationhood of this country could not have survived. These things perhaps explain the importance of Burns to the Scots. But why do other nations make a fuss?

There are Burns Suppers in over 200 countries in the world and it is reckoned that there are three quarters of a million suppers worldwide. His works have been translated into more languages than those of any other figure in world literature.

Perhaps the major reason for his universal popularity is his humanity. The world in which he lived was a world of opulence and oppression. By accident of birth all were born either with privilege or in poverty. With privilege there was wealth and position – with poverty, there was despair and destitution. Inequality and injustice were everywhere. And it was that world of privilege and position, poverty and injustice that Burns constantly condemned.

When he wrote It's comin' yet for a that That man to man the world o’er Shall brithers be for a' that, he was making a statement of egalitarianism that was unprecedented in this country. The ideas of liberty and equality which had led the Americans to independence and would soon lead the French to Revolution were still anathema in most parts of the world and were still regarded here as seditious. So the message of Robert Burns became a message for all people, for all nations, and for all times.

I quote Kofi Annan: 'Let us admire the enduring resonance of the works of Robert Burns. And let us dream as he did of a true brotherhood – and sisterhood – that embraces and encompasses all humankind, and allows all people a chance to enjoy their inalienable rights, dignity and freedom'.

Robert Burns had a message, a message of hope, a message of friendship but above all a message of love for his fellow man; a message that no other writer had ever proclaimed. And that message is just as relevant today as when it was written over 200 years ago.

Whatever mitigates the woes or increases the happiness of others, this is my criterion of goodness; but whatever injures society at large or any individual in it, then this is my measure of iniquity.

And elsewhere he wrote:

God knows I'm no saint: I have a whole host of follies and sins to answer for; but if I could, and I believe I do it as far as I can, I would wipe away all tears from all eyes.

No figure in world literature had ever written with such compassion for his fellow man. Robert Burns is important, not just to Scots people everywhere; but to people of every nation, race and colour whose lives have been touched by his unique genius.

Perhaps his most important legacy is that he did more than any other to preserve the culture, the heritage, aye the very soul of Scotland. And he did it all when Scotland faced the greatest threat to its survival as a nation that it has ever known.

The truth about the Larchgrove scandal
CAFE