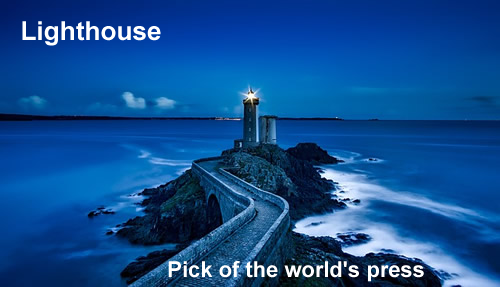 In the Spectator online, Robert Tombs, professor of French history at St John’s College, Cambridge, speculates what would happen if Marine Le Pen became president of France. He predicts 'a genuine crisis, the worst for half a century'.

'There would certainly be strikes and violent demonstrations by those who would see themselves as defending the republic against fascism', he writes. 'How she could form a viable government or win a majority in parliament is unclear. We would see a conflict between the Fifth Republic’s powerful president and its parliament under a constitutional system that one liberal critic has called dangerous even in the hands of a saint. The consequences for the euro, the EU, western security and Britain’s relations with one of its closest allies would be dire'.

Tombs believes it is more likely that 'a very different kind of outsider', Emmanuel Macron, will win in the second round. This would gain him goodwill and authority – for a time. But, says Tombs, his and France’s problems would not be over. 'He is committed to liberal economic reforms likely to arouse widespread and even turbulent opposition. He is a one-man band, and established politicians of right and left have an interest in his failure. He himself will have won only because people who dislike him have seen him as a barrier to Le Pen. She will probably get a higher vote than ever and will continue working inexorably towards the next election'.

Tombs quotes a French friend who said: 'I am not voting for anyone. I’m only voting against'. According to Tombs, this is the depressing mantra of French politics today.

A spectre is haunting Europe, according to a new report by the cross-party think tank, Demos: 'a culture of fear that is finding its form and asserting its growing influence in myriad ways'. The New Statesman’s Julia Rampen, in a piece analysing the report, examines how fear is manifesting itself across the continent. In France, one of the driving fears is terrorism – a response to the Charlie Hebdo, Paris and Nice attacks. More than eight in 10 French people believe another attack is probable. The French are more fearful of globalisation than the British. But while they are also Eurosceptic, only 22% want to leave the EU.