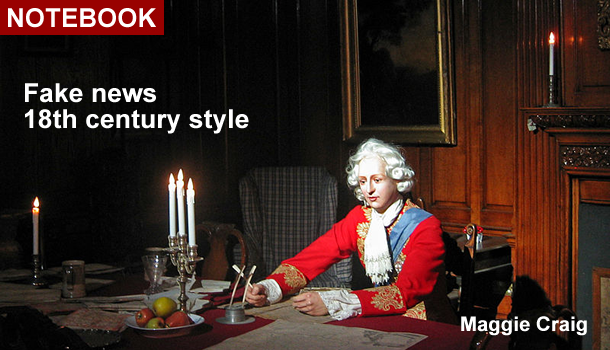 When Charles Edward Stuart led his Jacobite army through England in November and December 1745, one senior member of his staff noted that they seldom saw any children. The reason for this soon became clear. Their parents were hiding them away for fear that they might be eaten by the wild Highlanders. Anti-Jacobite propaganda, spread by the gutter press of the day, had told them the men from North Britain were murderers, rapists and cannibals, particularly partial to babies and young children.

Cameron of Lochiel reassured one woman that he was not going to eat her children before she dared bring them out of the cupboard where she had hidden them. Charles himself did the same for a Quaker woman living near Carlisle, in whose house he was going to spend the night. When he asked about the groaning coming from underneath the bed, the woman burst into hysterical tears. She’d borne seven children, the one under the bed being the only survivor. She didn’t have much food in the house and she was terrified the prince and his companions were going to roast her five-year-old daughter on the spit over the fire for their supper.

I’ve read a lot of contemporary reports on the Jacobites of 1745. I can’t conclusively state that there were no rapes carried out by Jacobite soldiers, although I’ve found no reports of any. I feel I can confidently say that no babies or small children were roasted and eaten. A special edition of the London Gazette also allowed that 'the rebels behaved tolerably well in the march southward'.

People continued to hide their children, though. The Jacobites were a real danger, so they had to be demonised, presented as monsters, other, not people like everyone else. They were also frequently shown in propaganda prints as being in the pocket of the Catholic church and the pope in Rome, a time-honoured bogeyman. You also get the impression that, as has been known in today’s tabloid press, some hacks of the time were simply taking a malicious pleasure in scaring the lieges witless and whipping up a good old panic. 'Strange', mused one Jacobite officer, 'to see the lies spread about us in the English and Scots papers'.

On the other hand, then as now, some clear-eyed folk had no trouble recognising spin when they saw it. One indiscreet or very naive young lady in Edinburgh wrote up a list of other young women she knew and whether they supported the Jacobites or the Hanoverians. One in the former camp was Miss Craig, 'who laughs at the London newspapers for being all lies'. I’ve always rather hoped that the sceptical Miss Craig was a forebear.

Maggie Craig is the author of 'Damn’ Rebel Bitches: The Women of the ’45' and ’Bare-Arsed Banditti: The Men of the ’45.'