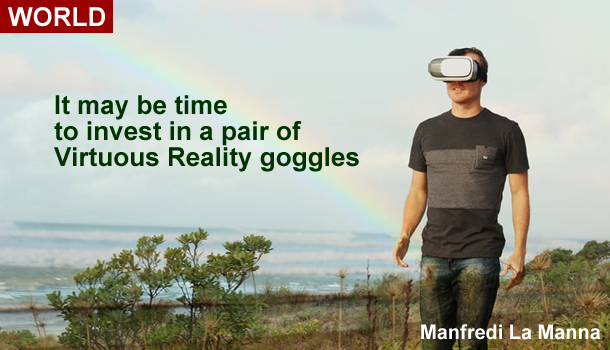 Now seems an appropriate time to defuse the tension created by the demands by European Muslims that their religious practices be respected, clashing with the upholding of the secular values of equality and human dignity etched into European culture ever since the Enlightenment.

Recent events paint a confused and worrying picture: on the one hand, there is the welcome development in Morocco where the 'moderate' king Mohammed VI has banned the production and sale of the burka on Moroccan soil. Strangely, so far the regressive leftists on both sides of the Atlantic who regard the wearing of feature-obscuring garments as a sign of feminist emancipation by enlightened Muslim women have not complained about this brutal infringement of the freedom of their Moroccan sisters to spend their public life in a black bee-keeper outfit that obliterates their individuality as women.

But I am sure that soon voices will be raised in support of the Northern Moroccan National Observatory for Human Development which regards the measure as an 'arbitrary decision that is an indirect violation of women's freedom of expression and wearing what reflects their identities or their religious, political or social beliefs'.

On the other hand, the New York Times has recently reported on the stricter application of Sharia in parts of Indonesia, the most populous Muslim country in the world, which is regarded by some as a prime example of 'moderate' Islam. I put 'moderate' in inverted commas because I do not subscribe to the prevalent (and, in my opinion, deeply offensive) view that a different, and less demanding, set of criteria should be applied to Islam when assessing the reasonableness of religious demands.

According to the latest (2013) report of the respected Pew Research Centre on religious views among Muslims, 72% of Indonesian Muslims favour Sharia as the official law of the country and among them 48% regard stoning as the appropriate punishment for adultery and 18% favour the death penalty for apostates. Admittedly, this percentage compares favourably with 62% in neighbouring Malaysia (not to mention 86% for Egypt), but I find it difficult to regard as 'moderate' a country where over 28 million individuals would be content with killing fellow countrymen merely because they have stopped believing in fairy tales.

The European Court of Human Rights has recently upheld a Swiss court’s decision to fine a couple of Swiss-Turkish parents for withdrawing their daughters from compulsory swimming lessons. Even though the girls had been given permission to wear full-body swimming costumes ('burkini'), the parents objected to mixed-sex swimming on religious grounds. According to the New York Times, the ECHR’s 'ruling could set an important precedent in other cases in which religious and secular values or norms come into conflict.' A German court has recently issued a similar ruling.

Is there not a case for using 21st-century technology to accommodate 7th-century customs? My modest proposal would enable faithful Muslims to display their devotion without coming into conflict with European sensibilities about individual freedom and equality. The main reason why Muslim women ought to keep their hair, if not their whole body, away from the gaze of men is that failure to do so could provoke irrepressible bursts of male lust.

The simple solution I suggest, which could be called Virtuous Reality, is that men who find the sight of uncovered hair or inches of naked flesh too lustful to resist should wear virtual reality goggles which fit every girl and woman with a burka. The wearing of such goggles would identify the wearer as a devout Muslim, just as the wearing of a burka is supposed to do for a woman. Conversely, the refusal to wear the VR goggles would be a sign of impiety for men, just like the refusal to be covered head-to-toe is for women.

The cost of the VR goggles is unlikely to be an issue, as they could be mass-produced in view of their many uses. Recovering alcoholics will no longer be tormented by images of bottles of wines, as the VR goggles can easily perform a reverse Marriage-at-Cana miracle. Vegetarians struggling with beef steaks, pork sausages, and lamb livers blatantly displayed in butchers’ windows and supermarket stalls can see them transformed into aubergines, turnips, and carrots. Annoyed by Celtic FC green-and-white loops? My VR goggles will turn them into a tasteful tartan pattern of your choice.

Alternatively, the mis-named 'Time for Reflection' currently devoted in Scottish schools to para-religious activities could be used by pupils and teachers to learn by heart JS Mill’s essay 'On Liberty', thus acquiring a life-long antidote to intolerance.