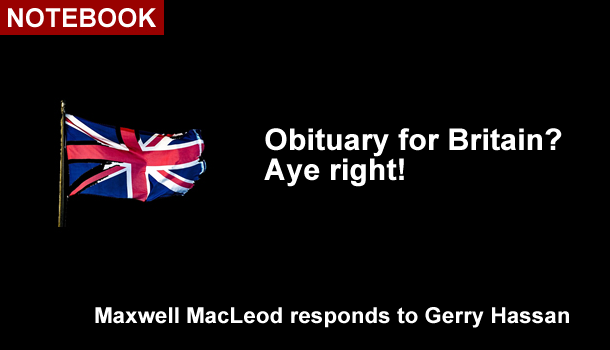 What a moving scene. That great and ever totally objective political doctor of our political time, Gerry Hassan, tells us that he has been crouched over the fallen corpse of Britannia and having held his wee mirror in front of her breathless neb has detected no sign of life. Britain's deid! he tells us.

Ahone ahone! We are all to get out our funeral rags, vote for independence and enter a golden age when the likes of St Alex Salmond will mount his horse (surely a change) and lead us to the world of moral purity that has been so clearly demonstrated by the compassionate way in which the nationalists have been treating each other during the last 20 years of their vicious political infighting. Jings I can hardly wait.

I love Dr Hassan's writing. Admire the man greatly. He certainly gets out of bed. Fair play to him. But when he writes 'It's going to be difficult for many
in Scotland, and for many SR readers, but Britain is over', he is neither at his grammatical, or indeed objective, best. He says it's going to be difficult for many SR readers. Aye, well, he's right wi' this one. I haven't a scoobie what he's on about.

He urges us to cling to the facts. Let us oblige. Now in this post-truth age I have no idea what the facts actually are, and my crystal ball is the size of a pea, but at the very least we should give the home secretary her say. Here's her response to the current claims that she has the compassion of a hungry ferret down a rabbit hole.

She claims that Britain's contribution to the chaos caused by the Syrian conflict has been a staggering £2.3 billion, that in the year up to September 2016 Britain has granted asylum or associated leave to 8,000 children, 900 of whom were unaccompanied, and that she's not shutting the door to the Dubs idea. (Aye, the poor woman really has got into the dubs on this one.)

I don't know enough about whether we should be upping the number of unaccompanied children, but this much I know: that to dismiss Westminster as being nothing more than a nest of selfish vipers is almost as much an absurdity as announcing that Britain is dead. And whilst we are talking facts here's another. Only 36% of the Scottish voters chose to vote yes in Ref 1, and that was before the slump in oil prices that might well have brought us to bankruptcy.

Dustbin of History
Part 4 of the Carole Compton trial

The trick in Scotland
is to cover your back
WALTER HUMES