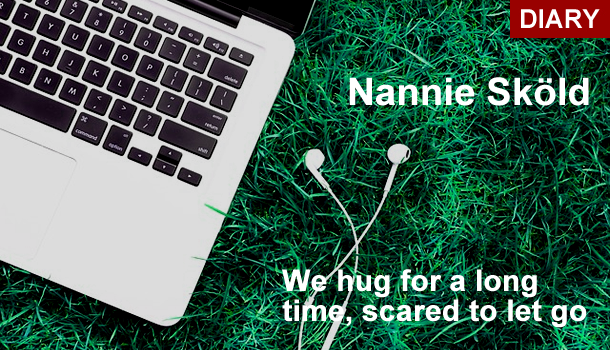 Sunday 19 February
The family with whom I spent my last day in La Linière refugee camp is an Iraqi Kurdish family with three young daughters. We drank sugary tea, sang 'Let It Go', and practised writing the names of different body parts in English. The oldest daughter, nine years old, translated between me and her parents, and was also teaching her younger sisters how to count in French. She told me that she is also the one who translates when they are caught in the back of a lorry by police and asked questions about where they are from, where they are going, and which smugglers they know.

Two days after I had left the camp, I was told that the family had made it across the channel. Fast-forward a few weeks, and they are living in Hull. On Sunday, I went to Hull together with a fellow camp volunteer and close friend of mine to visit the family. Instead of knocking on the thin wooden walls of their shelter, we rang their doorbell, and instead of them opening up to a crowded space serving as storage room as well as entrance and kitchen, we are welcomed into their warm house.

We are all a little shy at first. We hug for a long time, scared to let go, but then don’t know what to say to each other. We keep saying how happy we are. Zor zor zor dlxoshm. (Dlxoshm literally means 'heart good', and it is one of the most beautiful words I have learnt in Kurdish.) Zor dlxoshm that you are finally in the UK. Zor dlxoshm to see you again.

My friend and I bring out the gifts that we’d brought for the family – among other things, a cuddly hairy cow for the youngest girl. Everyone in the family is a bit confused about what animal it is meant to resemble, but after some googling we reach consensus that it is a cow, albeit of a strange Scottish sort.

We ask the girls questions: Do they like Hull? Is the house good? Do they share a room? Breaking into smiles, they beckon us to follow them upstairs, and they will show us. They share a bedroom and a bed surrounded by toy cars. On the walls, they have hung up the same photographs that they used to show me in their shelter. They are photographs of them dressed up, together with friends in Germany, where they were prior to France.

'You want to play?' They ask us eagerly. We play hide-and-seek, and end up having seen the inside of every cupboard, the beds from underneath, and the bathtub from within. Their parents call us downstairs – they have prepared platters of biryani and it’s time for us to eat. Sitting around the table, we ask the oldest daughter if she is practising her English, French and German – languages she learnt whilst on the journey between Iraq and Hull. She tells us that she and her younger sister will start school next week, and shows us the date marked on the calendar on the wall.

They are still in the process of seeking asylum, and there is much more waiting and interrogation to go through before (hopefully) being granted protection and the right to remain. Yet, life is slowly somehow becoming normal again. They live in a house. They are not scared to go outside. The youngest daughter can do potty training. The oldest daughters can go to school. For now, we are zor dlxoshin.

Monday 20 February
Late Sunday night, my friend and I took the train from Hull to Bradford. One of our closest friends from the camp, who has been in the UK since fall, had his substantive interview – the main interview on which an asylum decision is based – on 20 February.

We arrived late Monday night, having stopped briefly in Leeds to change trains. Our friend had prepared Kurdish food for us – rice, chickpea soup, salad, onion, and lemon, always lemon. My fellow volunteer friend and I talked about how settling into Glasgow is going. Our friend told us about the football team he is part of and how he could imagine living in other places in the UK, but he would need to make sure that the football coaches were as good as the one he has in Bradford. We updated each other on the whereabouts of different people we knew in La Linière. Who is still in the camp? Who is in the UK? Who have we lost contact with?

He then tells us that he is a little bit nervous about the interview. He has been going through possible questions in his head. He has been waiting for this interview for many months now.

My friend and I go through different questions that are commonly asked, as a sort of mock interview. We make sure that he knows that he has the right to take breaks at any point, and that he should tell the interviewer if he suspects that the interpreter isn’t interpreting correctly. Our friend has the advantage of speaking English well, and being able to pick up on if information is misinterpreted.

Early the next morning, we set off to Leeds, where the interview will be held.
To enter, we pass through double doors and security scans. I notice a sign on one of the doors saying that the centre is no longer used as a job centre, and redirects jobseekers to another address. Once inside, I realise that they left something behind. In the waiting room there is a large banner saying, 'Yes, You Can Get a Job'. It’s tragically ironic, since a large number of those visiting the Home Office, including nearly all asylum seekers, do not have the right to work.

My friend and I wait for our friend to finish his interview, and hope that when he will finally get his decision from the Home Office, He Can Get a Job.

Nannie Sköld will be contributing a diary to SR every Friday