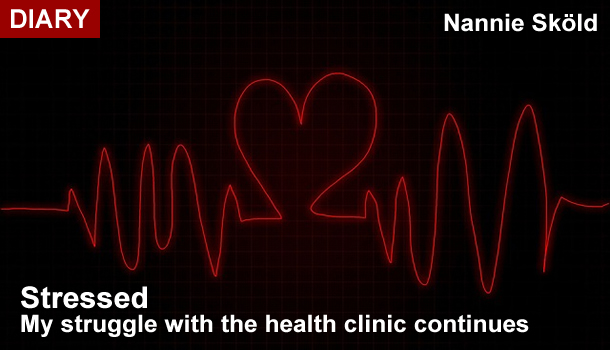 Friday 24 February
A few weeks ago I wrote in SR about being rejected by my local health clinic after receptionists told me that I was not eligible to register with a GP. I returned to the health clinic on Friday. The conversation went something like this:

'Hello. I'd like to register at this practice. I came in a couple of weeks ago and was told that I wasn't eligible, but have since talked to others who think it should be possible'.

'Sweden? I don't think we have an agreement with Sweden'.

The receptionist I was speaking to turned around to ask her other colleagues if they have an agreement with Sweden. Looking confusedly at one another, they shrug their shoulders and shake their heads.

She says she will look it up for me, and that I should go take a seat. A few minutes later, she beckons me forward.

'How long have you been in the UK for?' she asks.

'I studied in Edinburgh for four years, and just recently moved to Glasgow'.

'Oh', she looks at me, interested. 'So you came on a student visa'.

I am not sure if she is implying that I might be overstaying my hypothetical visa. Yet again, I awkwardly mumble, 'I'm from the EU. I don’t need a visa'. (I am tempted to add, 'yet', but refrain from bringing politics into it.)

The receptionist goes to the back room again, and eventually comes back, saying that everything is fine – I can register. She asks me if I need an appointment immediately. She will find me a slot. I am very welcome to the health clinic.

Saturday 25 February
I spoke to a friend who is a few months away from finishing her undergraduate degree in Edinburgh. Along with nearly everyone else in her position, she is not completely sure of what to do next. During the last few months, she has been thinking about going into teaching, and has since applied and been accepted into a teaching programme in Scotland.
However, when we spoke on Saturday, she told me that she is starting to doubt her decision, mostly because of Brexit.

My friend considers Scotland her home, but her citizenship is German. Although she may be more confident teaching in English than in German, in the UK she is required to prove her fluency in English through a long range of expensive tests. She is scared to invest in a Scottish teaching degree without any guarantee that she will be able to stay in the country. What if her right to remain will in the future depend on her income? What if a teacher's salary doesn't reach the minimum requirement?

She also tells me that, although right-wing extremism and nationalism are growing in Germany, the political climate at the moment is more healthy and humane than in the UK. She tells me that it would seem a bit silly to choose to live in a country where there is more hate.

Tuesday 28 February
The same friend shared an article on Facebook about the Home Office's new policies regarding the obligation for certain groups of EU nationals, such as students, to have obtained 'comprehensive sickness insurance'. A long thread of comments followed – many of them from fellow EU students, concerned and confused. Why have we not been informed about this?

In the comments, someone points out that the group in question is already eligible for comprehensive health care through the NHS. The requirement for a separate health insurance is solely for immigration purposes, and has little or nothing to do with health. Someone else comments that the UK hasn't left the EU yet, and perhaps they ought to be reminded of this.

I have continued looking into the policies on comprehensive sickness insurance. The Guardian has published several articles about cases of EU citizens who have been living in the UK for decades, often married to British citizens and with children, who have had their applications for permanent residency denied and have subsequently been told to leave the country. In some cases this was due to the applicant sending a certified copy of his or her passport rather than the original, but in other cases it was due to not having obtained comprehensive sickness insurance.

At one point I tell my partner that I think I have been in the UK unlawfully for the past four years and that I might get deported. He tells me that in that case we can move to Barcelona.