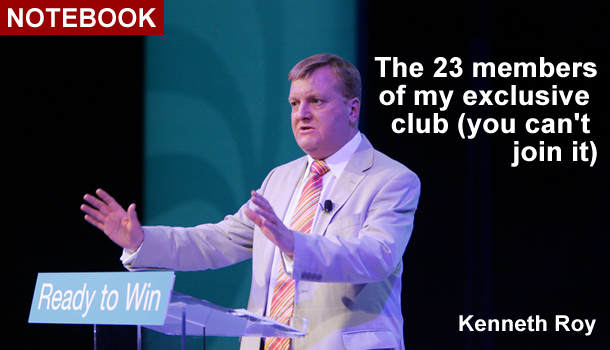 I’m unclubbable by nature, and yet I was once the youngest member of one of Scotland’s oldest and most exclusive clubs. It was called The Thirteen because the membership was confined to that number and not a member more. It met monthly over dinner and the 13 – mostly distinguished academics and literary/artistic figures in Glasgow – took it in turns to present a paper and be interrogated on it by the others. The paper was then lovingly bound in the club’s record. I did hang around long enough to add to the record – I have no memory of what my paper was about – before admitting to Jack House (a great Glasgow journalist of the day, a Thirteener of long standing) that I felt out of my depth, even tongue-tied, in such erudite company and asked to be excused.

Apart from The Thirteen, I have managed to avoid clubs: except the one that I founded myself in 1989, and have chaired with the lightest of touches ever since.

Membership is restricted to 23: a cross-section of the great and good of Scottish society in the late 1980s who appeared as the subjects of my book, 'Conversations in a small country'. Although I didn’t like all my subjects, indeed positively detested one or two of them, I have always felt quite proprietorial about them. I think of them as my personal club. And so, one year at the General Assembly of the Church of Scotland, when it was decided to make a copy of 'Conversations in a small country' the official gift to the Queen’s representative, I felt it was an honour for all of us.

But I’m afraid the club is now in a pretty bad way. The members have been falling off their lofty perches at an alarming rate in recent years. Of the 23, only five are still above ground. The survivors could fit snugly into a black cab. Just don’t expect the chairman to drive.

The departure of the most recent resignee, Tam Dalyell, has a doleful significance. He was one of my particular favourites and I gave his
conversation prime slot in the book; I called the opening chapter 'Stormy Petrel'. It is quite some way in before we come to the first of the living, Tom Conti.

Every time another member resigns – 'passes' as we say these days – I have a brief, sentimental look at the book. But, after Tam, I decided to set myself a little test. How much could I remember of my encounters with the deceased without reference to the interviews? Here are the results:

Tam Dalyell: Extreme discomfort when challenged about his belief in God. Suddenly disappeared in the middle of the interview to retrieve from the Commons library an ancient parliamentary answer by Harold Macmillan.

Charles Kennedy: Congenial, funny, self-deprecating. Smoked constantly. We drank pints in a Commons bar. He informed me there were 19 such bars on the premises.

James Whyte (theologian): Magisterial deconstruction of Margaret Thatcher’s 'Sermon on the Mound' which he, as moderator that year, had
to chair. Gentle presence.

John Smith: Gossipy. Spoke briskly about mortality (he was recovering from his first near-fatal heart attack).

Jean Morris (chair of the Parole Board): Cast doubt on the sincerity of Jimmy Boyle’s rehabilitation. We disagreed about that.

Lord Home of the Hirsel: Tea in the House of Lords. Said he had a soft spot for Jimmy Maxton and the Red Clydesiders.

Tom Torrance (theologian): We talked at length about the after life. Compelling company.

Maurice Lindsay (poet): Sense of despair about the state of Scotland.

Sir William Kerr Fraser (senior civil servant): Spoke in a soft, measured monotone. Said he would like the words 'He simplified things a little' as his epitaph. It didn’t seem much to ask.

Mick McGahey: Whisky before noon in a bleak trade union club in Edinburgh. Coughed a lot.

Rikki Fulton: Spoke movingly of how comics can sense when an audience hates them and how he had been hated once. Unusually insightful.

Archbishop Thomas Winning: He thought the great day of judgement was
'probably a metaphor'. I remember feeling slightly disappointed.

Sir Iain Noble: Espoused with enormous passion the cause of an independent Scotland with a low tax regime.

George Younger: We met in his modest office in the HQ of the Royal Bank of Scotland (he’d recently taken over as chairman). It was above a branch, and George said he was often accosted by customers on the way out. He said he had decided to quit politics to do something different while there was still time. I thought: 'I should quit journalism to do something different'. So, of all the conversations, this one had the biggest personal impact. And when I did do something different – the Young Scotland Programme – it turned out that one of the first delegates, Fergus Younger, was George’s nephew.

Now that its days are so clearly numbered, I look back on my club with a certain nostalgic fondness. I have been chairman of the best sort of club – one that never actually met.