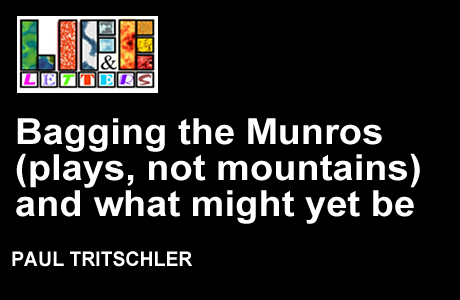 At last I bagged the Munros – the James plays, not the mountains. At around eight hours, three plays in one day proved quite a climb, and inevitably left some aches. But among them were the kind that linger in other ways: the kind that a sense of loss or enforced separation causes – that strangely compelling mix of anguish and longing that tends to emerge when we explore how we really feel, and who we really are.

The plays are not about the Scots, but the Scottish ruling class, and whilst there are moments lightheartedly conveyed, they paint anything but a glorious picture of monarchical rule in 15th century Scotland. The kings and the nobility had blood on their hands, as did the kings and nobility everywhere, and there is no glossing over grave errors, but the plays do outline the sorts of barriers the Scottish kings faced at that time and their achievements (such as the founding of Glasgow University) and their failures should be considered in the light of those constraints. Over the garden fence, after all, was an impossibly large and ruthless neighbour obsessed by ideas of limitless expansion.

But enemies were also close to home, and each king was undoubtedly aware that life for them might be shorter than most. Their hopes and dreams, both public and private, were circumscribed by those entirely rational fears, and in this regard the playwright, Rona Munro, provides some psychological insight, more Jungian than Freudian – an analytical standpoint evident in all three plays, but especially the second, the most abstract of the trilogy.

Refracted through various dramaturgical devices, she provides glimpses, as though from shards of mirrored glass, of the many selves of James II, and in so doing reveals the repressed, shadow aspect of the unlived life: we see wild and sudden flashbacks to horrors in childhood, to battlefield blood pools, to murder, madness, guilt and death. Munro performs this strange alchemy of turning 15th century statecraft and the hubris of megalomaniacs into an intimate look at personal turmoil and the human cost of shaping the psychogeography of today.

In some ways, then, the plays might motivate subjunctive realities – lending linguistic expression to ideas of what might have been, and what might yet be. At the level of the individual, benefits for psychological wellbeing are often derived from reflecting on one's community and its cultural history, and recent research by Wildschut and Sedikides suggests that these forms of nostalgia can lead to resilience and a positive concept of self and social identity. At the level of the group, however, the picture changes: other research suggests that collective nostalgia (and here we must include the desire for national independence), may strengthen autochthony – the belief in entitlement to a particular place because of primo-occupancy, of being there first. The dangers become most apparent when we cross over to an 'in-group' mentality, a position uniquely described in the US as 'nativist', and not easily distinguished at times from xenophobic.

A group of psychologists at Utrecht University in 2014, Smeekes, Verkuyten and Martinovic, found autochthonous beliefs in the Netherlands to be a powerful predictor of prejudice, particularly when primo-occupants, as an in-group, assert a proprietary claim over rights, status and resources to the exclusion of outgroups. 'Longing for the country to return to a socially homogenous past', they discovered, 'was strongly associated with opposition to Muslim expressive rights.' Because the latter are increasingly perceived as a threat to the national identity of many Western European countries, the authors argue that stronger endorsements of autochthony, resulting from feelings of national nostalgia, will intensify opposition to the rights and identity of Muslim immigrants.

Hopefully Scotland's bright new independent future, should it ever arise, will be characterised by a robust tolerance of others, and true grassroots self-governance. There being little chance of socialism through the Labour Party – despite the good intentions of Corbyn and a few colleagues, the party majority remains firmly within the post-Thatcherite New Labour mould – it is logical to build a socialist model wherever the objective conditions exist, and at the present juncture this seems most possible within an independent Scotland. Moreover, a bid for independence would have a more solid foundation if based on arguments for socialism rather than on autochthonous beliefs: arguments that can be empirically ascertained, as opposed to ones cited on the grounds of our complex, differentiated culture and history. There is no greater reason I can think of for seeking independence: a country free of foreign influence and their weapons of mass destruction, a country without kings, capitalists and corrupt careerists.

Whilst name-dropping is not my intention, on the day after the play – a damp, peopleless Sunday – I bumped into King James III. He was the one who, albeit through marriage, returned to Scotland the islands of Shetland and Orkney. True to form, the ever-acquisitive, narcissistic king emerged from Norwich Castle clutching a small hoard of clinking trinkets in a sack. He was played by Matthew Pidgeon in Rona Munro's trilogy, but on my approach to the castle I decided to hail him by his royal title. Unfortunately, that came out as 'Richard the Third', and standing by the plaque to the Norfolk rebels, I was reminded many were put to death by kings at that very spot for less. Luckily, he misplaced my stupidity for some sort of irony, and was happy to fall into conversation with a fellow Scot for a few minutes – a complete stranger on the street. I have always been fascinated by people who make a living pretending to be other people.

There were no end-of-the-journey trinket shops when I was a boy, and not much by way of treasure at the outset either. In those distant days the waxed floors of Glasgow's museums and galleries offered irresistible speed slides for children with well-worn soles; it was the main attraction (it is still tempting, but I always seem to be wearing the wrong shoes). I routinely slid past stuffed lions, stoats and spotted eggs, iron-minded missionaries, marbled misanthropists, and stone-faced colonial exploiters in bronze busts – empire-made men who would insist that we skip the fullness of childhood, get to work and put our backs into it, but instead we skipped school, went to the People's Palace and slid on our bums.

Were I to slide along that old route now, I would find history personified as 'great men' exploiting every aspect of nature for profit, the discoverers of lands with convenient pools of slave or cheap labour, and the despots dedicated to discipline and the 'civilising' of savages for the cause of empire – a euphemism for world domination. And although the vast majority of lower order Scots were among those subjugated populations, were I to flick through my old school books I would find they had no history that was not part of the story of England. We were led to believe that until the heroic days of smart kilts, bagpipes, India, and the stabilising influence of our masters, the culture of the Scots was more or less synonymous with savagery, summed up in family feuds, clan battles and barbarous turf wars.

A faint echo of those bitter outpourings was evident on the approach to the Scottish referendum, but also manifest in some of the reviews of the James plays. Division was the central theme. A parallel was drawn between the inability of the Scots in the 15th century to co-operate and concentrate on their duties, such as the running of the country (being obsessed with their own interests), and the Scots of today, where the determination to rule their own affairs was exceeded only by their determination to divide among themselves with ferocious passion and hostility. Clearly, talk of abandonment poses a threat to England's sense of birthright, which is perceived even in vague translations of the possibilities for independence, such as the plays.

In the short term, Scotland's departure might strengthen England's autochthonous beliefs. As suggested by recent psychological research, this road might lead to a heightening of national nostalgia resulting in prejudice against immigrants – it wouldn't take much – and perhaps at an ever-accelerating speed without Scottish influence as a counterweight. In the longer term, however, an independent socialist Scotland might be a role model for England: we might consider what small countries such as Iceland, Norway and Finland, respectively, have been able to achieve: bringing the fraudulent bankers to justice, radically improving the criminal justice system, challenging traditional educational methods to increase achievement and wellbeing – and this from a partial adoption of socialist principles.

From the available evidence, current and historical, there is little to offer by way of hope for those seeking socialism within the UK in the foreseeable future; the union today holds the greater prospect of war, austerity and mounting unhappiness. This is not to advocate a particular party line, merely to state that a socialist alternative is possible from the standpoint of independence, and that independence based on calls to a common history and culture, on ideas of Scottishness, carries intolerable risks.