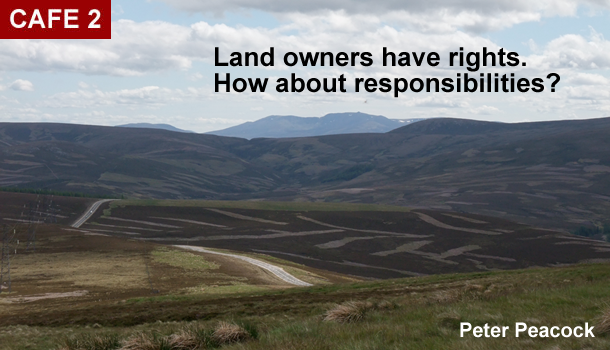 There has been much talk of land reform in recent years, but Scotland’s highly concentrated land ownership patterns persist. There are consequences from this ownership pattern in how power and wealth are distributed in our society.

New community rights to buy land kick-in over the next two years; this year the new Land Commission starts its work to keep land policy and law under continuous review; new regulations will be enacted to set up a register of those who control land while hiding their identity behind off-shore ownership vehicles; and the idea of land responsibilities will be embedded in a newly required Scottish government statement on 'Land Rights and Responsibilities'. The next chapter in Scotland’s land reform story is opening.

A great deal of the debate about Scotland’s land has revolved around land rights, those of owners, of communities, of tenants, and of citizens, for example, to roam freely on Scotland’s land. All of our land rights are set down in one bit of legislation or another, but little is formally captured about land responsibilities.

Of course, all land owners have clear duties to meet the terms of the law, for planning consents, not to discharge pollutants into the environment, and so on. But is that as far as responsibilities to society go, particularly in a context where so few own so much?

If land owners do have wider responsibilities, what are the expectations we have of those responsibilities? Might they be expressed as helping to achieve greater social justice, of combatting inequality, in helping the progressive realisation of peoples’ human rights to decent housing, to employment, to improved living standards and well-being? Might they further embrace a responsibility to manage land to mitigate the effects of, and reduce any contribution to, climate change?

It can surely be argued that with land come these sorts of responsibilities, that society would expect that; and the larger the land-holding, or the more strategic it may be in a town or urban context, the greater the responsibility. As yet, little of this is explicit. Even the very notion of more formal land responsibilities is novel in our national discourse about land, and there is very little internationally which suggests other societies have captured this in any detail.