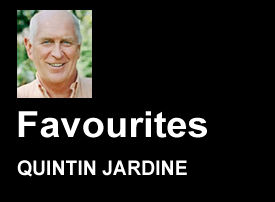 In each edition, a personal selection of things of value: we ask each contributor to nominate their favourite book, film, piece of music, work of art, restaurant or pub, and place. This week: novelist Quintin Jardine

Favourite book
I am of an age that lets me remember the Vietnam war as it evolved. I remember Muhammad Ali's refusal to take that step forward. I remember him being mocked on TV by none other than Sammy Davis Junior, who should have known way better. I remember Don McCullin's horrific photographic record, and I remember how it all ended, in humiliation and disgrace. All of that is encapsulated in a book called Dispatches, by Michael Herr. He was so desperate to write about the war that he blagged himself accreditation through Esquire Magazine, no less, but it took five years after the event before he could bring himself to write about it. If some of the action in its pages seems familiar, that's because it's referenced in the movie 'Apocalypse Now': watch it and listen to the narrator's voice at the beginning. That's Michael Herr. Over the years I've bought almost a dozen copies; I never lent it to anyone and had it returned, so eventually I stopped lending.

Favourite film
It was his sledge. When I grew up it was obligatory to revere 'Citizen Kane'. I tried but I never could, not quite. When I was 10 my dad took me to see 'Gone With the Wind'; all of it. The showing was on a baking-hot summer night in the oven they called the Gaumont in Motherwell, where you could hear the trains go by. There was an interval just after the burning of Atlanta; I have never seen so much ice-cream sold in such a short time.

Then as I grew up there was 'One Flew Over the Cuckoo's Nest', there was 'The Godfather', there was 'The French Connection' there was Poe's 'The Raven', with the three greats Price, Lorre and Karloff, there was 'Star Wars', there was everything Speilberg ever did, and there was 'Blazing Saddles'. The first time I ever saw that there was a second feature, an Australian movie called Alvin Purple. It was nothing less than soft porn; when the ABC management realised that, they pulled it, after a week, but for various reasons it was unforgettable. Around 30 years later, I was in Melbourne at a literary event. There was a dinner and they sat me next to a guy called Graeme Blundell, a writer and journalist. 'Used to be an actor', my host told me. 'He was in a movie called "Alvin Purple". He's been trying to live it down ever. since'. We sat and he introduced himself. 'Nice to meet you Graeme,' I said. 'Loved the movie.' I'll never forget the look on his face.

Favourite piece of music
There has been so much, and there always is. Today it was Gorecki's 3rd, the 'Symphony of Sorrowful Songs', not the sort of thing to set you up for a night on the batter. Yesterday, it was Beverley Knight, breaking her heart, and mine, with 'I Won't be Looking Back'. Day before that, in was Pink, with a belting track called 'F**king Perfect' – explicit lyrics. Long before that there was a night in the Usher Hall, when the great Stefan Grappelli duetted with Didier Lockwood, then called the equally great Aly Bain up on stage to join them. Further back, in the same venue, there was 'The Boys are Back in Town', and watching Phil Lynott drink himself to death. But five years after that, in St James Park, Newcastle, there was Bruce Springsteen and the E Street Band, pouring everything into Racing in the Street, with 25,000 people singing in harmony. That's what's stuck with me ever since, and always will.

Favourite work of art
Guernica. Did you get that? in case you didn't, Guernica. And if you're still in any doubt, Guernica. If you want one single reason to go to Madrid, forget the Prado, forget the Santiago Bernabeu Stadium tour. Head for the Museo Reina Sofia Gallery across the road from Atocha railway station, and stand before Picasso's masterpiece, for as long as they'll let you. I'm a bit of a collector, but that would never fit in my living room. One thing that does is a piece by the late, and wonderfully eccentric, Pat Douthwaite, (wish I'd met her) who took no care of her work at all. Coffee stains are a non-optonal extra on most of it. My piece doesn't have a name. It's a pig, with a ring in its ear; that's it. Yes, a pig. My grandson Rex loves it, and so do I.

Favourite restaurant or pub
Actually it's a hotel, The Mallard, in Gullane. Half my life has happened there...but don't all of you go at once, because we don't like the bar to get busy. When I'm not there, but in Spain, I'm choosy, but I will gravitate towards a bar called Driftwood, in Cala Montgo, run by my lovely friend Theresa Craven, and to Trattoria La Clota, in the marina in Riells, run by another friend, the boy Pallares, known to many as Crazy John.

Favourite place
Wherever my family is. I'm corny that way. My granddaughter Mia, was six yesterday; I was at her party in Vila-Robau and next Monday I'll be back with Rex. Lucky man all round.