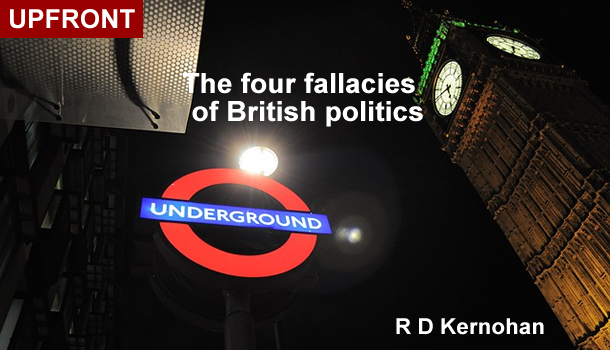 When the Victorian critic John Ruskin hit on the term 'pathetic fallacies' he was having a go at some poetic techniques he disliked. He didn’t mean, as modern usage might suggest, that they were despicable, but that their alleged infelicities reflected good intentions and exalted emotions.

It is in that sense that I suggest that our current politics, especially the Brexit arguments, are being distorted by four well-intentioned fallacies. They still linger, despite the flashes of realism among Theresa May’s pious hopes and in the better speeches in the Commons’ Article 50 second reading debate, in which so many contributors began with eloquence or insight and then subsided into platitudes or squeezed the sour grapes of their wrath.

The first fallacy is that we British have the effective choice of how hard or soft Brexit is going to be. That choice rests not only on own priorities but even more on the eventual ability of the other 27 to synthesize the claims and ambitions of different EU institutions and national inclinations. We would find it easier if the EU simply appointed Donald Tusk and Wolfgang Schäuble as plenipotentiaries but we shall have no such luck. For at the moment the European Union’s balance of power is uncertain and its balance of mind disturbed. Many of its leaders, like some people in Westminster, have allowed proper anxiety about the Trump presidency to become irrational hysteria. Others unreasonably resent a British decision to leave which, even if it was wrong, was our undoubted right. Some are understandably obsessed with the uncertainties of forthcoming Dutch, French, and German elections. Many fear that their voters might fancy a referendum of their own, on the euro or even the EU.

That is why even those of us who dislike the EU’s structures and especially its Commission – as many remain voters do – must be cast into realistic gloom by the dark forebodings of ex-ambassador Sir Ivan Rogers and by Theresa May’s frank and well-founded admission that no deal may be better than a bad one. It may not come to the worst, but that depends much more on the final mood of the 27 than on our own parliamentary heart-searchings.

The second fallacy, largely confined to those who (like me) voted remain, is that Britain’s troubled outlook in its relations with continental Europe is a direct and avoidable consequence of the vote to leave. The sad fact is that the British people have been in two or more minds about their relations with mainland Europe since the earliest days of 'the Six', through the time of the first referendum in 1975 (when the SNP and much of the Labour Party was for leaving), and into the aftermath of the Cameron referendum. Perhaps that is an inevitable result of our history, geographical situation, and the variety of cultural links we have with the rest of the English-speaking world and our nearer European neighbours.

It is an illusion to think that these tensions will not persist whatever the new form of our association (or dissociation) but it is an even greater illusion to think that if Britain had voted remain these tensions would not have become more acute or would have been no more than a festering quarrel among Tory factions. While it is true that large numbers of Europeans resent aspects the EU, it is even more significant that the still dominant political class in continental Europe – Schulz and Macron as well as Merkel and Juncker – regard 'ever-closer union' as more than a rhetorical flourish. The European resentment over our leave vote is mingled with a quieter, deeper, older resentment that we have consistently dragged our feet over 'ever-closer' initiatives, opted out of Schengen and the euro, and fought to retain Margaret Thatcher’s rebate. There was European trouble whichever way the referendum had gone.

The next fallacy, muted in the Common debate but much loved by columnists, media panellists, and letter-writers to editors, is that the European Union should be credited with keeping the world’s peace – or at least from keeping its wars away from Western Europe. A sounder historical judgement would be that European institutions were benign symptoms of reconciliation, repentance, and exhaustion. They emerged from a new mood but did not create it. If any institution is to be especially credited with harmony in the West and stability in its relations with rest of the world it should be Nato, now endangered by President Trump’s mixed messages and the virulence of a European hostility towards him which sometimes extends to hostility to the Americans who elected him, largely in spite of his demeanour and not because of it.

It was startling to hear one of the otherwise reasoned speeches in the Article 50 debate – Ben Bradshaw’s I think – claim that Brexit would cut us off from our 'closest friends' when we were faced with 'that president'. But Greeks, Slovaks, and even Bruxellois are not our closest friends, agreeable though they are. In or out of the EU, and regardless of who has tenancy of the White House, our closest friends are those in the USA and the Commonwealth with whom we share a longer history and common language.

The final fallacy is obviously not one which is universally held but which is widespread both in Scotland and the rest of Britain, especially among otherwise sensible persons of Tory or Liberal inclinations, as well as in the SNP and UKIP. It is that the parlous and fractious state of the Labour party, and the alienation of so many of its 'natural' supporters, is one of the brighter patches in Britain’s cloud-covered landscape. There are extenuating circumstances for their error – an anguished awakening after the extended seduction by Blair, the choice of the wrong Miliband, and the cantankerously ineffective performances of Jeremy Corbyn. But the present weakness of the Labour party is one of Britain’s national weaknesses and a particular threat to the emotional balance and future prospects of Scotland. It hinders effective but constructive criticism of the government’s handling of Brexit and it makes it more difficult to impose a restraining order on Nicola Sturgeon when she tries to contrive a replay of the 2014 referendum on Scottish secession from the UK.

It may seem an odd view to come from a Tory (and one more at home with Mrs May than with Cameron) but I suggest that, insofar as it reflected greater enthusiasm and involvement, the upsurge of support for Corbyn in the two Labour leadership elections ought to have been good for British and Scottish politics. There are attitudes and currents of opinion in contemporary Britain which need expression through a refreshed party of the Left able to blend naive idealism with practical realism. Besides, socialism can always be undone and often (though not in Corbyn’s case) subsides with age and experience. The potential damage that could be done by the SNP and their Green fellow-travellers would be far harder to repair.

But to be effective such an opposition needs almost anyone but Corbyn to lead it, even though a new leader from the sensible centre would have to lean a little leftwards in style and policy. Keir Starmer could grow into the job, Hilary Benn might be recalled, and Yvette Cooper (and even her dancing man after the right by-election) are surely available. An early deliverance seems improbable but it is desperately needed if Britain is to enter the Brexit negotiations in the right mood and Scotland is to have a more effective resistance to the SNP than Ruth Davidson can provide on her own.