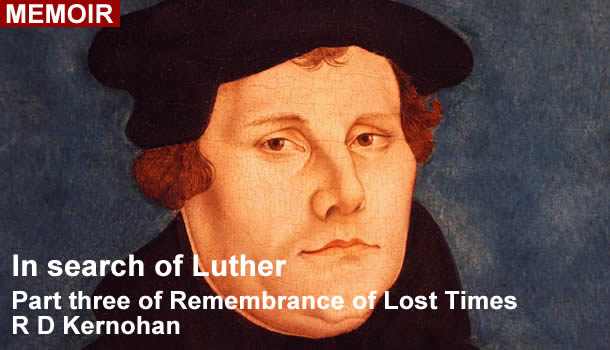 Many of us were taught in troubled times to revere him as a great reformer, even if he was a German. Calvin thought he could be a pain but should be forgiven and richly honoured for taking his stand and affirming the truth. Spanish and Italian mothers used to frighten their children with his name but modern Roman Catholic theologians lament that he was allowed to go astray and they concede that he was maybe often right.

But to Germans Martin Luther is two other things: a national hero and an excuse for a national celebration every few decades. There are birth and death centenaries and also dramatic events in his life to be commemorated, not only with innumerable academic or theological colloquies and strong doses of highbrow media coverage but with some clinking of glasses. The Protestants are understandably involved, the lapsed Protestants find something to cling to. The Catholics are caught between deploring and respecting him, and even the most dogmatic secularists recognise that he shaped both European history and the German language.

This year's festivities mark the 95 challenging theses which were attached to church doors in Wittenberg in 1517 and which, with some over-simplification, can be deemed the overture to the Reformation. I'm probably too old to go, and I don't think the BBC would pay my expenses as they did for the last great Luther festival in 1983, the 500th anniversary of his birth.

The licence-payers had then to pay twice over, for my modest documentary for Radio 3 became entangled in the frustrations of a divided Germany, with Luther's home ground around Eisleben, Erfurt and Wittenberg in the grip of a communist East German regime obsessed with 'security' and bureaucracy as well as Marxist ideology.

Covering the main West German festival in Worms, where Luther took his famous stand for 'conscience captive to the word of God', was no problem. All the professors from Flensburg to Freiburg seemed to have gathered to discuss whether Luther was ahead of his time, or a late medieval man, or even (I find the baffling phrase in my notes) 'the last real Catholic'. There were sonorous eulogies in an auditorium, including those from a team of Roman Catholic prelates who later sat in pious stolidity when the rest of us fanned out to the points in the main Protestant church where the Lord's Supper was being shared. It all yielded good, easily-handled material, especially when I later met a priest who had joined in the communion.

But we also wanted to get the view from East Germany. The obvious plan was that my producer and I should get in our hired car, heed an earlier police warning about driving too slowly on the autobahn, take in a great exhibition of Lutheriana in the Nuremberg national museum, head for a border check-point, and tap the great store of Luther scholarship reputedly accumulated in Leipzig. Fond hopes. The visas hadn't come through.

When, three weeks later, we were told we could collect them in East Berlin it meant not only a new trip but a switch from the balmy Rhineland autumn to the early onset of a mid-European winter. There was slush as we submitted to the search-rituals at Checkpoint Charlie on the way to our compulsory five-star hotel by the Spree. Then the hard frost set in and it turned out the visas (needed to cross the city border into the old Soviet zone) were not quite ready. Maybe it was just slow-motion bureaucracy, maybe dislike of the BBC, maybe a minor symptom of the policy which had bullied a reluctant East German church into splitting with the West.

The hotel offered almost every comfort except Western newspapers, but payable only in foreign currency and thus barred to local people. Outside East Berlin was bleak, though it yielded a good interview with a woman church leader who confessed it had taken her quite a long time to learn to love Luther and was all for modern Bible translations. For a few days I made the best of the galleries and museums, including one on the Unter den Linden where a Luther exhibition was thriving while the neighbouring galleries of Marxist history were deserted.

I also ventured on some chilly wandering round the drab city and was rewarded with a practical assurance that an old Prussian love of order survived under communism. As I stood awaiting a city S-Bahn train two middle-aged ladies approached me. Did I know that my overcoat was not buttoned properly – I think 'falsch geknöpft' was the expression – with the top button in the second-top buttonhole? I thanked them, adjusted my dress, and felt assured that even if our trip to Leipzig was to be heavily supervised by a 'liaison officer' it would be well ordered.

It wasn't. Our appointed minder, who eventually produced the visas, was not very orderly and his powers of liaison were limited by lack of any really serviceable language other than German and his school Russian. However he had come from his latest liaison minding the Scottish broadcasters covering a football international at Halle (we lost 2-1, 16 November 1983) and over lunch was anxious to explore the ideological implications of a rivalry his previous clients had mentioned between teams called Rangers and Celtic.

The next day he was to escort and guide us on our drive to Leipzig but didn't turn up. When we phoned his ministry we learned he had taken the train instead, leaving a message at our hotel which never reached us. We were to catch up with him at the Karl Marx University. We set off in pursuit, on a frosty autobahn and then over slippery tram lines, assured that we couldn't miss the university (since renamed) thanks to its vast tower block overshadowing the old city.

But at least our interviews with the university's foremost authorities on Luther had been confirmed. They were to introduce us to the complexities as well as the absurdities of East Germany, for one professor was a Frankfurt-born Marxist and party member, converted as a Russian prisoner-of-war, and the other a Lutheran minister. Both lived modestly, one in what resembled a better-class council house, the other in Leipzig's equivalent of a Glasgow tenement with a tiled 'wally close'.

Max Steinmetz, a member of the East German state Luther commemoration committee, was presumably no believer but seemed an admirer of Luther and thought his influence still 'under the skin' of the Germans in the territories that became the DDR. The evolution of his own scholarly views seemed in parallel with the much cruder course of official East German attitudes to Luther, for he was also an authority on Thomas Müntzer, the more radical reformer who took the opposite side in the bloody peasant revolts of the 1520s. In the early DDR years Müntzer was glorified and Luther denigrated. By 1983 the regime found it expedient to claim Luther as a local boy made good, and its propaganda followed where even Marxist scholars like Steinmetz led.

The enthusiasm of Helmar Junghans for Luther was more predictable – more predictable than the way the regime had allowed his fellow-scholars to confer the title of professor on him, even if he was to wait till communism collapsed to get full status and powers. He came across as conservative in a non-political way, both in his scholarship and in his devotion to Luther's Bible translation, which has the same standing and faces the same challenges as the authorised version in English. He seemed to accept St Paul's assurance that all things work together for good to them who love God. In that mood he found the DDR's new enthusiasm for Luther both welcome and 'astounding'.

But one thing puzzled me about Junghans. I knew he had been allowed out (perhaps without his family) to lecture in the United States at Yale and elsewhere and I've since learned that he had already an honorary doctorate from a university in Indiana. But he professed to have no English and the conversation as well as the interview had to be in German, which perhaps meant that his answers made more sense than some of my questions. Only afterwards was the puzzle's solution clear to me. Our almost monoglot minder had to know what was going on and being said. Maybe his report languishes somewhere in the files of the Stasi.

Before leaving I encountered another of East Germany's many little complexities. The flat was solid, roomy and comfortable, but I was not, for in our belated pursuit of our minder I had not only missed lunch but had no suitable pause to go to the lavatory. I politely asked for directions and the professor got one of his children to fetch me the key. The facilities were on the stairway half-landing between floors, as in many of the Glasgow tenements of my youth – though not in west-end closes where professors lived. My guess is that Leipzig housing under 'socialism' had been municipalised and struggled hopelessly with maintenance costs, never mind improvements.

The installation of indoor professorial bathrooms will have been one the many changes completed in Germany between the 1983 Luther commemoration and the 2017 one. Others are more important.

The most obvious change is that there is one Germany, even if the 40 years of division have left their mark. If 200,000 people gather (as is expected) for one of the celebrations on the meadows between Wittenberg and the Elbe the majority will be from the old West. But there will not be quite as many from the East as might have been expected after the 1989 church-centred demonstrations in Leipzig, under the shadow of that university tower-block, which fatally weakened the communist grip. Then the church was the one institution not controlled by the state and many East Germans who had ceased to adhere to it found themselves again associated with it.

But co-operation and good will were not enough either to undo the organised secularisation of the communists (and their Nazi predecessors) or reverse the drift from faith and practice evident across Western Europe. And in the rest of Germany, even though it accepted a daughter of an East German manse as chancellor, that trend has been emphasised, perhaps exaggerated, by the massive opt-out of nominal Christians who had little involvement beyond paying church tax.

They will probably still find it easy to treat Luther as the national Titan, to be (according to whichever church they have lapsed from) admired or grudgingly respected. It will be more difficult for the national Luther celebrations to adjust to other changes in German society, evident even before the pastor's daughter opened the doors to large numbers of immigrants, many of them Syrian refugees and many from somewhere else.

Luther's truest admirers have always been embarrassed by some of what he wrote about Jews, though his 'anti-Semitism' was theological and not racial, seeking conversion and not destruction. He also had a lot to say about Islam and the Turkish jihadism of his day which must be politically incorrect, but not necessarily unpopular, in contemporary Germany.

There may also be grumbles from some of the feminists who think Luther too patriarchal. But even they will have a consolation. They can also celebrate Katharina von Bora, the nun who became his wife, bore his children and his idiosyncrasies, managed his practical affairs, and shared his domestic happiness.