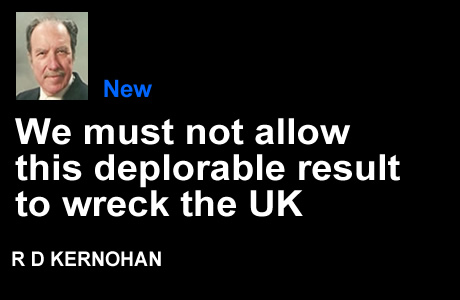 I cannot grin but I think I can bear it, and so should all of us who voted with our heads but could not give our whole hearts to what the European Union has become. We shall have to take some economic damage without, at least for some time, being able to take any of the advantage that a minority of economists and entrepreneurs think they see in British independence.

That is manageable. My greater anxieties are about the course of Scottish politics, the inflammation of old scars and sores in Ireland, and the risk that the Conservative Party, which ought to be the stabilising factor in British politics, will fall into the hands of an unstable and unpredictable leadership.

But we should take time to reflect on why Remain lost as well as to make the best use of the time demanded by the formal procedures of disengagement. The Cameron-Osborne partnership had to exaggerate the undoubted economic dangers of secession because the prime minister, even with good will from the more benign of EU leaders, had failed to change the mind-set of those planning the Union’s course and controlling its institutions. The Leave campaign made grotesque claims about a Turkish invasion and a European army but it was rattling skeletons still stored away in Brussels cupboards.

The prime minister was also personably vulnerable, given his past commitments, once the Leavers put their emphasis on immigration. Scotland has probably benefitted from a modest pace of immigration but large areas of England have been dramatically affected by changes that their people never envisaged or voted for and other parts fear the same thing may happen to them. Much of the change had little to do with free movement within Europe, but Cameron had made promises which he couldn’t keep. The protest is as understandable as it is unfortunate.

Now the Conservative Party risks exchanging an able but arrogant pragmatist for a skilful populist and opportunist. But it should make cautious and careful use of the time before it actually elects its new leader, whoever he or she is to be.

So too should Scotland take the much longer time for reflection while the formalities of EU secession are completed. Perhaps the surprising thing about the Scottish results is that so large a minority voted, for whatever reasons, against a solid front of their party leaders and the advice of those of us who thought we knew best.

I doubt if the Scottish people have any stomach for another rancorous and divisive referendum over secession from the United Kingdom and whether, once the new pattern of British relations with Europe is settled, they would vote very differently from the last time when they were told they were settling the matter for the foreseeable future. The economic, historical, emotional, and social reasons for the maintenance of the United Kingdom, always immeasurably stronger than those for a federal Europe, are in no whit diminished by the narrow British vote for Leave. Some of the arguments against Scottish secession from the UK may become even stronger and some of the anxieties that weighed so powerfully in the 2014 referendum – so slightingly dismissed as 'Project Fear' – will be even more justified.

The result of the EU a referendum is deplorable but things will go from bad to worse if we allow it to wreck the United Kingdom. Whether it wrecks the Tory Party (or Labour, for that matter) is in comparison a matter of trivial importance.