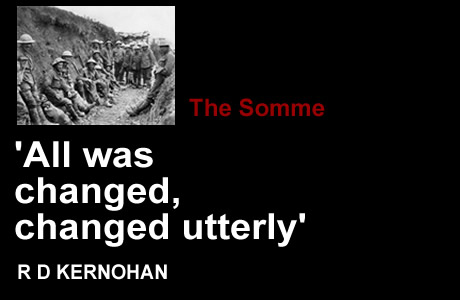 No-one can truly celebrate the centenary of the series of battles we call 'the Somme' but the commemoration is worthwhile, and not only on this island. For Britain (and part of Ireland) it is an occasion for courage, emotion, and agony to be recollected in relative tranquillity and for folk-memory to be refreshed and revised by historical perspective and research. But for all of Ireland it is an occasion for the rediscovery of suppressed or distorted history and the exploration of a more complex identity than either republican nationalism or ultra-unionism will readily admit.

In Northern Ireland the Somme has been even more obviously remembered than in the rest of the United Kingdom – very obviously sometimes on banners and even murals. Every Protestant and unionist community in Ulster felt the shock and loss that in Britain we associate mainly with Northern English 'pals’ battalions' or such similar Scottish formations as the Glasgow Chamber of Commerce battalion. For the 36th (Ulster) division of Kitchener’s 'New Army' was formed from the Ulster Volunteers raised to resist what was variously described as Dublin rule, home rule, and Rome rule. On the ghastly opening day of the Somme, the division had been one of the few to make significant progress, capturing the formidable German 'Schwaben Redoubt' at Thiepval before being forced back when the flanking attacks failed. The cost of the higher command’s miscalculations was 5,000 Ulster casualties, including nearly 2,000 dead.

But the Ulster division was only one part of a greater Irish contribution to the British army, much of it later forgotten in Britain and ignored, concealed, or denigrated after Irish nationalism was captured by Sinn Fein and Irish history was reshaped by ugly myths of the 'terrible beauty' of the Easter Rising. Yet for every rebel on the Dublin streets more than 100 volunteer Irish soldiers were involved in the terrible and bloody squalor of trench warfare; and a very high proportion of them, from all parts of Ireland, suffered on the Somme.

More than 200,000 Irishmen from across the island served in the British forces, with many thousands more from the diaspora. Those of them who returned to what became the Free State and later the Republic went their different and often bewildered and embittered ways. Some went over to Sinn Fein during the dirty war of murders and Black and Tan reprisals, though later finding themselves on opposite sides in the post-Treaty civil war, in which about half the new Free State army had previous British service. Those with a strongly unionist (and usually Protestant) background who stayed in the new Ireland made the best of their situation, in some ways more at ease with the disappointments of history than the far more numerous nationalist ex-soldiers. This part of Roman Catholic Ireland often found itself suspect and excluded from a full share in the effusive assertion of independent nationality, and became understandably aggrieved at its treatment both by the old régime and the new one.

But there is a new and happier mood in the centenary events for these unhappy times, and only relatively faint echoes of the anti-British zealotry which once even harassed Armistice Day commemorations in the Republic and its predecessor, the Irish Free State (and had a murderous late echo in the IRA bombing at Enniskillen in 1987). The inevitable Easter Rising commemorations this year were as conciliatory as the occasion allowed, with a background of honest historical reappraisal as well as rhetorical flourishes in the tradition of W B Yeats, a great poet whose political intelligence was on a par with that of Hugh MacDiarmid or Ezra Pound.

The same reappraisal is evident in the readiness, even eagerness, of Dublin’s political leaders to share in the Somme commemorations, the rather less effusive gestures of Ulster Republicans, and in the admirable summaries of the Irish involvement in the first world war available on Dublin government websites. And, despite the Easter rebels’ invocation of their 'gallant allies in Europe' – rather played down in the commemorations – and Roger Casement’s unsuccessful attempts to suborn Irish prisoners-of-war, that involvement was overwhelmingly in support of the British and allied cause.

There was a substantial Irish share in both the officer corps and the rank and file of the old regular army. Had Kipling bothered to identify 'the colonel’s lady', she might have been as Irish as Judy O’Grady and not just one of the 'sisters under their skins', though she probably went to a different church. But in addition to the Ulster one there were two other Irish divisions in in Kitchener’s New Army. The 10th had no strong regional or political emphasis and spent the war around the Mediterranean, in Gallipoli, Salonika, and Palestine, though many of its depleted units were brought back to France for the 1918 campaign.

The 16th, however, was almost as Nationalist as the 36th was Unionist and was to share its agony on the Somme, where it took 4,300 casualties in the later stages of the battle, and later when the two much diluted divisions fought at Messines and Third Ypres. Probably about 80,000 Irishmen, all of them volunteers, were involved in the long series of battles we call 'the Somme' and perhaps 25,000 were on the casualty lists. The figures are approximate and debatable. The mark on Irish history is indelible.

The core of the 16th included those of the Irish Volunteers (the Green equivalent of the Orange UVF) who had responded to Kitchener’s call as interpreted and seconded by Irish Nationalist leader John Redmond, who believed that Irish commitment to the war was justified both by the cause and by the hope that comradeship in arms would ease a peaceful passage to home rule in an undivided Ireland under the Crown. Redmond was not helped by the clumsiness and suspicion with which the War Office handled attempts to emphasise the Irish patriotic ethos of the division and which left a legacy (still evident today) of resentment. Even more important, he underestimated both the depth of Ulster Protestant distrust and the potential ferocity of a nationalism which he led in parliament but did not typify either in temperament or outlook; but that should not detract from a reputation for enlightened patriotism which has slowly been restored in an Ireland quite different from the one he envisaged.

About 10% of all Irishmen who served in the war had been nationalist Irish Volunteers and tens of thousands of the rest had varying degrees and styles of nationalist inclinations. Among them were several of Redmond’s Irish Parliamentary Party colleagues, including his brother Willie, killed at Messines (where today there is an all-Irish 'peace park' and memorial) and Tom Kettle, a former Nationalist MP for East Tyrone, killed on the Somme.

But by the time John Redmond died early in 1918 Ireland was on the way to being its old self as 'the most distressful country', with Sinn Fein in the ascendant (helped by the Asquith government and military command’s mishandling of the aftermath of the Easter rising) and smitten by the frustration and weariness which years of war and fearful bloodshed had brought and which was creating revolutionary moods across Europe as empires crumbled.

Every army felt the strain, sometimes shown in near-mutinous discontent, sometimes in alienation from civilian populations which had little notion of what trench warfare was like. Given Ireland’s distinctive and often unhappy history, it was inevitable that the discontent and alienation should take distinctively Irish forms. Irish soldiers, not just the Ulstermen, doggedly did their duty and saw the war through, but in most of Ireland the mood that the Redmonds has once embodied was gone and all, as Yeats was later to say, was 'changed, changed utterly'.

Yet political revolutions, whether in Russia, China, France, or Ireland do not wipe out earlier facts of history and natural affinities. The Irish share in the 1914-18 war and the substantial volunteer involvement in the Hitler one, in face of the de Valera government’s neutrality, are part of a much more complex Irish relationship with Britain (and in imperial history) than nationalist ideology usually admits. So too is the continuing role of Irish people from across the border, as well as from Northern Ireland, in today’s British forces.

The Somme centenary is a painful and ugly occasion for commemoration, despite the courage and rather naïve idealism of the citizen-soldiers that it recalls, but it deserves to be marked not just throughout the United Kingdom but across the whole island of Ireland.