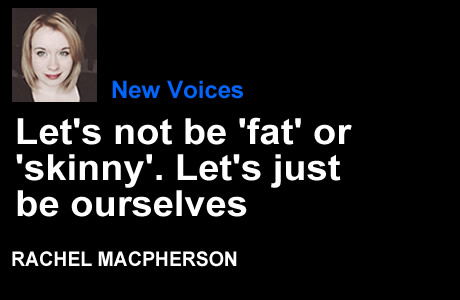 Skinny. Stick thin. Bag of bones. Straight up and down. Beanpole. It must be great to be skinny. All the guys must chase after you, you must be as sexy as hell, and of course you look like the kind of woman all other women must want to be. You don’t have to deal with 'body shaming’, not being able to buy certain clothes because you’ve been told they’re not for your size, insecurities over what you wear every single damn day, or with feeling undesirable because you don’t look like the models on tv. It’s easier to be skinny, right?

Just recently, Facebook was criticised for banning an advert featuring the plus-sized model Tess Holliday in lingerie because it depicted 'body parts in an undesirable manner’. The photo was supposed to be used as an advert for Cherchez La Femme’s Body Positivity campaign, but instead has become the poster for Body Positivity everywhere, due to the outcry against its axing from Facebook by millions of women around the world.

These kinds of adverts and images are usually celebrated as showing the diversity of women’s body image and for promoting the idea that all women should be happy in their own skin. Models like Tess Holliday are beautiful and empowering because they show women who are confident in themselves. They are standing up to the haters and the online trolls and proving that all body shapes should be accepted.

On the other side of the tracks, adverts promoting 'unhealthy’ body images, such as The Protein World 'beach body ready’ ad, which depicts a skinny model standing in her bikini, will be banned across the Transport for London network from July. Introduced by new London mayor Sadiq Khan, the policy was advocated as a move that would ensure that these kind of toxic images of women in their bikinis were not promoted to the detriment of young people, young women in particular, and how they view themselves.

In the same month, an advert with a bigger woman in her underwear is promoted as Body Positivity while an advert of a skinny woman in a bikini is banned for demeaning people and making them ashamed of their bodies. Bigger women shouldn’t be told not to model lingerie because real women have curves. Being a plus-sized model is better than being a bag of bones or promoting 'unhealthy or unrealistic’ body standards.

Body Positivity campaigns have made headway in recent years, but the greater acceptance of curvier, bigger women in the media and the move away from the Hollywood body standard that has been idolised by so many women and men has undoubtedly had a negative impact on how we deal with body image. In 2014, over 5m negative tweets were posted about beauty and body image and four out of five of them were posted from one woman to another. Women rally to support those who face the disgusting comments made by 'fat shamers’ and then in the same breath, slam each other for being too skinny and for not being womanly enough.

A skinny woman speaking out against 'skinny shaming’ is seen as someone who clearly doesn’t understand the level of abuse and hating bigger women face on a daily basis. The problems skinny women may face aren’t a serious issue. Has this become a norm of female life? To tear down other women because they look different from you? It’s almost as if one extreme has been pitted against the other. You’re either in the fat camp or skinny camp, there is no longer any middle ground.

Why is a bigger woman who combats 'fat shaming’ seen to be a symbol of confidence and empowerment, yet if you’re thin, skinny, slim, you’re perpetuating unrealistic beauty standards for women? Why do we have to be one or the other? Yes, there has been great progress in terms of representation of the female body in the media, but you can’t promote Body Positivity and have a negative undercurrent towards what was already there. Plus sizes are great, but they don’t make sizes 6 or 8 or 10 wrong.

No matter which way you look at it, making snide or nasty comments about someone else’s figure is body shaming. Be you fat or thin, tall or short, people saying mean things will always have the same impact. You have no idea what effect your words could have on someone else. They could be meaningless to you, but for someone who suffers from anorexia, bulimia, IBS, mental ill health, side-effects from a prescribed drug, or who is simply just naturally that way, the impact could be damaging both physically and mentally.

How can we expect others to treat us with respect if we can’t even treat ourselves with respect? Body image has become toxic for our health. In our attempt to battle against one extreme, we’ve become a victim of the other. Obesity rates have skyrocketed over the last few decades. They have tripled in men and more than doubled amongst women, while rates of those who are underweight have dropped from 14% to 9% in men and 15% to 10% in women. In our society, there’s enormous pressure to look a certain way, meet certain standards and expectations. If you don’t, then clearly you aren’t pretty enough, handsome enough, or good enough. And for many it’s just that simple. This idea of being perfect messes with your head and your health, and women aren’t the only ones affected.

Body image is diverse and wide ranging and to think that it’s a debate that solely affects women is seriously naïve. Why is it okay to talk about women’s insecurities over their bodies, but not men’s? You don’t hear much about campaigns to ban adverts of topless and toned male models or of movements promoting the different shapes and sizes of men. Their body image standards are just as unrealistic as women’s are. Men have to be tall, strong, buff, toned, good looking, active and charming, simultaneously. No woman wants a short man, who is lazy or fat or too skinny or baby-faced.

The main focus of many Body Positivity campaigns has been to challenge beauty standards for women and to garner a greater societal acceptance of different female shapes and sizes. But it’s flipped from one extreme to the other and thinner women and men have been left in the dust. So, it’s not okay to call a woman fat, but it is okay to claim that being bigger and having curves is more womanly than being 'stick thin’ or to mock a man because he’s short. It’s not okay to tell a bigger woman she should eat a salad, but it is okay to tell a skinny woman that she should eat a cake. It’s okay for pop singers to sing about 'bringing booty back’ and 'Fuck them skinny bitches’, but not okay for people to say the reverse. Is it okay? What people have got to realise is that it isn’t. There is no such thing as the perfect body. It simply does not exist.

Regardless of weight, sex, race, age or height, everyone has the right to feel insecure about their bodies and about how they look. It isn’t solely reserved for women who are overweight or underweight or even just for women. Body Positivity will not come from tearing others down or from body shaming. It’ll come from learning to accept yourself for who you are, and loving your natural self.

Next edition of the Scottish Review: 1 June 2016
Sign up free