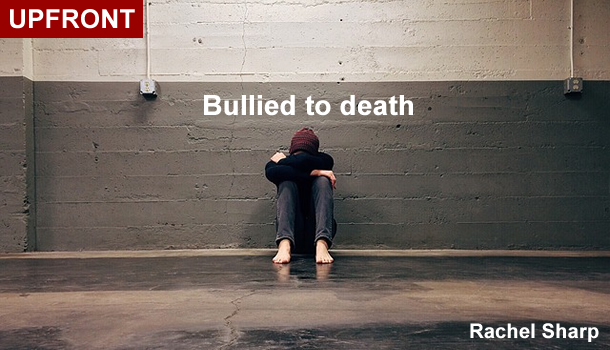 Chloe Orr was 15 when she committed suicide. She left behind a lock of her hair for her mother and a three-page suicide note detailing the torment she endured at school after coming out as gay. She planned on becoming a mental health nurse.

Dominic Crouch was also 15 when he threw himself from a six-storey block of flats. He had only recently returned from a four-day school trip where he was rumoured to have kissed another boy during a game of spin-the-bottle. His father, Roger, hanged himself 18 months later.

Ayden Keenan-Olson was found dead by his father after overdosing on prescription drugs. He left two suicide notes outlining the homophobic abuse he experienced at school. He was 14.

Like thousands of other young people across the UK, Chloe, Dominic and Ayden were victims of homophobic bullying at school. An alarming number of LGBT pupils across the UK identify education as the environment where they face the most discrimination. According to Time for Inclusive Education (TIE), nine out of 10 LGBT students experience homophobia, biphobia or transphobia at school, and over a quarter of them will attempt suicide as a result.

The BBC has decried 'high rates' of homophobic bullying in schools, the Telegraph has remarked on a 'plague' of homophobia, and STV has lamented that LGBT pupils are being failed by the system. Unfortunately this isn’t hot news. The education system has always failed LGBT pupils, but it’s only recently that equality has come into fashion.

When Margaret Thatcher’s government introduced Section 28 of the 1988 Local Government Act, which stated that councils should not 'intentionally promote homosexuality' in its schools or areas of work, it heralded the arrival of a new age of discrimination in the UK. This law turned schools and communities into arenas of discrimination and created a culture of silence and ignorance that prevails today.

Despite having been repealed over a decade ago, the law has left in its wake a miasma of confusion and a generation of teachers who have no idea how to incorporate the LGBT community into their schools. The current Scottish education curriculum allows schools to opt out of progressive teaching programmes that discuss topics relating to the LGBT community. Sexual education, including information about safe sex, focusses on heterosexual relationships, and Stonewall has reported that a staggering 75% of primary and 44% of secondary school staff in Scotland say they either aren’t allowed, or aren’t sure if they are allowed, to teach about LGBT issues in their school.

According to Stonewall Scotland, fewer than one in four primary school staff in Scotland say their school has a policy that explicitly addresses homophobic bullying. With this in mind, the question isn’t 'why is homophobic bullying such a problem', but 'why is so little being done to address the problem?'

The silence is deafening and the need for education is urgent. Jordan Daly, on behalf of TIE, has urged the Scottish government to make the teaching of LGBTI+ issues and topics statutory in all schools. The campaign aims to introduce a diverse and fully inclusive education programme that addresses such matters in a positive and progressive manner. These are necessary steps Scottish schools must take in order to instil children with knowledge, tolerance and compassion.

When conducting its survey, Stonewall interviewed a science teacher from a Scottish Catholic secondary school, who reported that she was often questioned by pupils about same-sex relationships, and even asked 'how people become gay'. This fundamental misunderstanding of how homosexuality is experienced is disturbing. The idea that it is somehow a conscious choice is a misguided interpretation that can only be properly addressed through education.

Being homosexual, bisexual or transexual is not the reason young people get bullied. Young people are bullied when they appear to be different. Unfortunately, LGBT topics are so untouched, so unaccepted in our learning environments, that when young people begin to show signs of identification with the LGBT community, they are ostracised from 'normalhood'. They become different; they become a target.

Jeremy Corbyn’s pledge to put LGBT history on school curriculums is just one of the ways in which schools can incorporate these issues into the daily discourses of young people. When we begin the process of discussing topics openly and meaningfully we begin the process of normalising them. Perhaps over time, through education, a young person’s sexual orientation may become as interesting to their peers as their star sign.

The absence of tolerant learning environments is felt by LGBT students as strongly as the absence of Chloe, Dominic and Ayden is felt by their families. Schools and communities must exercise their right to discuss homosexuality by implementing explicit anti-bullying policies and educating staff on how to deal with discriminatory language. Young people should not be shamed into silence for fear of ridicule.

Every child bullied is a child too many. Let’s not wait for more names to be added to the list of lives lost before we choose to take action. Let’s end the culture of silence and give every young person the right they deserve to a safe education.