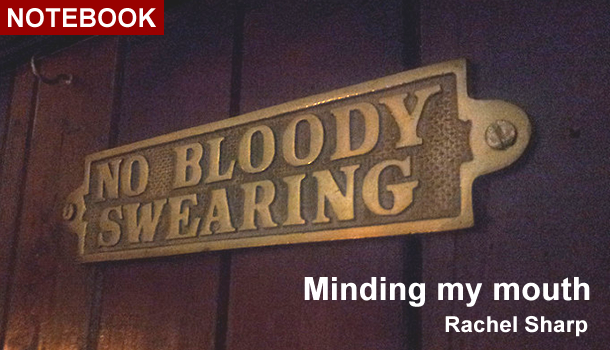 I was in the car with my parents recently listening to Clyde 1 when a caller swore live on air. 'Language!' my mother exclaimed, but the show’s presenters barely noticed. Eventually they registered what had happened and abruptly apologised to listeners who may have been offended.

'Oh come on', I said to myself. It wasn’t as if he’d sworn at anyone directly or even aggressively. The 's' word slipped so effortlessly into the conversation it was as though it belonged there.

According to James V O’Connor in 'Cuss Control', 'people who swear often tend to be disagreeable, critical, cynical, angry, argumentative, and unhappy complainers'. Not only is there no empirical evidence to support this claim, but as someone who swears on a daily basis – predominantly at my computer screen – I find O’Connor’s statement just as offensive as if he’d called people who swear nasty little shits. Both statements mean the same thing, so why not cut out the superfluous adjectives and get to the point?

Some argue that swearing is inherently aggressive. But when you begin to dissect some of today’s most popular profanities, there isn’t much in their etymology to denote aggression. Take, for instance, the Clyde 1 caller’s favourite word – 'shit'. Deriving from the Old English word scitte, it literally means 'diarrhoea', and was originally used without any vulgar connotations.

'Fuck', which has a slightly more violent inception, is Indo-European in root and means 'strike'. Only in the last few hundred years has society assigned vulgar and hostile undertones to the word. Even the most appalling word in the English language, the 'c' word, was originally just a general descriptive term for the vagina. Yet language is constantly evolving with the peoples who employ it, and is therefore subject to every generation’s interpretation of social acceptability. Those who are offended by swear words are so because they were raised to; there is no etymological justification for this response.

Surely any word can be employed to project aggression, not just swear words? A couple of months ago I had an argument in the park with a woman whose dog attacked my own. Neither of us swore, but the exchange was no less heated, ending only when she dismissed me as 'a silly wee cow'. Taken in isolation, none of these words could cause offence, but their combination incensed me as much as, if not more than, any swear word.

Some might argue that swearing is a sign of limited vocabulary or a lack of intelligence, but when I arrived at university we read books that employed profanity like it was going out of fashion. Not because their authors were uneducated – it was simply a means by which they expressed their ideas more emphatically. In my first university exam, I was presented with 'The Imperfect Enjoyment' by John Wilmot, Earl of Rochester, a poem which uses the 'c' word no fewer than four times. I barely noticed. I had an exam to complete; I didn’t have time to be offended; so I wasn’t.

Studies have shown that swearing makes us more tolerant to pain, can increase heart rate and is an emotional language of its own that aids self-expression. I sincerely believe that in a century or two the 'f' word and the 'c' word won’t retain the 'offensive' connotations they have today. Their meanings will continue to evolve along with the rest of us and the English language. Until such a time, though, I’ll have to mind my mouth in front of my mother.

The Daily Sketch
Deal or no deal?