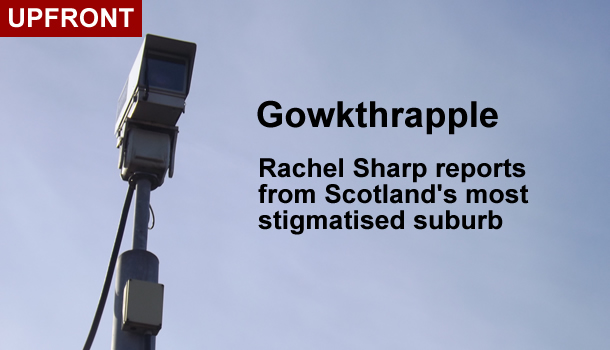 Assault, murder, racism, fly-tipping, drug-dealing: these are recurring themes in headlines describing Gowkthrapple, a small suburb of Wishaw. Dubbed Scotland's Big Brother capital in 2012 after North Lanarkshire Council had invested £250,000 in 190 CCTV units, it's also recently been crowned one of the least entrepreneurial places in Scotland by the Federation of Small Businesses (FSB).

In a study of 479 communities, FSB discovered that populations with the healthiest economies have more people who are their own boss. Gowkthrapple has a self-employment rate of only 3%, which means that in a community of around 1,300, fewer than 40 work for themselves. With the negative press all this has attracted, Gowkthrapple's notoriety tests the theory that there’s no such thing as bad publicity.

The buildings themselves show few signs of vandalism, which may be because there is one CCTV camera for every five people in Gowkthrapple – nearly three times the UK average. Yet wandering around an empty football pitch I discovered an unattended nest of empty Fosters cans, bottles of Glen's vodka and the rusted remnants of what was once a fridge beneath the shadow of a graffiti-ridden wall. It looked like a crime scene, and remembering everything I’d read about Gowkthrapple I suddenly got the sense that I was intruding somewhere I wasn't welcome.

Then I was nearly knocked off my feet by a spirited dog who had come bounding over to introduce himself. 'Don't mind him; he's friendly!' called a voice from across the field. Max, a nine-month-old sheepdog, and his owner, Bruce, have been residents of Wishaw their whole lives and Bruce shared with me some insight into the town and its neighbouring estate:

'It's a lot better than it used to be, but unless you're a hairdresser or a bookie there's not much for you here...It used to be one of the biggest places in Scotland for the steel industry but that’s all gone now'.

In the late-19th and early-20th centuries, the area was famous for homing the Pather iron and steel works, but once the steel trade began favouring larger companies the business went into voluntary liquidation in 1935. Wishaw also benefited from the success of the Smith's clock factory which opened in 1951, but its closure in the 1970s added to the town’s economic gloom. With the decline and eventual shutdown of the giant Ravenscraig steel works in nearby Motherwell, collapse was complete. Today, the biggest employers for North Lanarkshire, according to Voluntary Action, are NHS Lanarkshire, the Royal Mail, Shotts prison, and the local supermarkets.

But the inhabitants of Gowkthrapple are adamant that its bad press is unreasonable. As I spoke with two women in the scheme's only convenience store, one of them highlighted the sense of community among residents: 'Anyone would do anything for you. Everyone knows each other and you can see them blethering all the time. It’s really nice'.

Walking out of the shop I passed a sign for the Orchard View cafe, a canteen-styled room at the back of the Gowkthrapple citizens advice bureau. I asked the woman behind the counter for a cappuccino and she pointed me to a machine on my left. Once my discoloured hot milk had been dispensed I sat on one of the bright red plastic chairs on offer and quizzed two women in the cafe about the area. Both agreed that, in spite of its reputation, they couldn't imagine living anywhere but 'auld Gowkie', even with the shadow of the community police on every corner.

Places, like the people who inhabit them, are living things capable of change, growth and development, but Gowkthrapple displays the symptoms of social exclusion. It has been battered by history and bruised by the press, and every time we bestow on it a new title relating to crime and low-income we engender a sense of powerlessness. In reality, Gowkthrapple is a community-minded estate with warm people and bad cappuccinos.