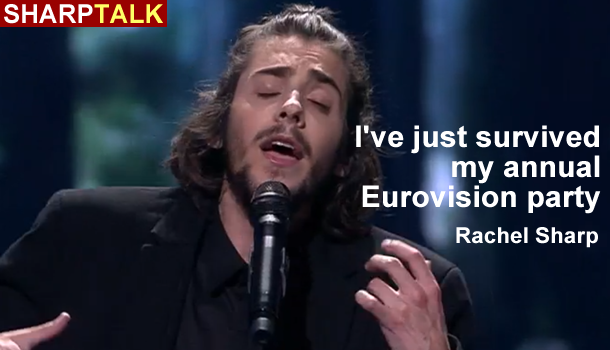 In a lot of ways, Eurovision is like Christmas dinner. It starts off fairly pleasant, but after enough time and alcohol the whole thing descends into chaos. Old tensions bubble to the surface, a drunk uncle does something inappropriate, disinterested teenagers sulk into their phones, and the host tries to salvage whatever's left with some light humour.

This year, tensions were running high before the night had even started. Hostilities between Ukraine and Russia came to a head when the latter withdrew from the competition after its contestant, Yulia Samoylova, was banned from entering Ukraine for having travelled to the disputed territory of Crimea in 2015 without proper authorisation from the Ukrainian government (a crime in the country since Russia annexed the region in 2014).

With Russia out of the competition, the audience would need someone else to boo. The UK, ironically competing with a song called 'I will never give up on you' in the middle of Brexit, was expected to fill that void. To everyone's surprise though, it acquired its highest score since 2009. This relative success was a slap in the face to our inflated sense of self-importance, since many of us expected to feel the wrath of our European neighbours during the voting portion of the show. Turns out they are as indifferent to us this year as they've always been. The second slap in the face came when Ireland awarded the UK zero points – an announcement that Graham Norton nearly choked on.

In a competition characterised by low-brow spectacles with virtually no intellectual value, it's difficult to determine the most embarrassing episode of the evening. Difficult, but not impossible. Some honourable mentions include Moldova's wardrobe malfunction, Belarus's over-zealous public display of affection, and the moment Romanian rapper Alex Florea forced a visibly unwelcome kiss on his 18-year-old yodelling counterpart. But as far as inappropriate displays go, the best came when an audience member draped in the Australian flag climbed up on stage during last year's winner's performance and pulled down his trousers for the world to behold before being tackled by security.

Moments later, Portugal's Salvador Sobral looked mildly bemused as country after country awarded their highest scores to him. As he sauntered on stage to collect his trophy, Graham Norton noted that he looked as 'nonplussed now as he has throughout this competition'. In his victory speech, he even took a moment to trash 'disposable, fast-food music without any content', rich talk for a man who had just won a competition that's very essence epitomises the phrase 'quantity over quality'.

And finally our hosts, who, in the spirit of this year's theme of 'celebrating diversity', were three white men who tried to hit on virtually every young, female announcer in front of an audience of 200 million. Cue awkward, third-language interactions over time-lapsed, live television. Their pre-recorded sketches, scripted audience interactions and pitiful jokes – my favourite being, 'he is our Eurovision fact machine. It's like a love machine, but with facts' – fell flatter than the Greek contestant's high notes.

Every year my friends and I laugh our way through this musical car crash, adding our own continuous commentary. This year, we wondered who would represent an independent Scotland in Eurovision: Susan Boyle, Billy Connolly, The Proclaimers? Would Alex Salmond announce our points or Jackie Bird? We scoffed at the 'celebrating diversity' theme which Ukraine seemed to have made no point in pursuing, and we joked that employing a voting system in which the contestant with the most votes wins might confuse some American viewers.

After my friends had gone home, as I was squeezing pizza boxes into the bin, I thought about the familial dysfunctionality of Eurovision. Like any decent Christmas dinner, it showcases age-old tensions, predictable alliances, and some of the most shameful, cringe-worthy jokes you'll ever hear. It might not be a celebration of what Salvador Sobral would call 'music that actually means something', but the fact that we turn up year after year to humiliate ourselves all over again means something just as important.