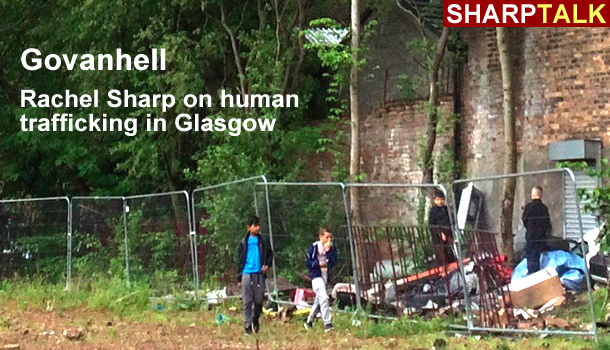 Photograph by the author of what passes for a playpark

'To be disposed of, a handsome black-boy, about 13 years of age, very well qualified for making a household servant' – Edinburgh Advertiser, 20 January 1769.

Until slave ownership became illegal in Scotland in 1778, it wasn't unusual to see notices like this one advertising slaves for sale or rewards for the capture of runaway slaves. You won't see such adverts in the Evening Times today, but just because you can't see something doesn't mean it's not there.

A recent BBC documentary called 'Humans for Sale' has revealed that human trafficking in Scotland is a thriving industry and the second most lucrative criminal commodity after drugs. Investigative journalist Sam Poling travelled to the slums of Eastern Europe to uncover the extent of poverty which drives men and women into the arms of traffickers. Once they arrive in the UK, promises of employment and accommodation are broken as these individuals are effectively sold as slaves.

The documentary begins at a service station in the outskirts of London where, three times a week, a bus from Romania pulls in carrying trafficked men, women and children. The bus unloads and its passengers are then divided into minivans which transport them to various parts of the UK, including the Glasgow district of Govanhill. Here, some are forced into sham marriages with men seeking residency in the UK, some are sold into indoor prostitution, others are exploited for labour, while some are even pushed into selling their organs.

This isn't the first time Govanhill has found itself at the centre of a human trafficking investigation. In February, Police Scotland targeted four flats in the district and arrested four men in connection with a trafficking ring, and in December last year, five car washes and three houses were raided after it was confirmed that large groups of men were being picked up every morning in Govanhill and being exploited in establishments across Lanarkshire. Since the documentary aired on 10 May, the latest wave of media attention has cast its shadow over the area.

As the MSP for Govanhill, all of this will be very embarrassing to Nicola Sturgeon, who in March issued an open invitation to all UK residents 'appalled' by Westminster to move to Scotland and be part of an 'outward-looking, compassionate country'. Clearly when she made this statement, her own constituency slipped her mind. It must be disconcerting for the SNP to have its back garden frequently labelled a ghetto and nicknamed 'Govanhell' by its own residents.

In early-19th century maps, Govanhill was referred to as 'no man's land'. In many respects, it still is. When I went to school in the area, less than 250ft from the SNP Govanhill office, it was fairly normal for local gangs to set off fireworks in the corridors or witness fights breaking out in and around the school grounds. At the time, it often felt like a piece of disputed turf that had never been officially claimed. Now, walking through the district nearly nine years later, the same sense of abandonment is palpable. Mattresses lay strewn on virtually every pavement, empty crisp packets are blown across pools of broken glass and groups of children can be seen playing in heaps of rubbish.

But there is life in Govanhill yet: the area is packed with so many different vibrant cultures; foreign scents and spices dominate the senses; independent stores selling speciality foods haven't yet been bought over by mass chains; kids chase a ball freely in the streets. It's a shame that a community with so much personality is overshadowed by such a dark reputation. As I look up at one of the tenement blocks on Westmoreland Street, I wonder who lives on the other side of the wall. There's no sign of struggle from out here in the street, but just because you can't see something doesn't mean it's not there.