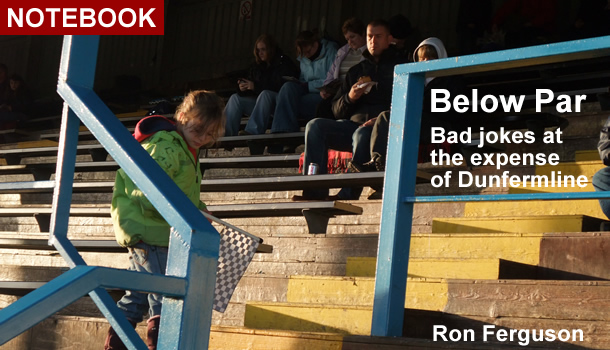 This is truly amazing! Yet another question in SR which can only be answered by reading the new, updated edition of 'Black Diamonds and the Blue Brazil'. The Lord moves in mysterious ways, giving me cunning opportunities to plug my enthralling book about my home town, Cowdenbeath, and its famous football team (for which I once played). This time, it is Ian Jack – a writer whose work I have admired for years – who is asking the important question. He wants to know how Dunfermline Athletic football club got the nickname, the Pars.

If he turns to page 50 of the new 'Black Diamonds', he will read these finely honed words:

What pleases the Blue Brazil fans more than anything is the fact that they will soon be playing their Auld Enemy, Dunfermline Athletic. The clubs have been rivals for more than a century, and the battles between the two sides have been the highlights of many a season.

How did the 'Pars' get their nickname? There are many theories, but the most plausible is provided by Fife football historian David Allan. He cites a case at Dunfermline Sheriff Court in 1913 concerning a dispute over the lease of North End Park between Cowdenbeath and the Greyhound Racing Company. During the proceedings, Cowdenbeath's lawyer attempted to establish the standing of Cowdenbeath Football Club in the football world. He asked the Cowdenbeath manager, Sandy Paterson, later to manage Dunfermline: 'Are you one of the principal teams in the Second Division, and almost on a par with such a team as Dunfermline Athletic?'

The Blue Brazilian fanzine was always full of jokes at their uppity neighbours' expense.

And so on. If this doesn't convince all SR's discerning readers that their lives will always be impoverished if they don't have a copy of this encyclopaedic tome on their shelves, I don't know what will.