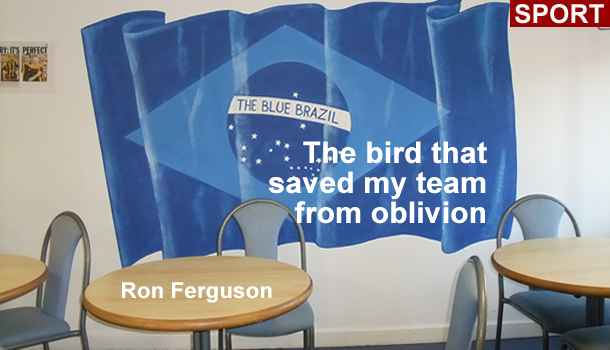 From Stromness to Cowdenbeath is a long journey. By public transport, it takes around 13 hours. You have to have good reasons for making the 26 hours return trip. So why have I done just that? I'll come to that in a minute.

My wife Cristine drove me from our Norwegian wooden house in rural Orkney to the terminal in Stromness. The first challenge was crossing the Pentland Firth. It can be a fearsome piece of water, with its turbulent clashing tides. I'm not a great sailor, but it has to be done. The alternative is to fly from Kirkwall to Edinburgh; but the return journey would not leave much change from £300. So I must go down to the sea in ships. (I'm reminded of theologian Juergen Moltmann's wry observation, 'Noah endured the stench on the ark by focusing on the size of the waves outside'.)

The breakfast on board the Hamnavoe was excellent. The Firth behaved itself. The 90-minute sail wasn't too bad; I've been on a lot worse.

You can lose the will to live on the journey south by bus. I was glad to have a break for lunch in Inverness. It was a stunning day. I decided to have a meal in the open-air at Pizza Express in Falcon Square. I rewarded myself with a large, cold glass of Pinot Grigio. It was lovely. It did wonders for my anxiety about the purpose of my journey.

It was while I was in benevolent spirits that the bird struck. A pigeon. What happened? Well, how can I put this delicately? One of God's creatures shat on me, a Presbyterian servant of the Lord.

My mood darkened. I was saved from a bout of Kierkegaardian angst by Mary, a senior waitress at the Pizza Express. She had witnessed the scene. Suppressing her desire to laugh, she came over to me and said: 'That is a sign of good luck!'

She helped me get myself sorted. Then she took away my plate. I had eaten about half of the large pizza. She came back soon with a new pizza. Then she appeared again with a new large glass of Pinot Grigio, with the compliments of the management. When I'd finished the excellent meal, Mary came over to tell me that there was nothing to pay.

What had begun as a bit of a disaster had turned into good news for a Scotsman. Now that is good customer service.

Restored to my normal beneficence, I settled down for a sleep on the bus...
So now I am in Cowdenbeath accompanied by my daughter Fiona, my elder son Neil, and my younger grandson, Dan. I am feeling very anxious. The team I support, Cowdenbeath, are due to play East Kilbride in the second leg of a play-off which may result in the Blue Brazil's third relegation in a row.

East Kilbride have already knocked Cowdenbeath out of the Scottish Cup at Central Park this season. If we lose this game, we will drop out of the senior Scottish game altogether. Cowden chairman Donald Findlay QC warns that this will probably result in the demise of the club after 136 years. The Fife club was founded eight years before the advent of Celtic Football Club.

On the way down in the bus I prayed one fervent prayer: 'Please let it not go to extra time and a penalty shoot-out.' Why? Because Cowden have failed to convert six penalties in a row, the last failure happening seven days before in the first leg at East Kilbride. I tell my family that if the game goes to a penalty shoot-out, Cowden will lose. We will be lucky to even score one goal.

The grandstand is filling up. Instead of the usual 300 attendance, the crowd is declared to number more than 1,600. Some are ghouls, hoping to witness the death throes of a Scottish football club with a colourful history.

Before the game I received a text from Sir Alex Ferguson (no relation) telling me he was rooting for Cowden. This information cheered the players in the home dressing room. Alex was a supporter of my book 'Black Diamonds and the Blue Brazil' when it first came out, and he wrote the foreword to the recently-published updated edition.

The referee blows his whistle and the game starts. I can hardly bear to watch. The rain is torrential. Cowden start aggressively and attack the East Kilbride goal. Within three minutes, the ball is in the EK net! What a roar goes up. That relaxes the Cowden fans a bit.

The play swings from end to end, with both teams giving as good as they get. Then, in 64 minutes, EK attack the Cowden goal and score an equaliser. A familiar Scottish dread sweeps over me. I have been here before, many times. Not another relegation, please.

The 1-1 score remains the same until the final whistle. There is no more scoring in extra time. Penalties it is. We're dead in the water. This is unbearable torture. I feel sorry for the players, taking spot kicks with so much at stake. Their nerves must be shredded. Mine certainly are.

Cowden defender Fraser Mullen, who scored the opening goal, strides forward to take the first penalty. He hits it firmly. Goal! Both teams keep up the scoring rate.

Then Jamie Sneddon, Cowden's 18-year-old goalkeeper, dives to his right to make a fine save. The EK player who missed is devastated. Then Cowden forward Liam Henderson goes up to take the kick that could keep his side in the Scottish senior league. He sends the EK keeper the wrong way, and the ball hits the back of the net.

After their terrible run of penalty failures, Cowdenbeath have avoided relegation in dramatic circumstances. I feel exhausated, though I haven't kicked a ball. Rather than running about celebrating, the Cowden players turn immediately to shake hands with their defeated opponents. There but for the grace of God. Pure class.

Gary Locke, the Cowden manager, invites me into the dressing room. The place is jumping. Then up to the boardroom for a substantial dram. I need it.

In the evening, my mind turns to that incident in the Pizza Express, Inverness. Mary had said that the birdshit from the sky represented good luck. From that moment on, East Kilbride were doomed. It was fated. The bird had spoken. God moves in mysterious ways.

Now I face the endless hours in the bus, followed by whatever the Pentland Firth chooses to throw at me. But I'm happy. My team has been saved.