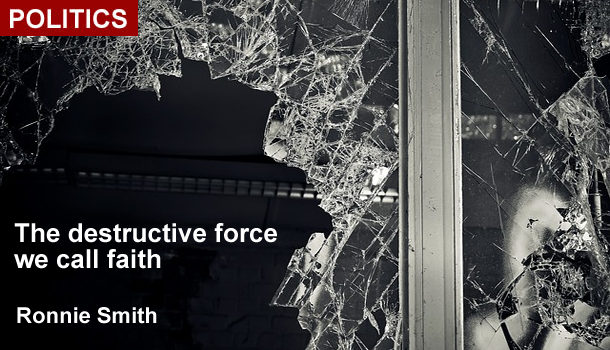 Faith has always been crucial to political activity and also in the lifelong voting behaviour of countless millions, in relatively stable democracies, over the past 150 years.

Faith in politics is the range of instincts that take us beyond rational thought and carry us over the natural threshold of our fears and base conservatism. Faith makes change possible. Faith can either inspire or prevent revolution. Faith builds and changes countries and the many lives lived within their borders.

Despite what many political activists, particularly on the secular Left, tell us, in the end there is very little fundamental difference between political and religious faith. This has always interested and often amused me, listening over many years to political savants ridicule the self-righteousness of our dwindling band of spiritual guardians.

Both these expressions of faith lie at the heart of our apparently perennial search for 'truth’, for something better in our society be it spiritual or material. Some of us seek a return to the way we have been told things are supposed to be, the core values first written down in the mists of time in a place far, far away. Some of us imagine a new set of values, strangely familiar to the ancient ones, to be established in the near future by means that remain mysterious but certain.

Perhaps the oddest thing is that these two faiths, spiritual and material, steadfastly refuse to recognise each other as such. The stubbornness of the human condition easily triumphs over any and all ideologies in the end and it’s a pity that we don’t invest enough faith in it instead.

Stuck in the middle of this faith sandwich, billions of people struggle to get by in an increasingly uncertain world that tends to make faith seem more than a little misplaced. Nonetheless political faith remains vibrant and we continue to see considerable evidence of its strength.

Nobody would sit in a freezing rented office in some God-forsaken high street at midnight, sticking leaflets and candidates’ electoral addresses into envelopes then licking them shut, without faith. Nobody would traipse around strange housing estates on the edge of town, in a darkened drizzle, to engage random strangers in contentious political discussion, without faith.

As in the high middle ages when most of Christ’s teaching, as witnessed by the Gospels, was turned on its head by those leaders of orthodox Christianity purporting to defend it, nobody rises to their feet in front of television cameras to clap the leader of their party while she or he talks utter and dangerous nonsense at conference, without faith.

Of course faith begets loyalty and we know that loyalty is the necessary glue that allows political parties to think and act with the necessary degree of unity at important times, particularly elections. However loyalty can be questioned, it can change or collapse under stress or in light of certain events.

Tony Blair’s leadership strained the loyalty of many traditional, often life-long, members of the Labour party. Many left the party and not quite so many remained. Yet within both groups, if I may call them remainers and leavers, retained their fundamental faith in the mid-20th-century values of the party. Both believe that they can rebuild its ideological foundation and put a ‘democratic socialist’ programme before the electorate in the near future. Both want roughly the same but follow two different strategies.

In Scotland the remainers decided to ‘fight the good fight’ within a Labour party led from London by Jeremy Corbyn but without the help of their Scottish leader. Kezia was born too late to understand the basics of good old democratic socialism and is therefore not on the same page as the faithful. Her faith is not strong and, in these unstable times, that is both good and bad for her.

The leavers in Scotland decided to join the SNP and follow a strategy of taking it over, turning it into the old Scottish Labour party and establishing a historical loop, not leap, of faith. In the course of this enterprise the Scottish Labour leavers encountered the SNP’s traditional membership whose faith is at least equal to their own. As Tommy Sheppard’s recent failed attempt to become deputy leader of the SNP has shown, and despite the predictable denials to the contrary, there is now a conflict of two faiths within the party as the socialist cuckoo wrestles with its resolutely populist host. Lids cannot stay on boiling pots for ever and there will be a denouement at some point.

Those supporting the departure of the United Kingdom from the European Union have done so out of simple faith. They wanted their country ‘back’ and now they have it. Where ‘back’ happens to be seems to be anyone’s guess but the important thing is that the country is ‘back’.

One is allowed to describe ‘Brexit’ as faith-based for two reasons. Nobody campaigning or voting for it has yet been able to provide a clear or even truthful idea of what it is and what the material and political consequences will be for the country and its citizens, now also ‘back’. Brexit is therefore like heaven. Some of us believe in it but can’t describe it in any way. Others deny it but still treat it with fear and respect.

The second reason is that if one takes a passing glance at the current structure of the British economy, one notices that it is not geared for the level of trade that will be necessary to survive outside the EU.

GDP, that fabulous oft-quoted guarantor of Brexit economic success, remains high. GDP is based on consumption and British citizens continue to consume at prodigious levels. However two other important things are also high. Last month the accumulated personal debt of the British reached £190 billion and, as I wrote in an earlier piece, Britain has run a continuous monthly balance of trade deficit of sometimes as much as £5 billion, including what used to be called invisible earnings. We spend a lot, we borrow a lot and we import far more than we export. Only faith would allow a population and their leaders to choose Brexit at this point in the country’s economic journey.

Many consider Donald Trump’s recent victory to be a matter of faith but I see a difference in the narrative across the Atlantic. Trump saw the opportunity created by the enormous fracture in US politics that has grown, more or less, since Ronald Reagan. During that period the number of disaffected people steadily increased and globalisation became increasingly perceived to have devastated the industrial and agricultural economy in the centre of the country.

These people had lost faith in their country’s leaders. Donald Trump simply and brutally set about selling himself to those people as someone they could believe in and, with an understanding of how the US Electoral College works, he succeeded. In this particular case there was a vacuum of faith, rather than a surfeit, which one campaign was able to fill. We’ll see for how long.

Taking a step back from the often hysterical frontline I think we can see how faith has become a driving force in the politics of some western countries. This has been called the era of ‘post-truth’ politics but I’m not sure what that means considering that truth has always been a floating currency in the political arena. I prefer to think of our time as the era of intellectual laziness and easy money for those occupying positions of power, easy because faith has removed much of politicians’ fear of accountability.

Faith in Scottish politics has accentuated our existing tribal approach to its application. I believe that if Nicola Sturgeon and the current Scottish government suddenly privatised everything that they are responsible for, including health, education and Police Scotland, they would still be considered left-of-centre by the faithfully numb 45%.

I think it very likely that the British government will be prevented from negotiating sensible terms for departure from the EU by those whose faith in having Britain back blinds them to the creation of the world’s first banana constitutional monarchy.

I believe that the situation in the USA is slightly different. In both Edinburgh and in London, there is a complete absence of any kind of economic solution for the future of our shared island. Trump, having rebuilt the trust of a large number of people over the past year, must deliver economic recovery to the flyover states in order to survive. Furthermore, he has many powerful enemies who will ensure that he is held to account if he fails, whereas British opposition parties presently couldn’t fight their way out of a wet paper bag.

In Britain, faith is generating a strong negative political energy: a failure of belief in accountability, in the importance of the separation of powers, of the need for the accurate reporting of facts and a disinterest in evidence-based analysis. Faith is one of the engines that drives authoritarianism because it denies the need, never mind the right, to ask questions.

Faith, in the Scottish and British case, is political malware.