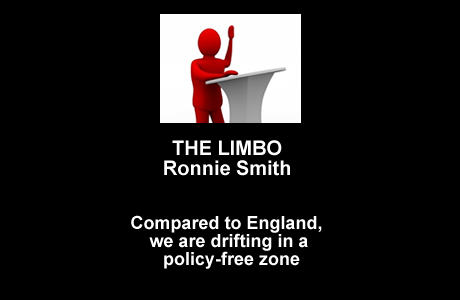 The recent scandal of the Forth Road Bridge closure brought into sharp focus the political dilemma facing the SNP and the Scottish Government in 2016. Primarily that they must, as expected, win the Scottish Parliamentary elections and continue to form the government in Edinburgh. To do this they must maintain the strange level of popularity that they have established among roughly half of Scotland’s population while at the same time continuing to fail in aspects of government due to a perceived lack of funds.

I say perceived because a number of the things that they are or are not doing, as the case may be, are as a result of their particular view of Scotland’s economic future. In fact, if I may cut to the chase, the current SNP government of Scotland has cut, centralised and privatised in exactly the same way that Margaret Thatcher did and clearly supports a version of George Osborne’s 'Austerity’ strategy. Their political trick is to keep blaming everyone else for these aberrations and have enough people believe, through political gimmicks like the freeze on council tax, that everything would be all right if only Yes had won the referendum. In effect, 'the future is ours but current reality is someone else’s responsibility’.

In August last year I travelled across the UK by car. My itinerary took me from Luton Airport to Stratford-upon-Avon, where I had coffee adjacent to the horrific building erected as a Shakespearean cultural centre. Then to Birmingham to bask in warm sunshine while watching an athletics event and then on to Harrogate to stay the night with some very good friends.

I feel that I can claim to have criss-crossed England over a two-day period, and that I made use of a substantial portion of the country’s motorway network. In every case, on every motorway, there were long delays caused by extensive roadworks. Every major trunk road linking English cities north to south and east to west is being significantly upgraded, widened, improved, resurfaced and having impressive new junctions constructed along the way.

I am used to delays on motorways over many years of driving but this usually happens on one route at a time resulting from specific weather conditions or minor road works. What I saw this time was a systematic upgrading of the entire motorway infrastructure in England. 'Impressive’, I thought as I sat in the car, rumbling along in second gear. I started to think about the cost of all this work because it is clearly a massive amount of investment, in fact billions of our great British pounds.

Then I started to think about the possibilities that would be created for the English economy if the Conservative government succeeds in getting its HS2 rail project off the ground. An upgraded and modernised motorway network, HS2 and modern high-capacity airports, establishing a sound base for substantial and sustained economic growth spread beyond London and the south-east.

Moving up a gear, I started to think about the Transatlantic Trade and Investment Partnership (TTIP) negotiations taking place between the EU and the USA. Obviously the Conservatives in England don’t just support TTIP, they are preparing for it, getting ready to reap all the benefits as the party of business and the free market. In fact, they are preparing England for sale, or to receive massive amounts of investment depending on your perspective, and not only by upgrading the country’s infrastructure.

They are changing the rules of the labour market to make things very attractive for global corporations: zero-hours contracts, stagnating salaries, vast cuts in the benefits budget and the transfer of state spending into investment in 'productive’ areas of the economy. In addition they are finalising strategic privatisations and adjustments to fiscal and economic policies in expectation of the divestment of remaining state-owned assets to an expanded and further de-regulated private sector.

Notice that the UK’s debt has not fallen during the period of austerity. In fact it has reached new record levels. The British government has borrowed as well as restructured its own finances in order to invest in future growth. Borrowing is merely a business process that succeeds if it results in profit.

All the arguments about the effectiveness of austerity as an economic policy have been largely a waste of time as far as England is concerned. This is because, for English Conservatives, austerity is not a policy in itself. Rather it is a tool, a mechanism, through which TTIP can be accommodated and allow England to become a very attractive destination for investment. Austerity does not simply punish poorer people, it makes them irrelevant. It turns them into semi-citizens and confirms them as an underclass, an asset, a low cost centre and so on and so forth. Furthermore, an upgraded and open-market England does not need membership of the EU.

What of Scotland’s response? From Harrogate I drove across the border into the auld country.

Transport is of course a devolved matter controlled by the Scottish Government. There are no major delays on the ageing Scottish motorways that I travelled on. The beautiful road to Inveraray and on to Oban remains steadfastly single lane. The A9 from Perth to Inverness cannot be widened because, apparently, there is too much land on either side.

There are no government plans to upgrade the Scottish rail network in any meaningful way using state funding and, regardless of where Scotland’s economic future may be physically located, HS2 will not reach Scotland. The reopening of the line from the Borders into Edinburgh in 2015 and the completion of the second Forth Road Bridge benefit only the country’s overheating capital.

Neither the Scottish Government in Edinburgh nor Scotland’s group of representatives at Westminster, both firmly controlled by the SNP, are saying anything unified and meaningful about their position on either TTIP or the more immediately controversial issue of fracking. Compared to England’s obvious enthusiasm and preparation for both Scotland appears to be drifting in the midst of a policy and statement-free limbo. Remember, without the possibility of what is endearingly termed 'indyref2’, the sale of Scotland’s assets under the terms of TTIP and the country’s opening to even tightly controlled fracking, when the moratorium inevitably ends, are the two most important developments facing Scotland over the next 10 years.

Scotland cannot afford the spending on infrastructure that we see in England, nor can the Scottish Government borrow and so appears hamstrung. However, under the terms of TTIP, Scotland’s transport infrastructure could be modernised using private capital and management. So could the Scottish health and education sectors and so, using a slightly different model, Scotland would follow England as a target for major private foreign investment.

The SNP’s problem is that they can’t make their privatisation strategy, under TTIP, public. Remember, they are a 'party of the Left’ and they have an election to win. That is why they are largely silent on these issues and that is why their highly developed sense of party discipline is so important.

Make no mistake, this year’s elections to the Scottish Parliament are extremely important and it is this event, rather than last year’s referendum, that will change the game in Scotland for the future.

Ronnie Smith
Politics
Compared to England, we are
drifting in a policy-free limbo

Paul Tritschler
The Earth in 2016
How long before an asteroid
hits the planet?

Gerry Hassan
Society
Whatever happened to the
Scottish tut?

Next edition of the Scottish Review: 20 January 2016
Subscribe Today