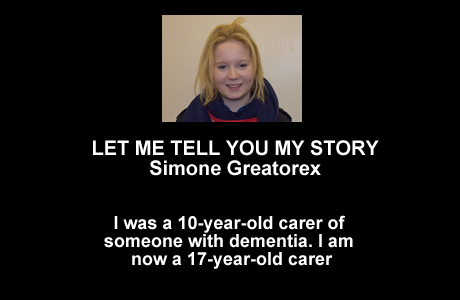 It’s hard to put yourself in the shoes of a person with dementia. It is even harder to cope with having to care for that person. I was a 10-year-old carer. I am now a 17-year-old carer. Let me tell you my story.

I was only five years old when he started going downhill; now I hardly remember him as himself. All I remember is those evenings I’d come back from school to someone who remembered me a little less than the day before. My age was irrelevant to him, he only thought of me as his little girl and had no idea where we were, how old I was; he only knew my name and knew that he loved me.

I don’t remember much; he was clever at covering up his inability to do things that had always been second nature. Where we lived at the time was a struggle. Owning a village shop was challenging, and mum noticed how dad got up an hour earlier because it took him longer to get dressed and do his routine. He slowly remembered less and less, he’d forget the little things. He wouldn’t remember when we said we’d be out for two hours. He would forget my weekly trampoline lesson and several times he forgot where reverse was on the gear-stick. Cleaning became an obsession; he would constantly wash the floors and occasionally we’d find peculiar things in the washing machine, such as a few porcelain dolls. Throughout all of this he’d have a good excuse for not remembering. He then stopped socialising. As a child, I remember it being difficult going to events where all my friends had both their parents by their side, yet I only had mum.

Mum knew that something had to change, so we sold the shop and took an extended holiday. We travelled across to Australia, New Zealand, Thailand and Singapore for our last family holiday. Although he coped, he did become more defensive. His generally good sense of direction failed him. The nadir of our trip abroad was when he had three keys to where we were staying; yet he couldn’t open the door so he sat in the garage for hours waiting for our return. This event was one of many that convinced mum to cut the holiday short. When we returned home dad was meant to be tiling our garage but he wasn’t able to figure out how.

So as my life went on and I went back to school, I was less ignorant of what was happening around me. I remember noticing arguments between my parents and how mum was more uptight and less her normal self. Looking back now I know how much her stress levels must have risen, and looking after an eight year old while watching your husband lose himself must have been incredibly difficult. I only found out recently that mum had threatened dad with leaving him unless he went to the doctor; he was stubborn like that. However, it wasn’t as simple as just going to the doctor. The doctor couldn’t see anything so he was referred to a neuro-surgeon. He had a brain scan, which didn’t show anything drastic, and he was then referred to a neuro-psychologist. At 50 he was diagnosed with early onset Alzheimer’s.

Mum tried to keep him busy with jobs around the house yet his cleaning OCD overtook him. The washing machine was on almost 12 hours a day. My growing consciousness of dad’s illness had been tackled. Mum told me what she thought I would understand. She explained my dad had a brain disorder and that he was ill. She prompted me to ask the right questions and be inquisitive rather than giving me lots of information that could upset me. I’m told now that I used to just walk away and say that I didn’t want to talk about it any more when I had heard enough. Importantly, mum would never lie to me.

Thinking back on it now, in dad’s lucid moments he used to tell mum how I was the most important thing; my happiness was a necessity. In retrospect we had so many laughs together. He used to entertain me during the days I was at home, when he’d drag the dog around the house while she grabbed hold of the bottoms of his jeans. My life was almost normal as mum continued to push on.

When he became psychotic it became harder to keep him on an even keel. He wouldn’t take his medication, as he didn’t believe it helped and he thought we were trying to poison him. One morning we awoke to an open front door and no sign of him. The police found him hours later, five miles away in a dried-up river bank. He then went into a psychiatric hospital.

After a few months, I had my worst day yet. I was at school in a French lesson when the registrar came in and said I was being collected as something had happened. Aunt Sarah arrived and took me to the hospital to meet mum and my unconscious dad after he’d had a fall and fractured his skull. While being in hospital he had to be off his meds, and it was at this point that anyone other than mum and I had seen him being aggressive. After a few weeks he was moved into full-time care.

I was lost. I hated that mum spent a lot of her time running to and from the care home. I remember feeling like I should visit him, yet I couldn’t pluck up the courage to get in the car. I was so close, so many times, yet it never happened. A few months later, mum woke me up at seven and told me he’d gone. She said it was best, and I understood that, but I didn’t understand why it had all happened to me.

This article by Simone Greatorex of Pangbourne College, Reading, won the England and Wales schools’ writing project, organised in conjunction with the Scottish Schools' Young Writer of the Year