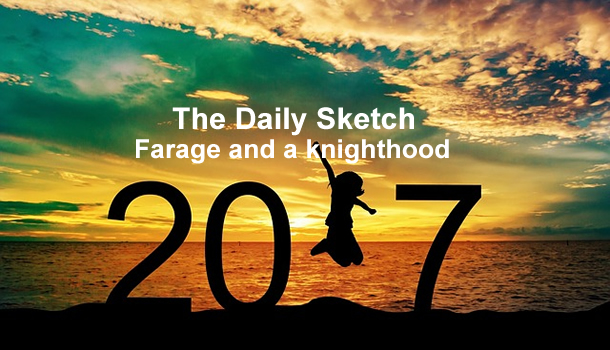 The House of Lords voted by 358 to 256 to guarantee the rights of EU nationals living in the UK. The Labour amendment required the government to introduce proposals within three months of article 50 being triggered which would give EU citizens the same residency rights after Brexit as they enjoy now. The government gave no sign that its hard-line approach had been softened by the Lords' rebellion and expressed 'disappointment' at this first defeat, which will be easily overturned when the bill returns to the Commons. The former leader of the Lords, a rich Ayrshire landowner rejoicing in the name Lord Strathclyde, called the decision of his fellow peers 'wrong-headed and muddled'. Farage accused his party's only MP, Douglas Carswell, of preventing Ukip from becoming a full-blown anti-immigration party. Leaked emails appeared to show that Carswell had blocked the ambition of Farage, a self-proclaimed champion of ordinary people, to become a knight of the realm, suggesting instead that he receive a lowly OBE for services to headline writers. According to Farage, there is no link between these events.

Trump's attorney-general, Jeff Sessions, was revealed to have had meetings with the Russian ambassador to the United States during the presidential campaign, at a time when US intelligence officials were investigating Russian interference in the election. Trump's first appointee as national security adviser, Michael Flynn, resigned for the same reason. A spokeswoman for Sessions, while confirming that the meetings took place, said they were not related to the presidential campaign. They were apparently of so little import that Sessions omitted to mention them when he gave evidence under oath to his Senate confirmation hearing about possible contacts between the Trump campaign and Moscow. The scandal in France known as Penelopegate, named after the Welsh wife of the right-wing presidential candidate Francois Fillon, entered a new phase when judges summoned Fillion to account for allegations that he gave Penelope and their children hundreds of thousands of euros from the public purse for doing fictitious jobs. The embattled Fillion vowed to fight on regardless. A United Nations commission of inquiry accused the Syrian government of deliberately attacking an aid convoy near Aleppo last September, committing a war crime in its forced evacuation of opposition-held parts of the city, destroying hospitals, and repeatedly using chemical weapons. Scientists in Canada who examined the contents of two public pools found that swimmers had released enough urine into one of the pools to fill a medium-sized dustbin.

Northern Ireland goes to the polls today. Following the Scottish first minister's suggestion that the UK government was using Brexit to undermine devolution, the secretary of state for Scotland, David Mundell, gave an 'absolute guarantee' to the Commons that after the UK leaves the EU the Scottish parliament and Scottish ministers 'will have more powers than they have already'. The manufacturers of Irn Bru said they were halving the sugar content in the drink. Researchers at Glasgow University detected a link between abnormal sleeping patterns and an increased risk of obesity, claiming that an afternoon nap, repeatedly recommended as being good for us, is actually helping to make us fat.