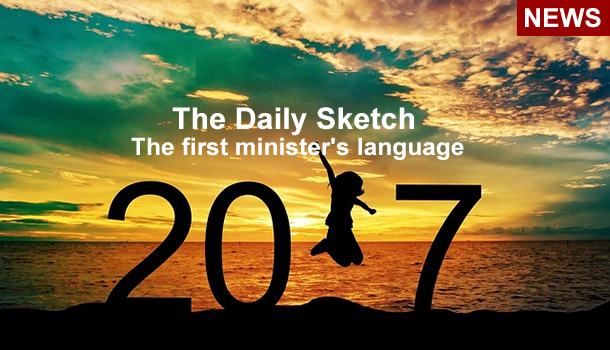 Asked by the BBC if autumn 2018 was a likely date for a second independence referendum, the first minister, Nicola Sturgeon, replied: 'Within that window of when the outline of a UK deal becomes clear and
the UK exiting the EU, I think it would be common sense for Scotland
to have that choice, if that is the road we choose to go down'. Translated into recognisable English, the statement might read: 'Yes, but I haven't finally decided'. The first minister, while she ponders the road she chooses to go down, could also explore every avenue, if that is the avenue she chooses to explore. For an example of plain speaking, it was necessary to visit the Lancashire town of Rochdale, where the council wants to introduce a 'public spaces protection order'. Anyone caught using 'foul and abusive' language could be moved on, warned, or have to pay an on-the-spot fine. Asked by the Guardian newspaper for his opinion of the proposal, a 23-year-old resident replied: 'It's a load of bullshit. They [the council] need to get their heads out of their arseholes'. The meaning here was relatively unambiguous.

The grim-faced functionaries from the suburbs who edit Britain's newspapers took a poor view of Philip Hammond's attempts to introduce humour into his Budget speech. The Daily Mail said it was no laughing matter that the chancellor had decided to increase the Class 4 national insurance contributions of the self-employed from 9% to 10%. Some newspapers interpreted the move as an attack on 'white van man', as if the only people who are self-employed in Britain are dodgy characters driving unmarked vehicles. Hammond's predecessor, George Osborne, is pulling in £650,000 a year working four days a month for some Wall Street outfit and has earned almost £800,000 for making 15 speeches since last July, according to the new register of MPs' interests. The 'director of human resources' at Pret a Manger told a House of Lords committee that only one in 50 applicants for jobs with the chain is British. Papers released into the National Archive show that the Thatcher government resisted calls for a public inquiry into the brutal policing of the 1984-85 miners' strike because
ministers feared that such an inquiry would be biased against the police.

Experts at the British Library who have tested pairs of glasses belonging to Jane Austen believe that she was virtually blind at the end of her life, possibly as a result of arsenic poisoning accidentally administered. The World Anti-Doping Agency said it was considering a blanket ban on a drug used by the English cyclist, Bradley Wiggins ('Sir Bradley'), before his victory in the Tour de France. The drug is able to reduce weight without impairing an athlete's power. In the Champions' League football, Barcelona defeated Paris Saint Germain 6-1 in the second leg, overturning a 4-0 first leg deficit to go forward to the next round.