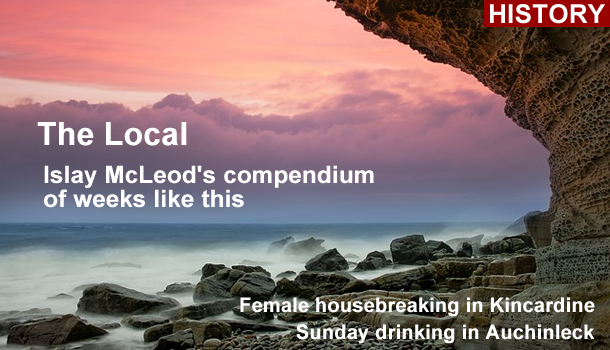 The Scotsman
15 May 1900
A proposal has been submitted to Dunfermline commissioners to light the town by means of electricity, the necessary power to be produced by burning the town's refuse. The burgh engineer, who reported on the scheme, says the town could be much better lighted than it is just now without using a pound of coal in generating the power.

Dumfries and Galloway Standard
15 May 1850
Anatomical investigation has not exhibited the slightest difference of organisation or construction between the vocal organs of the most harmonious and most discordant singers. All distinction appears to be based on the amount of nervous energy existing.

Ardrossan and Saltcoats Herald
17 May 1873
Kilbirnie
The term day passed by here very quietly. There were a few who changed dwellings. The only thing of any public note which occurred that might be considered interesting to those who are about to change houses, however, was the case of Mr John Orr, the occupant of a house in Main Street. He had not been warned to remove, and resisted on that ground. The house was let to an incoming tenant who also was not warned to remove, but whose house was likewise let. As there was some feeling got up amongst the tenants there was a good deal of talk as to who was to take a few nights lodgings in the streets till the question of removal was tried, a number being in a similar predicament: but on the arrival of the term day the incoming tenant to Mr Orr's house compromised the case, and both parties came to an agreement. We have no doubt this will be a warning to landlords to give their tenants due notice when they wish their tenants to remove. Mr James Gilmour, solicitor, Kilbirnie, acted for Mr John Orr, and Messrs J & J Boyd, solicitors, Glasgow, for the incoming tenants.

Dundee Evening Telegraph
18 May 1926
Addition to Interior of Perth Church
A handsome addition to the interior of St John's Church, Perth, which has been restored as a memorial to the men of the county who fell in the war, is a magnificent candelabrum. The candelabrum, which formerly beautified St John's, eventually, became the property of the town council, who have again restored it to its place in the historic building. The property committee of the town council have obtained a receipt from the Kirk Session of St John's to the effect that the candelabrum is given on loan and that the right of ownership still remains with the town council, who would be entitled to require its return to them at any time.

John o' Groat Journal
18 May 1900
Relieving 'Macfecking'
On Sunday last the town hall bell was rung for the benefit of the Free Kirk folk, as the Auld Kirk bell is not now rung at the usual hours. It being rung in cheery tones about 20 minutes to two o’clock, hundreds of people imagined it was an intimation of the relief of Mafeking, and ran towards Bridge Street with gleeful faces. When the wind wafted the sounds to the outlying districts one little toddling urchin ran to his father, who was enjoying a mid-day snooze, and rousing him, exclaimed – 'Faither, do ye no hear the Wick bell! Macfecking's relieved!' [The Siege of Mafeking was a 217-day battle for the town of Mafeking in South Africa from October 1899 to May 1900.]

Alloa Advertiser
18 May 1850
Kincardine: A Female Housebreaker
The dwelling-house of a labourer in the neighbourhood of Kincardine was lately broken into in the absence of the occupants, and plundered of several articles, consisting of apparel, &c. Information was given to the constabulary, who obtained a clue, and started in pursuit of the suspected perpetrator, a female, to Stirling; there the trace was lost, but on returning by Tullibody and Dollar it was regained, and followed up until near Auchtermuchty, where the unsuspecting delinquent was apprehended, and most part of the stolen articles found in her possession. The prisoner was conveyed to Dunblane and delivered over to the authorities. It is said that she has already figured in the docks of criminal courts in several counties in Scotland.

Ayr Advertiser
20 May 1880
Sunday Drinking at Auchinleck
(To the Editor of the Ayr Advertiser)
Sir – It is generally understood that some of the large towns in Ireland are exempt from the Sunday Closing Act, but it is not generally understood that such exemption is granted to villages by the Sunday Closing Act for Scotland. Somehow it would appear that Auchinleck or Cumnock has such privilege. For the last two or three months, many drunk and incapable, and, in some cases, disorderly persons, have been seen going from Auchinleck towards Commondyke Rows and such places, very much to the annoyance of those who live in the vicinity, and who wish to spend the Sabbath in that quiet and orderly manner which is so conducive to the social and moral well-being of humanity. Who is to blame for such reprehensible scenes? Is the local police constable doing his duty in the circumstances? Can he not see whence the evil comes? Or are the back doors of the pubic-houses still open? In some large towns the back doors have been 'clayed up' to make it more easy to detect infringement of the laws. If the police constable cannot get to the guilty sellers, because of the open back doors, might not the J P's cause them to be shut up, and thus facilitate the maintenance of the Sunday Closing Act. It is to be hoped that a 'nod will be as good as a wink to a blind horse', and that those who are to blame for the state of things complained of, will open their eyes and do their duty to themselves and the public henceforth. – Yours, &c. One of the Public