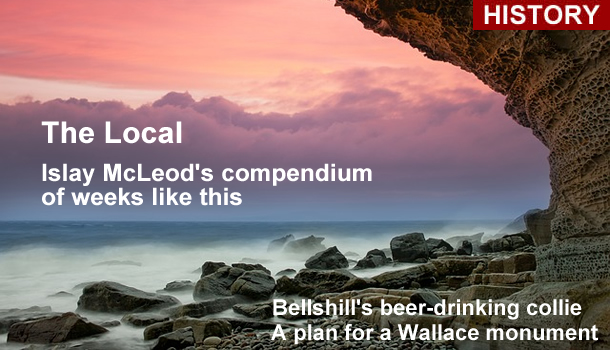 Orkney Herald
23 May 1865
The Assassination of President Lincoln
Sir – I observe that the town council of Wick have resolved to send address of condolence and sympathy to the American government and Mrs Lincoln on the death by assassination of the president of the United States. Similar addresses have also been forwarded across the Atlantic from almost every town in the kingdom. I think that looking at the deep atrocity of the deed, and the opportunity which it affords of maintaining friendly relations with America by heart-felt expressions of sympathy – the town council of Kirkwall should also follow the good example of their neighbours, and send addresses through the American minister in London.

The fact of this being the most northerly royal burgh in Her Majesty's dominions would make the addresses all the more acceptable to our brethren in America. The atrocious act of assassination excited as much horror here as in other parts of the country, and it would be but right that the feelings of the community should find expression through their representatives. It is scarcely necessary to add that every person is alive to the great importance of maintaining a cordial relationship between the two greatest countries of the world, and there can be little doubt that addresses of sympathy and condolence are calculated to have a happy effect in this direction – Ian, &c.

Ardrossan and Saltcoats Herald
24 May 1889
Navigators in Trouble
Four young people, who were not thrang at hame, put to sea in a small boat, on Thursday last, and landed on the Horse Island, reckoned about a mile distant from the harbour. Instead of beaching the boat in the natural sandy harbour on this side of the island, so well known to all who frequent it, they put her in on the rocks, made fast, and went off on an exploring expedition. They had been a considerable time away: and as the tide was on the ebb, they found on return that the boat was fast on the rocks, when all hands – two lads and two lassies – set eagerly to work, to get her off, but to no purpose, so they had to desist – after making an opening in her bottom which would have been made worse had they further attempted to launch her.

Being too heavy for the castaways, there was nothing left for the skipper but to rend some of the company's garments, and run up a flag of distress, or wait for the turn of the tide. The latter expedient was agreed upon; and having wrung their hearts, if they did not rend their garments, over the matter till early morning they resolved, notwithstanding the leaky condition of their boat, to make for port, which, by dint of constant bailing, the two youthful couples reached about the same time as the Belfast boat – those on board the ship thoroughly enjoying the predicament. Ten minutes after the party ceased bailing, the boat had filled and sunk. – Another party out sailing since then, through dropping an oar, had a midnight cruise, but got back to the harbour early in the morning.

Dundee Courier
25 May 1900
Broughty Ferry: Death of an Old 'Postie'
Through the death of Mrs Knight, Fort Street, on Wednesday, an interesting link with the past has been broken. When in her 'teens' Mrs Knight – at that time Marjory Annandale – performed the duties of 'postie'. In these days the letters for Broughty and district were conveyed from Dundee by Marjory, who was employed by the carrier of the day, named Petrie. In doing so she drove a pony yoked to a vehicle, and on arrival here with the missives her duties extended to delivering them. It need hardly be said that the task of a 'postie' in those days was a light one compared with what it is today, but Marjory did what was required in a pain-staking manner, and was always proud to recall her postal service. She was a most intelligent old woman, and despite her 80 years was, up to a short time before her death, wonderfully hale. Her husband predeceased her a goodly number of years ago. She has left three sons and a number of grandchildren and great-grandchildren. One of her sons was drowned at sea, and a son-in-law lost his life in the Osprey disaster about 11 years ago.

Dumfries and Galloway Standard
25 May 1940
Less Turnip Trouble
A slime fungus causes the disease finger and toe in sour soils, says D Clouston in 'The Farmer and Stock-Breeder'. The acidity or sourness of the soil can be reduced by applying lime. Though this does not eliminate the disease nicely, the yield of healthy roots is much increased. We are fortunate now in having available at least two turnips which are highly resistant to the disease. There is the Bruce, a purple top turnip, and for those who are prejudiced against that colour, the Wallace, a green-top yellow.

Dundee Courier
28 May 1900
A tiny girl, four years of age, was spending a night away from home. At bedtime she knelt at her hostess' knees to say her prayers, expecting the usual prompting. Finding Mrs B unable to help her out, she concluded thus – 'Please, God, 'scuse me. I can't remember my prayers, and I'm staying with a lady that don't know any.'

Inverness Courier
28 May 1909
A Fox's Larder
Two gamekeepers traversing their ground on one of the leaks of the Pentlands observed a rabbit warren which bore traces of being the abode of some animals less innocent than the conies. The keepers dug a trench, and came upon the heart of the burrow, which had three compartments, in each of which young foxes were found, the litter being eight in all. Within the burrow was found the foxes' larder, which consisted of 20 lambs, 12 rabbits, two hens, a duck and a grouse. The cubs were taken possession of, and the vixen was trapped. Other three adult foxes were captured, making a total capture of 12 foxes within the area of only one hill summit.