Storm of the week
Cap S Storm Cap H Henry (the BBC's respectful way of dealing with the latest high wind, as if it were a distinguished visitor of some sort). Henry...Gertrude...gosh, aren't they awfully posh? And ever so slightly uppity...a case of any storm you can do, I can do better. 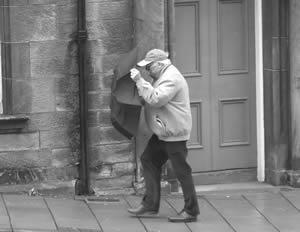 The Midgie's essential guide to railway travel
1. Abellio is contracted by the Scottish Government to run trains in Scotland but prefers to run buses instead. They're called 'road replacements'
2. Don't bother going to Stranraer in the foreseeable future. Don't bother going to Stranraer at all
3. Don't go anywhere
4. Virgin Trains, which used to run a direct service between Glasgow and London, has a call centre in India whose operatives have been trained to inform customers that there is no longer a west coast rail link because of problems at Leamington. The truth is (listen to The Midgie) that you can still occasionally get to the south from Glasgow, and to Glasgow from the south, by changing at Carlisle
5. But if you try to change at Carlisle on your return to Scotland, assuming you want to return to Scotland, you're liable to be marooned in Carlisle because of fresh grief at Kirkconnel, an obscure village in Dumfries-shire where bad things happen to trains on an almost hourly basis
6. In the event of the line closing at Kirkconnel yet again, you will be placed in one of two long queues enclosed by steel barriers in a side exit of Carlisle station, one queue marked 'Glasgow', the other 'Edinburgh', and ordered to stand there indefinitely while they organise the road replacements
7. Even if you're not marooned in Carlisle, and manage to get on a train, the new route to Glasgow from Carlisle somehow takes 2 hours 10 minutes (time by car: around 1 hour 30 minutes)
8. The disruption on the west coast is not caused by problems at Leamington, a spa in Warwickshire, despite what Mumbai say. It's caused by 'severe structural damage' at Lamington, a viaduct in Lanarkshire so badly affected by Storm Frank (remember Him?) that, as a result of a single night of high winds, it was in danger of collapsing into the Clyde
9. None of this ever happens to Michael Portillo

Scandal of the week
By the Midgie's investigations editor-in-chief, Muck O'Raker
Two senior officials of the University of the West of Kirkintilloch visited the archipelago of Denny to explore the possibililty of a global outreach programme with nearby Dunipace. One of them posted a photograph of a palm-fringed beach believed to be linked to a luxury hotel in Bonnybridge

The David Bowie award for emotional incontinence
The twitteratti on Wogan

The Adolf Hitler award for humanity
The odious Danes for agreeing not to remove the wedding rings of asylum seekers, while confiscating just about everything else

Stat of the week
42. The number of migrants drowned in a single night trying to reach Greece

Gift of the week
The £479m paid into the bank account of Najib Razak, prime minister of Malaysia, by the Saudi royal family

Expense account of the week
Robert Peston, a journo so grand that he travelled first class on the flight back from the Davos gabfest while Justine Greening, a mere cabinet minister, went economy

Who didn't win the Iowa primary?
The Donald, heehee