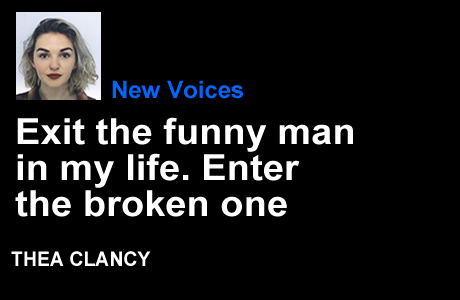 When you lose someone important to you, pins and needles engulf your body until you are left numb. This numbness will slowly fade, but for a while you won't feel anything.

My funny man was so precious to me. He would awaken my ears in the morning to new sounds he had discovered. Every melody and every beat was uplifting. Our time together was always memorable. We would find currency for our adventures in the form of laughter and smiles. Yes: I adored my funny man.

But as I grew up I began to see my funny man’s façade. He was hurting. As time passed my funny man died. A new persona took his place. The broken man.

His lover discarded him, leaving him shattered and dazed, trying to understand what he did wrong. Is there such a thing as loving someone too much? The broken man tried not to let that defeat him, but while he saw his actions as strong, I saw them as suppressive. After the funny man died this new broken man tried to contain me in the glass box of time, viewing me as a young innocent. He didn't understand that I was growing up, that I was becoming the person I wanted to be. He didn't like that.

Words hurt: they cut and bruise. After every yelling match I felt as though we walked away wounded and limping back to our sanctuaries of isolation. When the funny man died I realised what silence really was; it's not just lack of sound but lack of life. In that Eden I saw only darkness, I merely existed alongside two other broken souls. When things began to deteriorate and the broken man lashed out, I found solace in suppression. I would put myself in a frame of mind where I was peaceful and nothing could hurt me, where I was reunited with my funny man. This place was transient.

As the hard times became more frequent I found it difficult to hold on to the hope that my funny man might come back. Yelling, crying, loathing were the main acts in my show of misery. How many times I cried, how many times my sobbing was only heard by a pillow, how many times I wished my funny man would come back and I could live as a family instead of two households. Many people told me to walk away from that toxic being, but you never abandon those you love…

I did. I had to. I was pushed too far. I couldn't do it any longer. I left with just a bin bag and a rucksack. The day before my birthday, while he was pre-occupied.

Hurt-filled words were exchanged for a while but as time passed our conversations lessened and I was able to get on with my life, looking forward.

I know the broken man wants me back. He needs his aggression outlet. But I refuse to be his pillow to scream into. I am a person, not his person. I have emotions, ideas and opinions, therefore I refuse to get treated like a possession. I would be lying if I said I was still completely numb. My happiness flickers and I realise how much I miss my funny man, but the most devastating thing about missing that person is the fact that I can no longer remember him. I view photos and see expressions of joy but in my mind I can't see his smile, I no longer hear his laugh or feel the warmth of his hugs. All the things I loved are but a memory that can only be visualised to an extent by a photo.

When I try to picture my funny man all I end up seeing is that broken man, consumed by anger with no realisation of how his actions affect others. He has created a goal he must achieve, but his goal doesn't take into account the fact that he can't control people. Sure, he helped to bring me into this world. But am I not a human before I am a daughter? On those days where I mourn the death of my funny man I just remind myself of the help I offered him, how I held on even though others let go. I remind myself that I tried, and that not all people want to be saved. They only drag you down with them so they don't go alone.

Without the death of the funny man and introduction to the broken man I wouldn't be who I am today. I wouldn't be as resilient or strong. Although I feel as though I've gone through hell and made it to the other side, ignored all the voices telling me I wasn't going to make it and pushed past all the hands forcing me down, I now sit in my happy place in the real world. I breathe and think about all I've conquered and how those lessons will teach me how to deal with all obstacles I am yet to face.

I miss you funny man and always will, but I need to live.