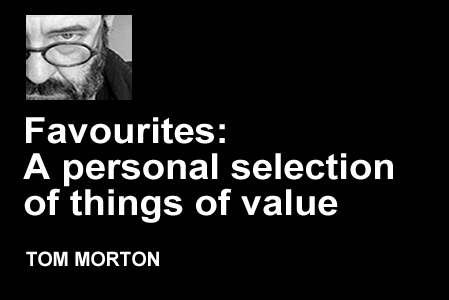 In each edition, a personal selection of things of value: we ask each contributor to nominate their favourite book, film, piece of music, work of art, restaurant or pub, and place. This week: broadcaster Tom Morton

Favourite work of art
Favourite book
People were staring. But in Room 70 of the British Museum, people do stare, though not normally at large, somewhat emotional Scotsmen walking first one way, then the other around a small vase in a (highly reinforced) glass case. When the security staff began to take an interest, I stopped. And stared.

I was emotional because the Portland Vase, despite having been reconstructed following vandalism by a deranged and very, very drunk man called William Lloyd in 1845 is one of the most beautiful objects in the world. And has been for around 2,000 years. It’s a cobalt blue (though to all appearances, it’s black) cameo glass amphora, made in Rome, and shows seven white human figures, two human heads and a snake. Nobody knows quite what they’re supposed to be doing. Something mythical.

Wolf Mankowitz, father of photographer and film-maker Gered, was a renaissance man of the 1950s and 60s: screenwriter ('Expresso Bongo', 'Casino Royale', 'Dr No'), antiques dealer, film and theatre producer, novelist. His story 'A Kid For Two Farthings' was made into a film by Carol Reed and was issued as a paperback along with the novella 'Make Me An Offer'; a volume which made its way into our house and, as a child, my print-stained hands.

I thought 'A Kid for Two Farthings' was sentimental tripe, but I loved Make Me An Offer, the hugely atmospheric tale of a downmarket London antiques dealer obsessed with the Portland Vase and the early, enormously valuable copies made of it by the legendary Josiah Wedgewood. It tells, via a wonderfully comedic depiction of a crooked country house auction, how he...well. You should read it.

I still love this book. I regularly buy second-hand copies for friends. I pore over my rare edition of Mankowitz’s academic monograph for background ('The Portland Vase and the Wedgewood Copies'). The novella is beautifully, laconically written, crackling with atmospheric detail, structured with all the craftsmanship and finesse of Josiah himself . And every time I’m in London I go to the British Museum and I walk around that mysterious, blacker-than-blue, infinitely valuable, infinitely lovely container, first in one direction, then the other. Like every rereading of Mankowitz’s little story, it fills me with joy.

Favourite restaurant/pub
One of the benefits of having a daughter at university in Aberdeen is taking her out to lunch at the wonderful Moonfish Café, which specialises, as suggested by its name, in seafood and is both unpretentious and imaginative, as well as offering remarkable value. It is also near two of my favourite pubs in all Scotland, the whisky-specialising Grill on Union Street and the perfectly proportioned, nook-and-cranny filled secret space that is Under the Hammer beneath Golden Square.

But there are so many other wonderful places to sip and sup. The Barley Bree in Muthill, Perthshire, presented our party of bedraggled motorcyclists, when it was officially closed, with three of the best fine dining courses I’ve ever experienced. Fiddlers in Drumnadrochit not only has one of the best selections of single malts in the world, but serves superb Cullen Skink and has hosts so hospitable they ought to carry some sort of health warning. MacCallum’s Oyster Bar in Troon cooks fish you’ve just seen landed at the pier it’s built on. And there is the wondrous, hidden bar in a certain west coast town, a perfect Orwellian Moon Under Water I stumbled into one Saturday night, where I was immediately buttonholed by a regular and told, in no uncertain terms, that I was welcome but must never reveal in print or on air the pub’s identity or whereabouts. And I never have.

When it comes to food, just 10 miles from our house in Shetland is the fish and chip shop currently voted best in the UK. Frankies’ offers those lucky enough to get a table the possibility of garlic-butter-fried scallops – bigger, tastier and cheaper than any others in Europe. With proper, big, chip shop chips fried in lard. No alcohol with it, just a cup of tea. After I’ve driven home, though, I can walk to the St Magnus Bay Hotel, all Norwegian wood and neighbours, for a pint of West St Mungo, a German lager made in Glasgow. And walk home, not too unsteadily.

Favourite music
So tricky, this. There is recent music that has, for a while, displaced the great vinyl landmarks of my youth – the glorious Unthanks, Arcade Fire, Richard Hawley, even Elbow’s one good album – but I continually find myself burrowing past my 1980s period of professional music writing and the radio DJ years to the records I saved for: Richard and Linda Thompson’s epochal triumph of melancholy and folk melodrama 'I Want to See The Bright Lights Tonight'; Van Morrison’s hypnotic 'Veedon Fleece'. Bruce Springsteen’s 'Darkness on the Edge of Town', Dylan’s 'Blood on the Tracks'.

But one record stands out. Bought from Speed Records on Troon’s Portland Street, a gatefold sleeve and the then-cool Polydor label in red, and the vinyl with faults that made its crackles and jumps part of the music. Rory Gallagher, Live in Europe. An album which conjured up a (for me, deep in the evangelical hinterlands) forbidden world of sweaty continental clubs, screaming electric guitars, lost faith ('I coulda had religion...but my little girl wouldn’t let me pray!') and the wondrous release of loud blues and rock’n’roll. When Rory played the cellar dancehall of the Caledonian Hotel in Ayr I was 16, and too young to go, even if God and my parents had let me. Some of my pals did, though, and it’s one of the greatest regrets of my life that I didn’t make the attempt.

Favourite film
I am outraged – furious, in fact – that an attempt has been made (by Gilles Mackinnon and, of all people, the much-moustchioed Peter Macdougall) to remake Alexander MacKendrick’s film of Compton Mackenzie’s Whisky Galore. Is nothing sacred? This is not just my favourite movie, it is a classic not only of Scottish but of world cinema. MacKendrick’s 'The Maggie' (a take on 'The Vital Spark' and all who sailed in her) and of course his scintillating Hollywood debut 'The Sweet Smell of Success' are superb, but it’s the film known in the USA as 'Tight Little Island' that remains my other favourite.

The 1949 version of 'Whisky Galore' (lest anyone has forgotten: based on the true story of the whisky-laden SS Politician’s grounding and raiding by drink-starved islanders) is a work of dark comedic genius, and the material shot on location on and around Barra is wondrous. Some of it is in Gaelic, and the greatest cinematic experience of my life was watching 'Whisky Galore' with a Gaelic-speaking audience in Ardgour, fuelled by copious amounts of locally-bottled uisge beatha. A double bill with Bill Forsyth’s 'Local Hero' would be perfect. Rabbit stew served at the interval.

Favourite place
That would be Shetland (Fethaland, the Lang Ayre, Eshaness). Or Glasgow (Pollok Estate, the People’s Palace, the Subway). Though I quite like Wick, particularly Pulteneytown. And Kirkwall, which undoubtedly contains my favourite building, St Magnus Cathedral. Wigtown when there isn’t a book festival on. Bowling Basin. Stonehaven swimming pool. Campbeltown’s sheer oddness. And then there’s the fact that oddly enough, many of the most significant events of my young adulthood took place in Prestwick Airport, home of the the Scottish Review, which was a kind of social club for young Ayrshire Plymouth Brethren (the airport café, not the yet-to-be-conceived Scottish Review). Actually, I’ll settle for the Ballast Bank in Troon, looking over to Arran, with the prospect of a meal at MacCallum’s later. Or just say 'Scotland’ and be done with it. With the possible exception of the British Museum’s Room 70.