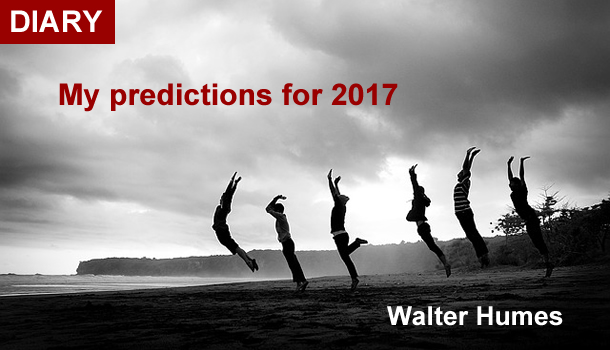 Saturday 24 December
On Christmas Eve, I avoid the recycled festive offerings on television in favour of a profile of the writer Alan Bennett on BBC2. The focus is on Bennett as a diarist as he checks the proofs of his latest volume. Collections of his diary entries have been hugely popular: the most recent can be found in the London Review of Books prior to their publication in book form. Their appeal derives from a number of qualities: the acuteness of his observations; his ear for the peculiarities of language; his sardonic humour; the sharpness of his comments on politics, culture and social trends. He has become something of a national treasure, not least through the adaptation of his plays 'The Madness of George III’, 'The Lady in the Van’ and 'The History Boys’ as highly successful films. For pedants, I should point out that the first of these became 'The Madness of King George’ in the film version.

In some ways, Bennett’s success is rather surprising. Compared with the other members of the original 'Beyond the Fringe’ quartet (Peter Cook, Dudley Moore and Jonathan Miller), which launched the satirical trend of the 1960s, he seemed quiet and self-effacing. Cook was a brilliant writer and performer but was destroyed by his addiction to alcohol. Moore, a talented musician, had a colourful personal life and made it big in Hollywood until a cruel degenerative condition brought that to an end. Miller followed a less glamorous, but highly successful, career as a television presenter and theatre and opera director. He was knighted in 2002. By contrast, Bennett declined recognition in the honours list. His homely, unpretentious manner, with strong roots in his native Yorkshire, gives him popular appeal, though also ensures that he is subject to the same satirical treatment that he metes out to others. Ian Hislop, on 'Have I Got News for You?’, does a good imitation of Bennett’s vocal distinctiveness.

Elevation to the role of a national treasure carries risks. It is only a matter of time before someone tries to question the status. In 2014, Michael Henderson, writing in the Telegraph, stated: 'The truth is that Alan Bennett, superb playwright, outstanding essayist, first-rate wit, famous homosexual, has become a bore.’ I, for one, am happy to be bored by him for many years to come.

Wednesday 28 December
In William Boyd’s novel, 'Sweet Caress’, one of the characters, Greville, propounds the theory that it takes only 'four adjectives to describe absolutely anyone, anyone in the entire world’. He and his niece, Amory, the central figure in the novel, develop this into a parlour game which they indulge in at social events. At an exhibition of Amory’s photographs, for example, visitors are described variously as 'talentless, self-conscious, myopic, stupid’, or 'sex-starved, boring, pompous, frightened’, or 'narcissistic, elegant, moneyed, pretentious’.

It’s a game that could be played in many contexts, though some would call for discretion. I thought of it in relation to a number of my own dubious acquaintances and quickly concluded that it would have to remain a private matter. And there is also the disturbing thought that others could apply it to oneself with unwelcome results. I did, however, identify a need for some 'all-purpose’ adjectives that would cover situations where it proved difficult to sum up certain people in only four words. These would include 'complex’, 'contradictory’, 'challenging’ and 'conflicted’. Put all four together and Greville’s theory begins to look a little shaky.

Friday 30 December
For insincere gushing, the entertainment industry is hard to beat. It can be seen at its most blatant at the various award ceremonies which provide actors and musicians with an opportunity for self-congratulation. To observers, but not to participants, these are embarrassing occasions where 'stars’ display their inflated egos and sycophants tell them how wonderful they are. The red-carpet parade offers a revealing study in absurd fashion, cosmetic surgery and unnatural teeth. To compound the offence, recipients of awards, who might have taken the precaution of preparing a graceful acceptance speech, are often unable to string a few coherent sentences together. Fake emotion comes more naturally to them.

If the over-the-top behaviour was confined to the entertainers and their supporting cast, it wouldn’t be a great source of irritation: after all, we don’t need to watch their antics. But it now occupies a disproportionate amount of time on mainstream news. Take the recent deaths of the singer George Michael and the actors Debbie Reynolds and her daughter Carrie Fisher. These were certainly sad events for their families, friends and fans. But the extended coverage they received, often as lead items on news reports, was entirely inappropriate. I would like to know what justification the editors of these programmes would offer to explain the relegation of really important news – conflict in the Middle East, terrorist attacks in Europe, economic and political developments – to secondary status in their bulletins. Did they think that over the festive season something 'lighter’ was required (the death of celebrities offers an opportunity for glowing tributes from associates)? When news itself becomes a form of entertainment it is failing in its duty to inform, analyse and encourage intelligent reflection on the issues of the day.

Sunday 1 January
In the spirit of the season, I shall offer a few political predictions for 2017. Scottish Labour will suffer massive losses in the forthcoming local government elections. Instead of abandoning the tired rhetoric which it has trotted out for so long, and getting down to the hard work of developing new policies, the party will engage in endless internal wrangling. The Conservatives, under Ruth Davidson, will make significant gains, though the SNP will continue as the dominant force. Nicola Sturgeon’s personal popularity will decline as she adopts an increasingly strident, but not very effective, stance in relation to Brexit. Despite this, the Westminster government will persist in misreading the Scottish political scene and may make a serious mistake, which would give the SNP a reason for triggering a second independence referendum. Whatever the outcome of that – if it happens – the country would continue to be deeply divided and disenchantment with all politicians would remain high, leaving the way open for fringe populist movements.

The mainstream Scottish press will prove inadequate in terms of news reporting, careful analysis and diverse commentary. Economic pressures on newspapers will mean that there will be little in the way of investigative journalism, allowing many public and private bodies in Scotland to escape proper scrutiny. The distorting hand of public relations will gain more power and influence, further compromising notions of truth and justice. Prospects for genuine democratic renewal will be distant: for that to happen would require an intellectual revolution and new individuals and agencies to promote it.

SR Person of the Year
THE RESULTS

The woman who ran towards the fire
LAURIE GAYLE