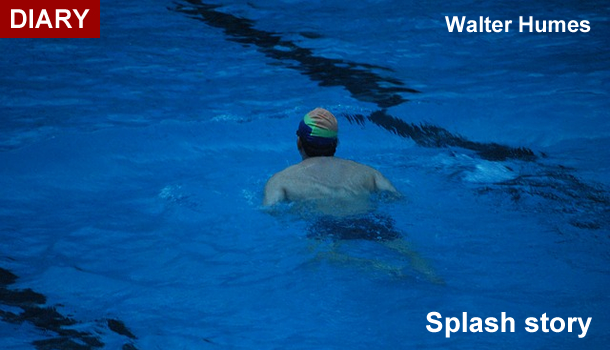 Wednesday 11 January
I attended a small celebration to mark the 80th birthday of one of the regulars at my local swimming pool. The birthday boy, Les, looks at least 10 years younger than his age. Apart from his swimming prowess – his speedy crawl puts many younger swimmers in the shade – he is also an energetic cyclist, still pedalling many miles, not only in Scotland but also overseas. Does he have a secret formula which helps to explain his remarkable achievements? Well, it’s certainly not his diet as he never eats vegetables. And for many years he was a pipe smoker.

Les himself attributes his vigour to his upbringing in Govan. A weekly visit to the local baths ensured that he learned to swim at an early age. He also enjoyed getting away from his urban environment to enjoy the fresh air of the countryside: a bicycle was the easiest and cheapest way of managing this. And, rather modestly, he says that in Govan if you weren’t a good fighter you had to be able to run fast, thus adding another athletic feat to his repertoire.

It was an occasion for reminiscence and even a touch of nostalgia. I shall pass over the confessions by some of those present admitting to youthful indiscretions, in a few cases involving encounters with the over-zealous constabulary of the time. After all, there are not many people who can claim to possess a copy book that is entirely without a blot or two.

Friday 13 January
In his farewell speech as US president, Barack Obama referred to the need to be alert to various threats to democracy: as well as religious extremism and jihadi violence, these included cyber-attacks from hostile nations and the rise of populist movements which thrive on fear.

A few days later, in a debate in the House of Lords on the defence capability of the United Kingdom, Lord Robertson of Port Ellen, former Secretary General of NATO, gave a chilling answer to the question of what was the greatest threat to the safety and security of the nation. He said: ‘We are our own worst enemies. We are short-sighted, penny-pinching, naively optimistic, complacent and ostrich-like to the way in which the world has become interconnected and more fragile, unpredictable and incendiary.’ I am certainly not qualified to pronounce on defence matters but I agree with Lord Robertson that we need to think of upholding democratic values not only in terms of our response to external threats but also in relation to our own internal failures.

These take many forms. Western governments have failed to control the operations of multinational companies, which exert disproportionate – and often undemocratic – influence on economic policies. Similarly, there has been passive acceptance of the activities of some global media companies which have reshaped culture in ways that encourage preoccupation with trivia and discourage citizens from thinking about serious matters.

In Britain, the rich and powerful seem to enjoy a status which allows them not only to avoid paying taxes but also to use the law to ‘manage’ their reputations. One consequence is that public confidence in important institutions is weakened: cynicism about the fairness of ‘democratic’ processes sets in. Furthermore, the growth of public relations has led to the poisoning of civic discourse. Within many organisations, language is no longer used principally as an instrument to inform and explain, but as a means of avoiding questions, misrepresenting facts and discrediting critics. Bureaucratic insiders thus serve to weaken the democratic values they are supposed to be upholding. In considering the fragility of democracy, it is not enough to attribute blame to outside forces. We also need to reflect on how we ourselves have contributed to this situation.

From some perspectives, his work can seem exploitative and voyeuristic, especially when he is filming vulnerable people leading dysfunctional lives. He adopts the role of innocent outsider and is not afraid to ask seemingly naive questions. There is nothing overtly pushy or intrusive about his approach: he just keeps plugging away and is skilled at using silence to convey meaning. For example, in the programme about Fresno, he gained access to a group of methamphetamine users and allowed them to describe their lifestyle. He then asked one of the men whether he was concerned about the effect on his children who witnessed his actions on a daily basis. There was an awkward pause, an expression on the man’s face that suggested it was not something he had even thought about, before he offered a brief, incoherent reply.

Theroux has described his method as presenting himself as something of a nerd adrift in worlds he does not understand. This encourages his subjects to reveal more of themselves than they may have intended. The only trouble is that his reputation and track record is now likely to discourage the cooperation of some of those who are most deserving of scrutiny.

Monday 16 January
A busy week ahead. Today I have to stand in as chair of the local writers’ group as the president has another commitment. On Tuesday and Wednesday I am due to give lectures – the first at Glasgow University and the second at Stirling University, both on educational topics. Later in the week, I will have to devote time to a book I am co-editing as well as to my self-assessment tax return: the latter is never a joy but a fine for late submission would be decidedly unwelcome. I must also find time to watch the highlights of President Trump’s inauguration, which has considerable comic potential, as well as casting a dark cloud over the next four years. Then on Saturday evening I have agreed to give a speech at a 70th birthday party on the theme ‘Growing Old Disgracefully’. A clear case of miscasting, I feel.

I am grateful for the fact that I am still asked to do things but too many engagements in close proximity creates a degree of pressure. I hope I will have the good judgement to recognise when it is time to step back and settle for a life of quiet contemplation. But perhaps not just yet.