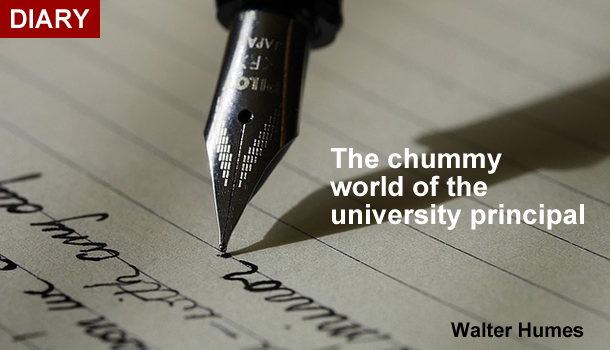 Wednesday 18 January
I see university principals have been getting it in the neck again for their expenses’ claims. It doesn’t look good when people who are on salaries of more than a quarter of a million a year (some over £300,000) submit claims which include the cost of cups of coffee and bottles of water, never mind air travel and luxury hotels. Needless to say, no principal was prepared to explain, never mind defend, the practices, which were revealed following a freedom of information request by a national newspaper. At that level of seniority, responses can easily be delegated to a subordinate.

Principals are also routinely criticised when their annual pay awards are announced. Their average pay increases last year were 3.7% at a time when the salaries of teaching and research staff, some on insecure contracts, were falling in real terms. One indication of growing sensitivity on the subject is that the website of Universities Scotland, the organisation representing the collective interests of principals, now has a section on the remuneration of senior staff, which seeks to forestall criticism. It is claimed that 'Senior pay in higher education has rigorous oversight and transparency'.

Reference is made to the Scottish code of good HE governance and to the requirement that each institution should have an 'independent' remuneration committee. Who serves on this committee? None other than members of the court or governing body, to which it reports back. It all sounds rather chummy, especially when principals themselves can be members of the remuneration committee but cannot be present when their own salaries are being discussed. This arrangement seems to stretch the meaning of 'independent'.

As a footnote, the director of Universities Scotland rejoices in the name Alastair Sim. Whenever he is quoted in the press, there is a brief moment when I think of the wonderful Ealing comedies, often featuring that fine Scottish actor of the same name. Sadly, however, Universities Scotland’s Mr Sim is a former civil servant whose sober demeanour provides no comic relief.

Thursday 19 January
One of the recurring themes of my contributions to SR is the loss of public trust in many of the people occupying leadership roles and the institutions which they represent. The 2017 Edelman Trust barometer confirms my reading of the situation. The survey involved 33,000 people across 28 countries and its findings should be a source of serious concern. It reveals the largest-ever drop in trust not only in business and government, but also in media and non-governmental organisations.

The standing of politicians, chief executives, news editors and even the directors of some charities is in free fall. Nor is it only the general population who hold this view. Although 'informed' members of the public – that is, those who are college-educated and take an interest in news and policy issues – are less sceptical than the general population, they too are losing faith in the system.

The president of Edelman says, 'The implications of the global trust crisis are deep and wide-ranging.' The perception that elites are only out for themselves encourages 'virulent populism and nationalism'. People fall back on personal beliefs since they have no faith in the accuracy or balance of traditional sources of information. The internet allows rumour and conspiracy theories to flourish. And although technical experts continue to be shown more respect than business leaders or government officials, belief systems are increasingly self-referential. The potential for conflict and social unrest is considerable.

There is one element in what is happening that deserves more attention. A strong case can be made for saying that there has been a marked decline in ethical standards at all levels of society, accompanied by a disinclination to pass judgement on conduct that even a generation ago would have been considered reprehensible (look at the massive increase in cases of fraud, for example). This is often concealed behind the setting up of 'ethics committees' within organisations purporting to ensure that things are done properly. Often these have as much credibility as George Orwell’s Ministry of Truth in his novel 'Nineteen Eighty-Four'.

Friday 20 February
The election of Donald Trump as US president can be seen as one manifestation of the 'virulent populism and nationalism' referred to in the Edelman report. In today’s inauguration ceremony, it was given clear expression in Trump’s crude bombastic slogans, signalling a dangerous lack of understanding of the complexities of the modern world. His message, however, clearly appeals to large sections of the American population who have been persuaded by his promise of jobs and economic growth. No doubt some will prosper under his administration, not least the already rich men with whom he has surrounded himself, but it is unlikely the benefits will extend to the poor and the marginalised.

The choreography of the ceremony had its entertaining moments, especially in the informal greetings of old friends and enemies. There was something of a mafia gathering in the atmosphere: behind the smiles, handshakes and pats on the back, one sensed a sinister agenda which will be played out in the weeks and months to come. Old scores will be settled, history rewritten and vendettas pursued.

For me, one other message emerged from the event. Compared with the Trump entourage, the Obamas came across as a class act. Although the former president failed to achieve as much as he had hoped, he and his wife showed a grace, intelligence and sincerity that I fear will be entirely lacking in the new administration.

Saturday 21 January
Jenny Joseph’s poem 'Warning' provokes spontaneous applause when I read it to a group of mature guests at a friend’s 70th birthday party. It is written from the perspective of a woman who is imagining the arbitrary, wilful behaviour that she will be able to indulge in when she is old, but which is not considered appropriate in 'respectable', younger company. She will run her stick along the public railings, pick flowers from other people’s gardens, press alarm bells and gobble up samples in shops.

These actions are contrasted with the constraints of conventional society which attach importance to paying the rent, setting a good example to children, taking an interest in the news and having friends round to dinner. The poem encourages reflection on the tensions between conformity and self-expression and on the liberation which old age – despite its many disadvantages – can give, when the things that seemed so vitally important earlier in life are put into perspective. Its insights clearly resonate with the experience of many of those present.