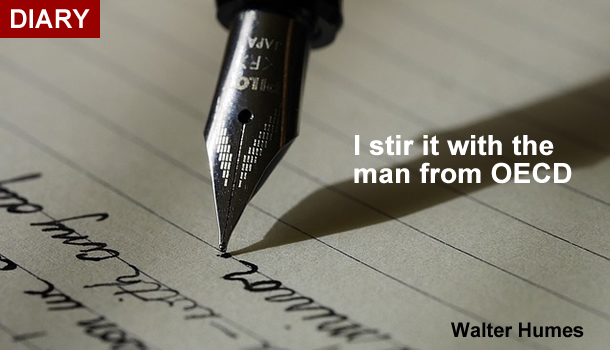 Monday 30 January
I attend the annual Stow lecture at Strathclyde University. David Stow (1793-1864) was an important figure in the history of Scottish education, remembered particularly for his pioneering work in the slums of Glasgow and for his innovative thinking and practice in teacher training. One of my former doctoral students, Glenda White, has developed a website, based on her research, which provides a very informative resource for anyone wanting to find out more about Stow’s life and achievements.

This year’s lecture is given by David Istance, a senior analyst with the Organisation for Economic Cooperation and Development (OECD) based in Paris. He is familiar with the Scottish educational system having been involved in the OECD review of Curriculum for Excellence published in 2015. His principal theme tonight is the need for educational innovation and he offers a concise account of current OECD thinking on learning, leadership and school systems. He refers to various critiques of schooling (economic, social, educational) and the persistence of high levels of underachievement. A number of key principles are identified: learning should be social and collaborative; engagement requires recognition of the emotional dimension of learning; individual differences need to be recognised and respected; the connections between learning activities should be highlighted.

There is an opportunity for questions. I decide to inject a little controversy into the discussion. I suggest that the OECD is one of a number of powerful trans-national organisations, such the International Monetary Fund and the World Bank, which are pushing countries in a particular direction that suits the interests of multinational companies. In the case of education, the current emphasis on skills, flexibility and teamwork is aimed at producing a compliant workforce. Rather provocatively, I say that the influence the OECD has over national educational policies could be regarded as part of 'the dark side of globalisation'. Mr Istance gives a measured answer, acknowledging that reforms can have both positive and negative effects, and stating that the OECD will always look carefully at the evidence. It is a polished performance.

I had hoped to catch the end of the anti-Trump rally in the city centre after the lecture but the timing did not work out. No doubt there will be other opportunities.

Wednesday 1 February
I receive notification from my local authority (East Renfrewshire) of increases in council tax. This comes after several years of a freeze imposed by the Scottish government. From April properties in higher tax bands (E to H) will be subject to increases ranging from 7.5% (band E) to 22.5% (band H). These are substantial jumps but the council would claim they are necessary in order to maintain or restore services after a period of cutbacks and job losses.

I value the services provided by my local authority and, although increases are never welcome, I shall pay the new charges without complaint. The quality of life would be much poorer if we did not have council employees responsible for refuse collection, road repairs, street lighting, leisure facilities and environmental health. Likewise, the availability of good schools and social work support for vulnerable children and adults is an important indicator of a healthy community.

To make these points is not to agree with everything that the council does. I am critical of some of East Renfrewshire’s planning decisions, for example, especially in relation to new housing, and its consultation exercises often seem tokenistic. Again, the salaries of senior officials in local authorities strike me as excessive compared to front-line staff who have day-to-day contact with the public. And the response of councils to complaints is sometimes marked by bureaucratic protectionism rather than the transparency which they claim to represent.

The key issue in relation to council tax is perceived fairness. It is always possible to point out anomalies, such as the widow on a low income who is living in a house with a high tax band. Should she be under pressure to move because she will struggle to pay the increase? Again, what of the family next door, facing the same council tax demand, who have five adults in employment. Wouldn’t a system of local income tax take better account of their ability to pay?

The truth is that no one has yet devised an entirely fair system. There are always relative winners and losers. It is safe to predict that arguments about the best means of financing local services will continue.

I must confess that my own diplomatic credentials are poor. I have a distressing tendency to be direct and forthright in expressing my views. This is not always appreciated, particularly in a world where PR flannel is the default position not only of governments but of many public and private organisations. Over the years, I have learned that irony tends to be more effective than expressions of moral outrage. People in positions of authority don’t like to be made fun of as it disturbs their sense of 'amour-propre'. It is perhaps no accident that many powerful individuals seem to have had a humour bypass early in their careers.

Friday 3 February
The latest reports of attempts to recover pension funds for former BHS employees give an interesting insight into the operations of the British establishment. In October last year, the House of Commons voted unanimously to strip billionaire Philip Green (the businessman blamed for the collapse of the company) of his knighthood. Such a move can only be triggered by the honours forfeiture committee, and it has been decided to postpone any decision until the enquiry into the whole episode has been completed. Some accounts suggest that this could take years and that a behind-the-scenes Whitehall deal has been agreed, which would allow Green and his wife to continue to swan around the Mediterranean in one of their yachts, still entitled to call themselves 'Sir' and 'Lady'.

Time for a popular protest, I think (albeit gestural rather than game-changing). In all references to the Greens, members of the public should refuse to accord them their titles. The policy could usefully be extended to other figures deemed undeserving of their awards. The House of Lords has a number of suitable candidates. Let me suggest two (SR readers will have their own favourites). Jeffrey Archer, the convicted perjurer and popular novelist, is one. Michael Martin, the former speaker of the House of Commons, who sought to obstruct full disclosure of the MPs' expenses scandal, is another. Note the political even-handedness of my examples (one Conservative, one Labour). I try to be socially inclusive.