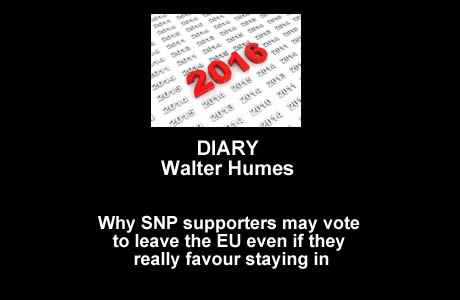 Tuesday 26 January
The forthcoming referendum on Europe is shaping up to become an interesting study in tactical voting. Tony Blair, the former prime minister, has attracted his latest avalanche of abuse by suggesting that a vote to leave Europe would increase the likelihood of Scottish independence. SNP official policy is strongly in support of remaining in the EU but the party’s longer-term ambitions might be aided if a UK majority came out in favour of Brexit: that would strengthen the nationalist argument that a Conservative government in Westminster lacks a democratic mandate in Scotland.

This raises the possibility of some people in Scotland – on both sides of the debate – regarding the referendum as a kind of proxy vote. Those favouring exit from the EU could decide to vote to stay in because they don’t want to boost the likelihood of independence. A more difficult calculation faces those on the other side. The preferred outcome for some nationalists is a pro-Europe vote in Scotland but an anti-Europe vote in the UK as a whole. However, if the overall result looks very tight as polling day approaches, some pro-independence Scots may see a case for voting to leave the EU in order to tilt the balance in the direction of their 'dream’ result. It would involve a calculated risk and could backfire, but for fundamentalists it may be seen as a risk worth taking. The official SNP line will remain pro-Europe but who knows what behind-the-scenes conversations may take place among activists.

Two days after I drafted this item, a former leader of the SNP, Gordon Wilson, made a similar prediction. He warned of the danger of a split between the current leadership and the 'huge hinterland’ of supporters who may want to hasten the pace towards independence and see some advantage in a British exit from Europe.

Wednesday 27 January
Question: When is a 'change of circumstances’ not really a change of circumstances?
Answer: When you are dealing with the Department for Work and Pensions (DWP).
Following my latest encounter with the DWP (reported in an earlier SR diary), I was advised that a minor change to my address might prevent the recurring problem: for the third year in succession I have had to appeal against the department’s initial decision on my winter fuel payment, each time successfully. I phoned the number I was given by the Complaints and Enquiries Review Team (wisely they don’t use the acronym CERT) and spoke to a pleasant woman with a Scottish accent.

I explained the background and was at pains to emphasise that nothing had changed in my situation. I had not moved house, or acquired a lodger, or transferred my finances to offshore accounts: it was purely a technical matter relating to the way my address was listed on the DWP database. A week or so later I received a letter which thanked me for 'telling us that your circumstances have changed’.

The letter continued in Kafkaesque form, 'We describe many things as a change of circumstances’. Clearly this extends to things that are manifestly not a change of circumstances. You would have thought it should not be beyond the wit of someone in the DWP to find a more suitable phrase, such as 'Thank you for updating your information’, but that might have involved departing from the bank of standard letters which staff are doubtless required to use. Heaven forfend that anyone should show evidence of initiative.

I blame the man in charge, Iain Duncan Smith. He was born in Edinburgh which perhaps explains why I always think of him as Lord Snooty, a character readers may recall from the Beano. In the capital, middle-class children always run the risk of being infected with the general atmosphere of snootiness. Of more immediate concern, however, is the fact that IDS does not run a very efficient department, with the Court of Appeal recently ruling against the DWP in the cases of two vulnerable individuals who challenged the bedroom tax rules. In fact, if my own experience on a much less important matter is at all typical, it would not be unfair to conclude that Lord Snooty can’t tell his airs from his graces.

Thursday 28 January
It is always a pleasure to hear an interview in which the interviewee gives straight answers and provides clear information which may be useful to listeners. That was the case in this morning’s Today programme on Radio 4 when Dr Steven Jones of Manchester University was asked about his research on the personal statements which students have to include in their applications for a university place. These statements can make the difference between acceptance and rejection. Dr Jones had found that the well-intentioned advice given by teachers did not always accord with what university admissions tutors were looking for. My own experience confirms that many personal statements are formulaic, lacking any sense of individuality and containing predictable attempts by applicants to ‘sell’ themselves. The same words and phrases appear again and again: 'positive’, 'enthusiastic’, 'enjoy a challenge’, ‘a team player’. Quite often, they come across as simply boastful, which may not be a fair reflection of the applicant’s personality.

What is needed, suggests Dr Jones, is more evidence of engagement with the demands of academic courses, such as reflections on relevant reading. He also draws attention to class differences. First generation university students cannot draw on the 'social capital’ of their more advantaged peers, whose parents know how to navigate the admissions system. One practical way of trying to create a more even playing field is for the application form to contain 'prompts’ about what to include in a personal statement: at present that section simply offers a blank space. Parents, teachers and students who heard the item could follow up the recommendations by looking at Dr Jones’s full report which is available on the website of the Sutton Trust, a think-tank designed to improve social mobility through education.

Saturday 30 January
I am one of a diminishing number of people who have so far resisted the appeal of subscription television services, such as Sky or Virgin. Although the range and quality of programmes on mainstream and 'freeview’ channels do not always please me, I remain reluctant to encourage global media companies, such as the Murdoch empire, which exercise far too much power. I know it is a small and ineffective gesture, but I would feel uncomfortable if I simply rolled over in the manner of politicians. The downside is that my access to sports coverage is greatly reduced, as the buying power of commercial companies has made it impossible for the BBC to win the big contracts. I am not a football fan so that does concern me unduly. While I can admire the skills of top players, the crude tribalism of many fans repels me: as for the antics of managers and club owners, am I alone in thinking that many of them are in need of psychological help?

The reduced diet of sport on mainstream channels has been particularly evident in recent weeks, when substantial amounts of time have been given over to bowls, snooker and darts. No doubt these activities give pleasure to many people, but they have limited spectator appeal unless you lead a very quiet life or are looking for an alternative to prescription drugs. Fortunately, there is still some coverage of the sports I like to watch – athletics, swimming, triathlon and golf. I think I can survive without the services of Rupert Murdoch or Richard Branson for a while longer.