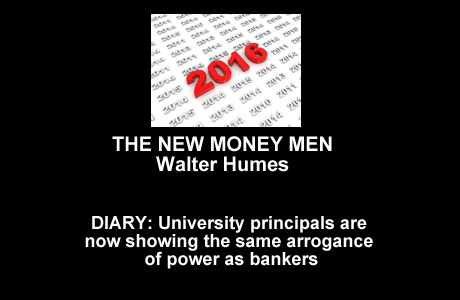 Tuesday 9 February
This turns out to be a day in which I receive a refresher course in coping with a series of minor irritations. It starts badly when I cannot find my house keys. Is this evidence of a decline into confused old age? I have spares, of course, and am obliged to settle for them as I have to go out. Although I know it is unlikely, the unsettling thought that someone could gain access during my absence niggles away at my consciousness.

I take my car to the garage to have a lighting problem checked. My lights function but the control switch has an intermittent fault. I have arranged to wait and settle in the customers’ lounge with reading material and a hot drink. An hour or so later I am informed that the car is ready and that it has been given an overall 'health check’ and a much-needed wash. It soon becomes clear, however, that the original problem has not been sorted. I cannot wait, however, as I have another appointment.

I drive to a suburban railway station and take the train into the city centre, hoping for a few moments of calm. All is peaceful until there is an invasion of noisy pupils from a large secondary school. I am ashamed to admit that I put on a Victor Meldrew expression which serves to discourage them from sitting next to me.

Another frisson of annoyance is provoked when I discover that the venue for my meeting has been changed from the café I had recommended to one next door. This turns out to have loud music and lacks the rather splendid cakes to which I had been looking forward. To make matters worse, when my tea arrives it is not what I had ordered. I only just manage to avoid saying: 'I don't believe it’.

When I get home, I find an email from the garage giving me a 'reassuring’ report on my car: it contains a video clip of the vehicle from a variety of angles. All very impressive, but I will still have to take it in again for further investigation. On the plus side, an extensive search enables me to find the missing keys.

Next morning, I awake to a bright crisp day of the kind I particularly enjoy. All the irritations of yesterday are immediately put in perspective. I don’t even have to tell myself, 'Get a grip, Humes’, the usual verbal rebuke I utter when my grumpy old man tendencies are in danger of surfacing.

Wednesday 10 February
The latest round of increases in the salaries of university principals is reported. Each year this produces a familiar pattern of responses. No individual principal deigns to defend, far less justify, the increases, which in one case (Sir Peter Downes of Dundee University) amounted to 15%, giving a total salary of £271,000, still well short of the highest (Sir Jim McDonald of Strathclyde at £343,000). That task is left to a spokesman from Universities Scotland, the body which represents the collective interests of all university leaders. Principals themselves appear to feel no sense of embarrassment, just as they are unmoved by reports about extravagance in expenses’ claims (first-class air travel, luxury hotels, refurbishment of official residences) and, in a few cases, allegations of cronyism. It is not only among bankers and politicians that the arrogance of power can be detected.

The reactions by academic staff and students also follow a familiar pattern. The University and College Union (UCU) regularly condemns the disparity between the increases awarded to institutional leaders and teaching and research staff, and complains about the lack of transparency in the process. Students too express dismay at these increases (well above the rate of inflation) being awarded at a time when the higher education sector is affected by wider constraints on public spending. In its leader on the subject, the Herald poses the question: 'How much longer can universities ignore the basic principle of fairness that the pay rises of those at the top should reflect the pay rises given to those at the bottom?’.

Judging by the record of recent years, a cynical answer to that question would be 'Indefinitely’. The corporate culture which now dominates the university sector appears to have no problems with double standards. For at least a decade, there has been a deep divide between senior managers and front-line academic staff who carry out the teaching and research which is at the heart of higher education. For evidence of this, it is only necessary to cite the results of the latest Times Higher Education Workplace Survey. In response to the statement: 'The leadership of my university is performing well’, nearly 60% of academic staff either disagreed or disagreed strongly. Despite this, it is safe to predict that the gravy train will continue.

Friday 12 February
Walk down the main street of any Scottish town and you are likely to encounter several folk with obvious health problems: men and women, some depressingly young, who are seriously overweight; people with mobility issues of various kinds; ravaged faces which suggest addiction to drink or drugs; smokers with chronic coughs. It is not surprising, therefore, that the latest review of the nation’s health paints a gloomy picture. Although life expectancy has been rising, it still compares unfavourably with other countries in Europe. And, within Scotland, there are vast disparities between advantaged and disadvantaged communities (Bearsden residents live much longer than those in Shettleston).

The review recommends a national health strategy, which should include better coordination between the various agencies and professionals with responsibilities in this area. But improved bureaucratic structures and channels of communication are only part of the answer – and not necessarily the most important part. What is also needed is much deeper analysis of the root causes of our disappointing record of achievement. Considerable efforts have been devoted to health education programmes in schools and communities, often backed by expensive advertising campaigns on television. Most children and adults are well aware that excessive eating, smoking and drinking, compounded by a lack of exercise, will lead to ill-health. All this has had a limited impact.

It is inadequate to attribute the blame solely to individuals who make 'poor lifestyle choices’. The underlying causes are likely to be complex and involve a combination of factors: social deprivation, particularly during childhood; mental health problems which impact on physical health; the vast array of unhealthy products made available by the food industry; a culture in which cooking has become a performance by celebrity chefs rather than an enjoyable family experience; social fragmentation which causes many people to eat alone, relying on fast food and takeaways. An effective national health strategy will call for hard thinking, not just the usual official response to unwelcome reports – some form of organisational restructuring.

Saturday 13 February
Earlier this week the Labour MSP, Neil Findlay, got himself into a spot of bother when he called the first minister a 'liar’. This was regarded as 'unparliamentary language’. Findlay eventually retracted the word but refused to apologise. He has been warned by the presiding officer that any repetition of the offence will be referred to the standards, procedures and public appointments committee.

The concept of unparliamentary language is rather interesting. It could be seen as just another layer of protection for those who are already privileged, preventing them from being subject to robust exchanges of the kind ordinary citizens often have to encounter. But it might be defended on the grounds that parliament should be an arena for serious debate in which personal abuse should not feature. There are, however, variations between countries. In Belgium, there is no such thing as unparliamentary language, the justification being that in a democracy politicians have a constitutional right to speak freely in parliament. There are also national differences in what is regarded as unacceptable. 'Hypocrite’, 'rat’ and 'scumbag’ are widely condemned. In the Republic of Ireland, 'chancer’, 'corner boy’ and 'guttersnipe’ have been ruled out of order.

'Blackguard’, 'pipsqueak’ and 'hooligan’ have received the red card at Westminster. Perhaps unsurprisingly, Australia has an extensive list of words considered highly offensive. In Canada, the newly-elected prime minister, Justin Trudeau, was once reprimanded for calling another member 'a piece of shit’.

MPs with a good command of language can usually find ways of getting their message across without straying into dangerous territory. Thus 'tired and emotional’, meaning drunk, and ‘economical with the truth’, meaning lying, have escaped censure. And when the veteran Labour MP Dennis Skinner was pulled up for saying that 'half of the Tory party are crooks’, he replied, 'all right then...half of the Tory party are not crooks’. Wit and linguistic subtlety are more effective than a verbal sledgehammer.