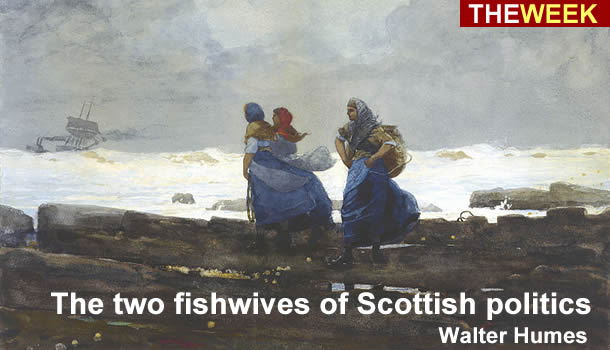 Thursday 18 May
There is a limit to what the human spirit can bear so I knew I would not be able to sit through the full two hours of the ITV election programme featuring party leaders (albeit minus the two principals). The part I saw turned out to be an interesting exercise in gender dynamics, with three strong women (Nicola Sturgeon of the SNP, Leanne Wood of Plaid Cymru and Caroline Lucas of the Greens) dominating the two men on the panel (Tim Farron of the Liberal Democrats and Paul Nuttall of UKIP). Nuttall, in particular, came in for a fair amount of handbagging, a response encouraged by his confused stance on some issues.

I began to regret the decision of Theresa May and Jeremy Corbyn not to take part. The prime minister presumably did not want to expose herself to a collective attack on the day her party manifesto was launched, with its controversial policies on social care. But, rather to my surprise, it was Mr Corbyn I missed most. Despite all the abuse heaped on him, he seems to have been enjoying the campaign. His messianic zeal, with his vision of a socialist utopia, in which wealth would be redistributed and social justice would prevail, might have brought a touch of passion to an otherwise dull affair. He could even have managed to rouse a rather subdued audience.
After an hour, I had had enough and turned my attention to John le Carré's fascinating reminiscences in 'The Pigeon Tunnel'.

Friday 19 May
It is reported that Donald Trump, in his latest unpresidential utterance, described the former FBI director, James Comey, as a 'nut job' during a meeting with Russian officials. According to an account in the New York Times, not disputed by the White House, his exact words were: 'I just fired the head of the FBI. He was crazy, a real nut job.'

Leaving aside the rich irony of Trump feeling qualified to pass judgement on the mental stability of others, what does this choice of language reveal about the standard of political discourse in the United States? Trump has form when it comes to employing insults and abuse directed at those who dare to challenge his narcissistic view of the world. A scrutiny of his posts on Twitter reveals that he has frequently used terms such as 'loser' (72 times), 'crazy' (65) and 'dumb' (95). 'Wacko' and 'basket case' are also among his favourites.

A charitable interpretation of this pattern might be that Trump is somewhat linguistically challenged, with a limited vocabulary, intolerant of alternative perspectives and lacking in emotional control. A less charitable reading would be to see this as further evidence that he himself is simply 'bonkers' (a term that, as far as I am aware, he has not so far invoked). But that would be to trivialise the issue. At a time when efforts are being made to take mental illness more seriously, and encourage greater understanding of those who suffer from its various manifestations, for a leading politician to bandy around disparaging terms in this manner shows astonishing ignorance. But we should not be surprised. Trump's track record as a crude vulgarian is there for all to see.

Saturday 20 May
All professions (medical, scientific, legal, theological, academic) employ their own specialist language. Becoming a member of a particular profession partly involves learning the meaning and appropriate application of that language. This process can, however, be taken too far so that unnecessary jargon is used where simple terms would suffice. Linguistic pretension can also serve as an exclusionary device, designed to reinforce the status of the professional and keep the lay person at a distance.

The legal profession probably has the worst reputation in this respect. Many legal documents are written in a form that could easily be made more accessible, but for some (not all) lawyers that might have the unwelcome effect of demystifying the process. A recent report by the Scottish Civil Justice Council is, therefore, to be welcomed, especially as it is written in a straightforward style. It is the first stage of a review of civil procedure rules and both lawyers and members of the public are invited to express their views on what is proposed. In his foreword to the report, Lord Carloway, Lord President of the Court of Session, states: 'The task is an ambitious but a necessary one: to build a civil justice system which makes more sense to someone born at the turn of the millennium than to someone born in the previous two centuries.' The aim is to simplify and streamline the rules relating to civil actions.

I do have one reservation about the consultation process. It is proposed that it will take place over the summer (when many people are on holiday). There are to be visits to the six court areas of Scotland which 'will include presentations, discussion and listening exercises'. I hope this will not prove similar to the tactical release of unwelcome news by politicians at a time when it will receive limited attention.

Sunday 21 May
I am a glutton for punishment. Here I am watching another election debate, this time involving the leaders of the parties in Scotland. It is not so much a gladiatorial contest as a back-street punch-up. In the early stages, Ruth Davidson is the victim, with all the others taking her to task on Tory migration policies. The personal animosity between Ms Davidson and Nicola Sturgeon is palpable. Several times they try to talk across each other in the unprepossessing style of a pair of fishwives. To her supporters, the first minister's tendency to interrupt other panellists is no doubt seen as confident assertion: to critics, it comes across as offensive rudeness.

The dynamics change when the discussion turns to education and the health service. These are devolved matters so not strictly relevant to a UK election, but they are clearly what the audience wishes to talk about. Kezia Dugdale, in a terrier-like attack, succeeds in roughing up the first minister, who begins to look decidedly uncomfortable. Willie Rennie of the Lib Dems and Patrick Harvie of the Greens make reasonable contributions but fail to land a killer blow. Unintended comic relief is provided by David Coburn of UKIP.

The real 'winners' of the debate are three members of the audience who introduce some genuine feeling, based on personal experience, into the proceedings. A teacher highlights poor standards of literacy in primary schools. A nurse launches a stinging verbal assault on Nicola Sturgeon over salaries and unfilled posts. And a young man with Asperger's syndrome and mental health issues recounts his demoralising experience of the benefits system. All receive prolonged applause.

Afterwards, the cream of the Scottish press, many busy writing their columns for the following day, are asked for their verdicts. These predictably follow the editorial inclinations of the papers they represent. Brian Taylor, BBC Scotland's chief political editor, is sporting a dazzling pair of braces, which distract attention from anything he is saying. One journalist, invited to assess whether we have learned anything new from the evening's exchanges, after a long pause says 'No', to general laughter.