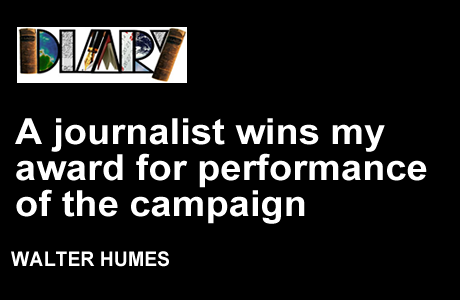 Wednesday 4 May
I receive a visit from the police (not before time, do I hear you say?). It concerns an elderly man in the neighbourhood who suffers from a form of dementia. He lives alone and for some time has managed to function at a basic level. His condition, however, has been deteriorating and there have been two recent incidents giving cause for concern. In the first, an ambulance was called but the man refused to go to hospital. The latest episode involved a couple finding him in the street in a confused state and bringing him home. When the police arrived, he gave a fairly coherent account of himself and they did not feel they had sufficient grounds for intervention.

I was able to supply some information about the man’s background. An older brother, who had previously provided good support, died a couple of years ago. The only other close relative lives some distance away. At one stage, carers had visited the man daily but he was not cooperative and eventually that arrangement ceased. He is not aggressive or unpleasant, just fiercely independent.

It seems that everyone is waiting for a crisis that would provide a reason for official action. The police will make a report and alert social work. Neighbours will keep an eye open for any further decline. The man will continue to defend his freedom as long as he can. I try to imagine how I would feel in his situation, but it is an imaginative leap too far. Up and down the country there must be thousands of similar scenarios being enacted every day.

Friday 6 May
When I was young, I held a view of politics that I now regard as decidedly naïve. I imagined it was about values and principles, and competing visions of the good society. Today I think of it as a spectacle, a performance, a theatre of the absurd. Style is more important than substance. We are presented with alternative productions, but they all use similar techniques to disguise the various forms of self-interest that lie behind them: false promises; distorted language; media manipulation.

As I watched the results of the Scottish election unfolding, I resolved to treat the occasion as a show rather than an event which might shape the future of the nation. Real power now lies not with ordinary politicians but with multinational corporations, global financiers and ruthless dictators. Thus I viewed the proceedings as a sort of second-rate sitcom, an entertainment provided by C-list actors. The glum faces of Iain Gray and Johann Lamont, both former leaders of the Scottish Labour party, contrasted with the irrepressible ebullience of Willie Rennie and the jaw-dislocating smile of Ruth Davidson. In my own constituency of Eastwood, the victor, Jackson Carlaw (Conservative), looked fresh and upbeat compared with a tired and dispirited Ken Macintosh (Labour), who had held the seat since 1999.

I decided to award my own version of a BAFTA for the most outstanding performance of the whole campaign. Rather to my surprise, my thoughts turned not to a politician – their scripts are so predictable and their attempts at humour ponderous – but to a journalist. For his polished and witty pre-election reports and post-election analyses, my nomination goes to Bernard Ponsonby, the long-serving political editor of STV. Working with thin material, he did rather a fine job – and, as befitted the event, he treated it as a piece of theatre.

Saturday 7 May
All of the main parties in the Scottish election placed education high on their policy agenda. In the case of the SNP, one of its manifesto commitments was this: 'We will give more power and resources direct to schools to put teachers, parents and communities in the driving seat of school improvements'. What this will mean in practice has yet to be spelled out. Rather ironically, the promise comes at a time when the UK government has just retreated from plans to turn all state schools in England into academies, free of local authority control.

I speak to a number of Scottish head teachers and many of them are certainly frustrated by the constraints of their role. It is made very plain to them that their first loyalty is not to the children, the staff or the parents but to the bureaucratic systems and line management hierarchy of the local authority. They are, above all, 'officers of the council’. If they show any inclination to step out of line, they may find themselves subject to disciplinary proceedings. One secondary head teacher I know eventually left Scotland to work in England where he felt he would have greater freedom to adopt innovative approaches.

To be fair to Scottish councils, the budgets which have been imposed upon them by central government mean that they have limited room for manoeuvre. Support services to schools have had to be cut. Where they exist, they take the form of helping schools to prepare for inspections, rather than stimulating new ideas. In many authorities the former 'adviser’ posts have been replaced by 'quality improvement officers’, clearly signalling that 'school improvement’ (usually defined narrowly in terms of exam passes) is what matters. Old-style directors of education, with a strong track record of 'hands-on’ experience, are becoming rarer, with many senior posts now occupied by people of varied career paths and responsible for multi-service remits. Against this background, it is hardly surprising that education officials in local government are not noted for putting forward stimulating proposals for educational reform. They see their role as essentially administrative, keeping the system running and trying to respond to central government directives.

Head teachers are likely to welcome the SNP’s intention to give them more power. But the details need to be fleshed out. How extensive would the powers be? Would they cover staffing, the curriculum, maintenance of the school fabric? What input would parents have that differs from existing arrangements? And what would be the continuing role, if any, of the local authority in the provision of educational services? If persuasive answers can be given to these questions, the present difficulty of attracting teaching staff to apply for many head teacher posts might be mitigated.

Monday 9 May
Reports of diverse forms of corruption have become depressingly familiar – in sport, banking, business and politics. It is a global problem and various organisations try to monitor its scale and nature. Transparency International, for example, publishes an index of perceived corruption in the public sector of different countries. Denmark, Finland and Sweden emerge as the least corrupt while Somalia, North Korea and Afghanistan are rated the most corrupt. The United Kingdom scores reasonably well, coming tenth out of a total of 167 countries. But the report suggests that many relatively 'clean’ nations at home are quite prepared to engage in dubious activities abroad. In other words, they manage to export their corruption. Another campaigning group, One, has estimated that a trillion dollars every year are siphoned away from the world’s poorest countries by corrupt practices.

This week David Cameron hosts an anti-corruption conference in London. The venue is significant because there have been allegations that the capital has become a major outlet for money laundering. Some of the most expensive properties are owned by overseas ‘investors’ who rarely visit Britain. By forcing average prices up, this contributes to London’s acute housing crisis, perhaps the most pressing problem facing the newly-elected mayor, Sadiq Khan. In advance of the conference, a group of activists wrote to the prime minister proposing a series of measures designed to close loopholes. These include open contracting processes, tighter rules for banks, public access to government budgets and tax payments by companies. Clearly the release of the Panama papers has caused some embarrassment. But is there enough political will to introduce effective measures?

Delegates at the conference would do well to recall the warning given by the American capitalist, Nick Hanauer, who in 2014 admitted that he had been 'rewarded obscenely’ for his own business success. He had a message for the super-rich, driven by insatiable greed and indifferent to the gap between their lifestyles and those of ordinary citizens who work hard and pay their taxes. He wrote: 'If we don’t do something to fix the glaring inequities... the pitchforks are going to come for us. No society can sustain this kind of rising inequality. You show me a highly unequal society, and I will show you a police state. Or an uprising. There are no counter-examples.