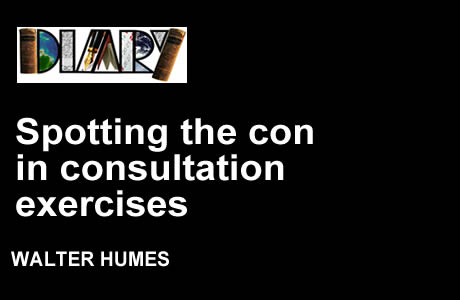 Wednesday 1 June
As someone who dabbles on the fringes of journalism, I occasionally have ethical qualms about what I write. I don't worry too much about criticising public figures because they are generally well placed to defend themselves and usually have more effective means at their disposal than I do. When I draw on encounters with people who are not in the public eye, however, I sometimes check with them that they are happy for me to refer to the episode, without giving them any control over the form of words I use. The final responsibility for what appears is mine (subject only to any concerns which the editor might raise).

There are subtler ethical issues that can arise. How legitimate is it, for example, to embellish or re-structure a story in order to make it more interesting or entertaining? At what point does my desire to play up a minor detail for dramatic purposes, or use a striking phrase for effect, run the risk of misrepresenting what actually happened? Most of my material is light and ephemeral so I am not exactly paralysed by these concerns, but they do surface from time to time.

Nevertheless, I was rather taken aback when I came across a reference to the controversial American writer Janet Malcolm. In a book published in 1990 she wrote: 'Every journalist who is not too stupid or too full of himself to notice what is going on knows that what he does is morally indefensible. He is a kind of confidence man, preying on people’s vanity, ignorance or loneliness, gaining their trust and betraying them without remorse'.

It is not hard to think of examples of the kind of exploitative journalism to which Malcolm is referring: phone hacking; insensitive door-stepping of the bereaved; unkind treatment of the foolish or vulnerable. Equally, however, it is possible to think of cases where issues of public interest have only been raised thanks to the persistence and courage of investigative reporters, often in the face of attempts to thwart or silence them.

Where Malcolm does have a valid point is that while journalists can move on after they have pursued a story, those whose lives have been irrevocably changed have to find ways of picking up the pieces. For the newspaper or television reporter there is always another event demanding their attention: some become adrenalin junkies, constantly seeking the next disaster (whether economic, political, social or personal) and untroubled about whether they have to bend the rules to secure a headline or leave casualties in their wake. I am glad I don’t occupy the uncertain moral landscape of serious journalism. There’s a lot to be said for remaining on the fringes.

Thursday 2 June
A sports commentator on the Today programme on Radio 4 states that there is now so much money to be made from the English premier league that football clubs are no longer purchased as 'trophies’ or 'vanity projects’ by the super-rich but as sound business investments. The remark made me think of other ways in which multi-millionaires proclaim their success to the world: expensive cars with personalised number plates; yachts and private jets; country estates and luxury apartments; much younger partners who just happen to be blessed with good looks. It is true that some also make substantial contributions to worthwhile charities and social projects, but few do so without accompanying publicity. The need for recognition, for public visibility, is a common feature of the vastly wealthy.

Many people are impressed by all this and envy the achievements of those on the rich list, even if the source of some of the money does not bear close inspection (e.g. goods produced by cheap labour in poor parts of the world). There is, moreover, never any shortage of followers who are prepared to flatter inflated egos and occupy subordinate roles in the retinue which invariably accompanies the super-rich. It never crosses their mind that there is something rather vulgar and tasteless about the whole ostentatious display.

The psychology of those who seem to have an insatiable need to acquire 'trophies’ to demonstrate their wealth and reinforce their 'vanity’ would make an interesting study. Do they ever reflect that, to many observers, they seem unattractively boastful and needy, constantly seeking confirmation that they really have made it to the top of the financial tree? But I suppose any such thought would be quickly dismissed as mere jealousy on the part of 'losers’. The rich and powerful are well practised in reassuring themselves that they really do deserve what they have achieved.

Friday 3 June
Despite the fact that I have been retired for a few years, I continue to receive email invitations to sign up for management courses of various kinds. I am tempted to suggest that the organisers of these events should themselves take a course on maintaining up-to-date address lists for potential delegates. In my experience, however, people who bang on endlessly about management, and inflict their threadbare ideas on others, have a distinctly underdeveloped sense of humour.

The latest batch of tedious offerings made me think that there might be scope in the market for an Alternative Management Academy (AMA), a subversive rival to the Master of Business Administration (MBA). Among the courses to which I would happily contribute would be 'Whistleblowing for beginners’, 'Spotting the con in consultation exercises’ and 'Cutting through the flannel in public relations’.

With regard to the last of these, it is one of the more depressing aspects of the current scene that many young people seem to think that the field of public relations represents a worthwhile career option. What job satisfaction they hope to gain from drafting uninformative press releases, putting a positive spin on some corporate cock-up, or covering the back of a government minister, I cannot imagine. The language of public relations would, however, provide a rich source of material, with its meaningless jargon, shabby evasions and semi-literate constructions. Any takers?

Sunday 5 June
This week I received a visit from Jehovah’s Witnesses – two charming women who presented me with a copy of their magazine, Awake. I received them courteously and for a few minutes I think they hoped that they might recruit me to their ranks. This was because I mentioned the fact that I am a regular listener to the early morning radio programme 'Sunday’, which reports on a wide range of religious stories. However, their optimism was extinguished when I told them that the programme had once invited listeners to submit limericks on a religious theme. I was able to recall my own entry, which was subsequently read out on the programme:

After the women had departed, I remembered another encounter with evangelists. On that occasion, I admit I behaved badly. In mitigation, I would point out that it had been a difficult day and I had arrived home tired and hungry. Soon afterwards, there was a knock at the door. Two clean-cut young Americans introduced themselves. One asked; 'May we have a moment of your time?’ I responded, 'No you may not,’ and started to shut the door. As I did so, the second Mormon rebuked me by saying, 'You are closing your door on God'. I looked him up and down, and replied, 'My, you’ve had a rapid rise in the organisation'. That terminated the exchange.

I am not hostile to religion. On the contrary, I think the religious impulse in human history has inspired many of the greatest achievements in literature, art and music and testifies to the importance of a spiritual dimension to life. What I object to is the dogmatic certainty of some faith traditions, their intolerance of other interpretations and their attempt to impose strict conformity on adherents. They claim to offer 'salvation’ but too often it depends on the suppression of intellect and a disregard for the questionable motives of some religious leaders.

GERRY HASSAN
Essay
Nine years into office, what does the SNP actually stand for?

GEORGE ROBERTSON
Favourites
A personal selection of things of value

ISLAY McLEOD
Society
Will we ever stop chasing the next fix?

ANDREW HOOK
Society
Anti-Semitisn in fiction and in fact