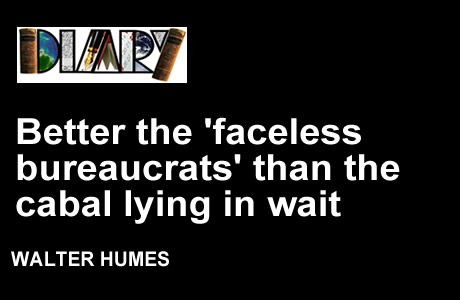 Tuesday 14 June
'I used to watch Question Time but I stopped because I wanted to smash the telly.’ This remark was made by an interviewee on being asked about his sources of information about the EU referendum. His feelings were echoed by other respondents on the same radio programme, who expressed a total lack of trust in politicians on both sides of the debate. There have been increasingly bitter accusations and counter-accusations about misleading statistics on the economy and immigration. The Remain camp, it is said, has sought to present an apocalyptic vision of the consequences of exit, while the proponents of Leave have been charged with failing to answer questions about the practicalities of disengaging from European institutions.

Unlikely alliances have sprung up, confusing the political landscape: George Osborne and Alistair (now Lord) Darling supporting continuing EU membership; Jim Sillars and Brian Monteith in favour of Brexit. Whatever the outcome, it will not be easy to move on from the damage that has been done – to personal relationships, to institutional reputations and to the whole political process.

One particular aspect of the Leave campaign has not received the attention it deserves. It has been presented as an attempt to restore democracy by regaining control over decision-making and striking a blow for the general public over faceless bureaucrats. Who are the leaders advancing this argument? Nigel Farage, Boris Johnson and Iain Duncan Smith are hardly credible as spokesmen for democracy. All three have been highly privileged by birth, education and financial security. Their political records reveal that their instinctive alliances are to the far right of politics. Farage, in particular, is a master of crude populism, seemingly offering simple solutions to complex problems. His claim to represent ordinary citizens should be treated with a large of measure of scepticism. For once, I find myself agreeing with Nicola Sturgeon. If the Leave side wins, as seems quite possible, we can look forward to the assumption of power by a dangerously undemocratic cabal.

Thursday 16 June
The appearance of Sir Philip Green, former head of the retail chain BHS, before a House of Commons joint select committee had all the atmosphere of a courtroom drama. The MPs took on the role of prosecuting counsel, keen to deliver a knockout blow, while Sir Philip in the witness box sought to fend off damage by ducking and diving. He was attempting to defend his role in the collapse of BHS after he sold it for £1 to the former bankrupt Dominic Chappell, who had no previous retail experience. So entranced was the Times newspaper by Sir Philip’s performance that, in addition to a news report (complete with unflattering pictures of Sir Philip’s facial expressions), it devoted both a comment piece and a leader to the occasion.

During the exchanges, Sir Philip was accused of having 'a dominant personality’ and 'extremely thin skin’. He certainly came across as someone who was more used to issuing orders than to answering questions. He complained about being bullied and took offence when he felt a member of the committee was staring at him in a hostile way. It was a remarkable insight into the psychology of 'this supertanned titan of industry’ (as one of the Times pieces called him). The leading article was sharply critical of his performance, describing his account as 'woeful’ and suggesting that he represents 'the ugly face of capitalism’.

It is estimated that Sir Philip’s family fortune amounts to some £3.2 billion. At one point during the hearing, he remarked: 'Envy and jealousy are incurable diseases'. Someone should have asked him: 'Is the same true of greed?’

Friday 17 June
I have sometimes been present at lectures by distinguished speakers who turned out to be disappointing. They may have published important books but lacked the style and authority to engage and sustain the interest of an audience. That was far from the case with the event I attended last night. Some 200 people turned up at the rather splendid Technology and Innovation Centre in Strathclyde University to hear Professor Michael Apple speak on the subject, 'Are current educational reforms really democratic?’

Professor Apple is based at the University of Wisconsin-Madison but is internationally renowned for his work on the relation between education and power. In the American context, he is seen by Republicans as a dangerous radical: for others, his ideas are a breath of fresh air and a challenge to action.

He presented a compelling case, informed both by theoretical insights and practical examples, showing how the political right has sought to control educational policies and shape them towards their own ends. Education, he argued, is a site of conflict and inescapably political. A dangerous alliance of neoliberals, neoconservatives and authoritarian populists has sought to change 'common sense’ about the function and priorities of schooling. They do this through a dishonest rhetoric of competition, choice and autonomy.

Many professionals have bought into the reform programme, seeing personal advantages in doing so and suppressing any reservations they might have. As Professor Apple said, in the current climate: 'Thinking has become a luxury'. Some genuinely democratic developments can be found outside the mainstream of schooling but he warned that we shouldn’t be romantic about these. Progressive reforms could have unexpected consequences or be used by traditionalists as excuses for the state withdrawing financial support. Constant vigilance is required to detect and respond to the many strategies used to maintain deep social, economic and cultural divisions.

I asked myself why nobody in Scotland seemed to be articulating this kind of argument. The Scottish educational establishment conducts its discussions within a depressingly narrow frame of reference, eager to reach an easy consensus and avoid anything too controversial. The intellectual breadth and vitality evident in Professor Apple’s presentation is absent from the deliberations of policy makers, who are afraid to address the big questions that are so central to his analysis. As I left the building after the lecture, I recognised a few of the 'great and good’ in Scottish education. Given the inspiring performance we had just witnessed, they looked strangely awkward and embarrassed. Don’t tell me they were reflecting on their own limitations and failures?

Saturday 18 June
The best-selling author John Grisham (one of whose novels I am currently enjoying) presents a very unflattering picture of the American legal profession. His novels are peopled with corrupt police officers, politically-motivated judges, greedy corporate lawyers and shysters who think nothing of bending the rules of legal process. Grisham knows what he is writing about, having worked as a criminal defence lawyer for more than 10 years before becoming a full-time author. He may be writing fiction but his stories have a sound basis in fact. His books are now published worldwide and have been translated into more than 40 languages.

Much of Grisham’s success can be attributed to his narrative skills in developing a clever plot, creating flawed but interesting characters and writing in a direct style that keeps the reader engaged. But part of the appeal is a widespread distrust of members of the legal profession which extends far beyond the United States. It is perceived as a profession that, in too many cases, places its own interests above those of its clients and, when complaints arise, uses a variety of techniques to evade responsibility – delay, evasion, obfuscation.

We could do with a Scottish Grisham, someone with enough inside legal knowledge to expose practices that cast doubt on the complacent self-image promoted by lawyers, presenting themselves as beacons of probity and integrity. But, as in so many other areas of our national life, conformists collude to maintain a particular version of reality and critics are silenced, marginalised or persuaded that it would not be wise to rock the boat. Maybe that’s why so many lawyers go into politics: to make progress in both occupations, a willingness to engage in ethical compromises is essential.