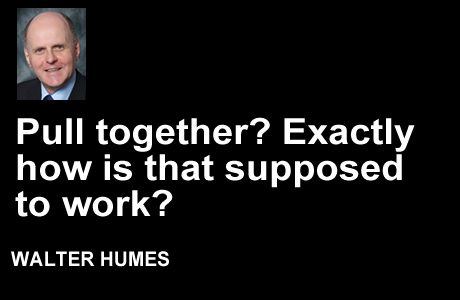 It would be a mistake for those of us who supported the Remain side in the EU referendum to indulge in a period of wailing and gnashing of teeth. The result is narrow but clear, and we have to live with the consequences. Our first task is to interpret what has happened and then to decide how best to respond.

The United Kingdom is clearly a deeply divided nation. The most obvious demonstration of this is the contrast in voting patterns in different parts of the country. Scotland, Northern Ireland and London voted strongly in favour of Remain. Wales, large sections of the Midlands and much of Northern England were firmly on the side of Leave. It is difficult to see how well-intentioned statements that we must all now pull together and reach some kind of consensus that can be made to work.

There are other aspects of division that cannot easily be healed. During the campaign, members of the Conservative Party have been at each other’s throats in ways that won’t be quickly forgotten. Now that David Cameron has announced his intention to resign, there will be an inevitable jockeying for position among potential candidates for the leadership and those who aspire to cabinet positions. The new PM is likely to come from the right of the party: that is unlikely to promote a spirit of national unity.

The Labour Party has its own internal divisions among the parliamentary party, but perhaps more serious is the fracture between the leadership and traditional Labour voters. The result of the referendum shows that in places where it could previously count on solid support, there has been a dramatic loss of trust in the party’s ability to respond to the hopes and fears of ordinary folk. Immigration has served as a focus for much of the discontent, but there are grounds for thinking that it has acted as a proxy issue for other policy issues as well – inequality, health, housing, austerity. Nigel Farage and UKIP have found depressed towns in the north of England to be fertile ground for their brand of populism. They have presented themselves as champions of those without a voice, in contrast to the neglect of the Westminster establishment.

The position in Scotland offers the starkest evidence of political division. Every area of the country voted in favour of remaining part of the EU, but that preference has been negated by the overall UK result. This gives the Scottish Government and SNP supporters powerful grounds for maintaining that, yet again, the UK government has no democratic mandate north of the border. The strength of the Remain vote in Scotland can be explained partly by the fact that it was the official position of the SNP but also, I suspect, by the lack of appeal of UKIP and Farage to Scottish voters. Disenchanted Labour supporters in Scotland, unlike their southern counterparts, simply could not bring themselves to vote for a campaign that they perceived as deeply prejudiced and, in some cases, openly racist.

It can be assumed that a second referendum on Scottish independence is now on the agenda, triggered by the 'material change of circumstances’ which Nicola Sturgeon has referred to as a justification for holding it. The EU decision constitutes such a change of circumstances. If, as seems likely, the post-Cameron era shifts the Tory administration in Westminster firmly to the political right, that may well cause some of those who voted against Scottish independence last time to reconsider their position. For example, Boris Johnson clearly has some appeal in the south of England but very little in Scotland, where he is seen as a bombastic Tory toff and something of a clown (albeit a rather dangerous clown). Against this background, a second referendum on Scottish independence would almost certainly lead to the break-up of the UK. Already there are calls from republicans in Northern Ireland for a review of that province’s constitutional position in the light of the disparity between the support there for Remain and the overall Leave result.

Those on the winning side in yesterday’s referendum will no doubt be elated by the outcome, but their celebrations could be rather short-lived. They will be under pressure to provide evidence that they can produce some of the outcomes they have promised. How exactly will they bring about a significant reduction in immigration numbers? The claimed financial benefits of leaving the EU are unlikely to show in early improvement of public services, if at all. No longer can popular predictions of increased democracy and freedom simply be asserted: they have to be demonstrated in actions and visible results. The task, therefore, of those who voted for Remain is to keep asking hard questions about the details, to make the victors accountable and, where necessary, to expose their deceptions and false promises. Rather than seeking a shallow and dishonest 'consensus’ in the interests of 'national unity’, the principled response might be to see contestation as a sign of continuing democratic engagement, as a means of ensuring that we do not simply replace one unrepresentative elite with another.

There are also wider international implications to what has happened. Before the election both Vladimir Putin and Donald Trump expressed support for Brexit. When the results were announced, far-right parties in France and the Netherlands called for similar referenda in their countries. If the whole European project begins to disintegrate, leaders of the Leave group could soon find themselves consorting with very unsavoury company. I hope they give careful thought to the peace and security implications of such associations.